Focused on strategic philanthropy, this woman entrepreneur’s foundation hopes to impact a billion lives with dignity and equity 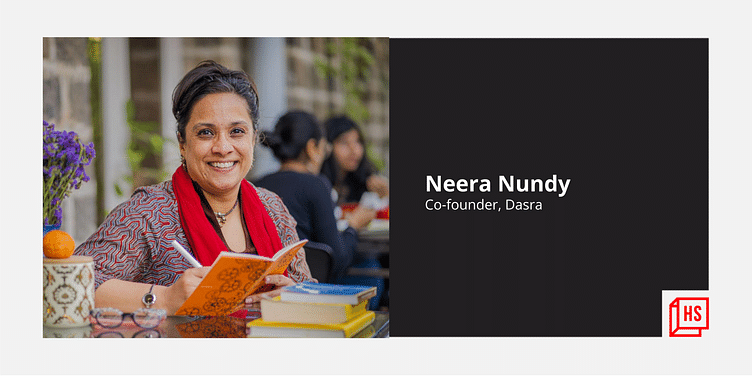 Neera Nundy is the co-founder of Dasra, a foundation that drives individual philanthropists, families, foundations, and corporations to collaborate with non-profits, government, and other stakeholders as ‘development risk capital’ providers to scale up impact.

Neera Nundy’s first grassroot experience of rural India was with the day school for Adivasi children her mother had set up near Kharagpur in West Bengal. This experience was deeply imprinted in her mind and much later, prompted her to make the transition from an investment banking job in the US to co-found ﻿Dasra﻿.

Born in Canada, Neera completed her MBA from Harvard Business School and worked with Morgan Stanley and UBS Warburg.

“At Morgan Stanley, I met Deval, my co-founder, and we started discussing the idea of using the same corporate principles to the non-profit sector by finding good-quality organisations, investing in management teams, and taking organisations to scale. We started as an NGO for NGOs and continue to evolve ourselves while keeping NGOs at the centre of everything,” she says.

While Deval quit his job and moved to India to start up in 1999, Neera stayed on and completed her degree from Harvard Business School, and joined him four years later, in 2003.

After spending three years working with a small group of philanthropists, they realised that the model of hands-on investing could be opened up to a larger donor base to achieve greater impact and that’s when they changed the name to “Dasra”, which means “enlightened giving” in Sanskrit and stopped calling themselves a venture philanthropy fund.

Neera believes that India’s social sector is still evolving and there are challenges for NGOs to get the right kind of support and for “givers” to be able to identify credible NGOs to fund.

Dasra is the intermediary that brings the “evidence of why” with the creativity of storytelling to make compelling cases for NGOs and provides data-led research to objectively help meet “givers’” interests.

She elaborates, “Dasra drives individual philanthropists, families, foundations, and corporations to collaborate with non-profits, government, and other stakeholders as ‘development risk capital’ providers, to scale up impact. So far, we have partnered with 300+ families, 3,500 corporates, philanthropists, foundations, and Rs 1,000+ crore redirected for the development of communities in India.”

Dasra works with organisations across different stages of maturity and sectors to strengthen leadership and accelerate growth. It has been part of the scaling journey of India’s leading non-profits such as SNEHA, Magic Bus, Educate Girls, Shelter Associates, and QUEST Alliance.

Since its inception, it has supported 1400+ non-profits, 650 leaders from 460 organisations. Through its thought Leadership, knowledge creation, and dissemination, Dasra has published over 500 reports, videos, articles and other communications on India’s development sector.

The initial days were challenging.

Neera recalls, “When we first started, it was daunting to even meet the heads of organisations because many of them said, ‘Look, we just want money; we don’t want hands-on support’ or ‘If you give us money, let us do what we want with it’. Then, with the funders, the challenge lay in convincing them to fund management costs and scale the organisations, even putting three-to-five-year operational plans in place.”

They started from ground zero, building relationships with organisations on the ground by providing them capacity-building support, enabling them to realise why focusing on institutional building would be relevant. And on the donor’s side, the task was to educate them on what the gaps in the sector were and teaching them how they could give more strategically.

Dasra collaborates with various central and state ministries, individuals (HNIs, UHNIs,), foundations and corporates, to strengthen partnerships between civil society and government, in focused fields that include Adolescents, Urban Sanitation, and Democracy and Governance.

The impact has been far-reaching. It’s BackTheFrontline campaign galvanised a movement supporting and directing resources to 152 NGOs across 31 states and union territories in India with a $10+ million relief fund that has impacted close to 2.4 million lives.

“Our work also focuses on adolescents with priority outcomes driven towards completion of secondary education, increasing agency, delaying marriage age, and delayed pregnancy. Through 10to19, Dasra’s adolescent collaborative, we aim to unite social organisations, funders, technical experts and the government to empower and positively impact the lives of millions of adolescents across our non-profits’ network of 25 states,” Neera says.

Dasra has also been working to improve sanitation in urban India across the sanitation value chain, right from containment of faecal waste, to its transport, treatment, and proper disposal. It works with the Bill and Melinda Gates Foundation and also co-facilitates the National Faecal Sludge and Septage Management Alliance (NFSSM Alliance), which was instrumental in passing India’s first national policy on Faecal Sludge and Septage Management (FSSM) by the Ministry of Housing and Urban Affairs, Government of India in 2017.

Bringing the evidence of “why”

Neera emphasises that Dasra’s focus has always been to bring the “evidence of “why” to an otherwise subjective sector where “giving” is primarily based on inclination and interests.

“We have worked with a large group of funders including corporates and corporate foundations and advised on developing a strong portfolio of high-impact organisations, provided access and bettered granular understanding of different sectors while improving “giving” practices to focus on the “how” rather than the “how much” of giving,” she adds.

The foundation does not have any direct competitors in the market as it accelerates social change by driving collaborative action through powerful partnerships among a trust-based network. It works with partners such as Sattva, EdelGive, Bridgespan, and The/Nudge foundation.

Neera explains, “When working for the vulnerable communities of India who have been further deprived because of the pandemic, a siloed approach cannot work. Dasra’s work is, therefore, towards enabling every Indian to thrive and live a life of equity and dignity.”

Dasra secures funding from philanthropists, foundations, and families, which is then disbursed to NGOs for them to continue their work with the vulnerable communities.

“When the idea of applying investment banking practices to the social sector took seed for Deval and I, we created a power point presentation about the cause and went around our Morgan Stanley office asking for funds, managing to collect $500. We then found the courage to approach former Morgan Stanley Chairman Richard B Fisher who gave us a cheque for $162,000 (about Rs 1.15 crore) and a commitment for $50,000 (Rs 35.7 lakh) every year for the next five years. Omidyar Network gave us our first growth funding in 2018, which helped us build a second-rung of leadership to grow and scale,” she shares.

Dasra has also recently institutionalised a long term resilience building fund with the Tarsadia Foundation for the next five years to support 500+ NGOs with flexible annual funding of minimum Rs 10 lakh along with support for capacity building.

The biggest impact of COVID-19 on Dasra was making urgent, flexible, unrestricted funds available to NGOs proximate to vulnerable communities.

“We don’t see the impact of the pandemic reversing any time soon and believe that a long-term, patient fund is necessary to be able to continue to work with proximate NGO leaders in alleviating issues and building communities that were or are on the verge of collapse because of COVID’s successive onslaught. That is why we have set up a resilience building fund with Tarsadia Foundation to develop shock-proof NGOs so that India is prepared for any future pandemic. The goal is to raise $50 million by the end of five years and provide flexible, unrestricted grants to 500+ NGOs,” Neera says.