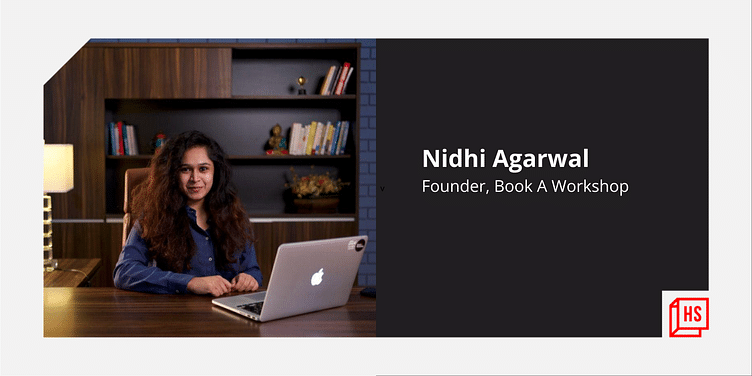 Mumbai-based entrepreneur Nidhi Agarwal revels in being able to curate learning experiences. When COVID-19 put her community-based learning initiative 'WHIS After Hours' to an abrupt end, she tapped the fast-growing online learning market by starting 'Book A Workshop'.

Nidhi Agarwal was raised by two educationists running a school in Nashik. This inadvertently meant Nidhi grew up in an environment where everyday conversations revolved around school curriculum and ways to improve the learning experience for children.

“I was practically born in a school,” she chuckles, sharing the many unique experiences of growing up, but these, however, did not pave an easy path to her eventually starting an online learning platform. It took a journey in self-discovery and curiosity to arrive at entrepreneurship, and start ‘﻿Book A Workshop﻿’ during the pandemic.

Armed with a bachelor’s in mass communication degree from Usha Parvin Gandhi College for Management, and a business in art studies from Sotheby’s Institute of Art, New York, Nidhi began her career by starting Fitoor, a promotion agency that undertook various branding and advertising services for over 50 clients.

“I was trying to create an art promotion company but one thing that does not end up selling in India is art. That was not making money for us and so, we switched our model to becoming an ad agency and it was glamorous,” she tells HerStory.

However, Nidhi says there was a moment of epiphany, and she shut down the business within a month in 2018.

“One day I just woke up and thought about my contribution to this world. There was a moment of epiphany that kind of hit me. And I don't know what happened, but I just ended up shutting everything down to figure out what I wanted to do,” she shares.

In 2018, Nidhi started her own TEDx programmes in Nashik, which, she says, completely changed her perception of learning and content online.

She explains, “The curation process behind Ted videos is brilliant; it focuses on one idea, and everything in the talk needs to support that idea. I was constantly working with the speaker as the representative of the audience. It teaches you to simplify everything.”

While helping her parents run their school in Nashik at the time, she noticed that the campus space was empty after 4pm every day. Deciding to leverage the empty space, she launched her company ‘WHIS After Hours’ by turning the school campus into learning centers for people of all ages. As it began conducting workshops, courses, and various community-based events, it also tied up with institutes like SP Jain, Shankar Mahadevan Academy, and Indian School Of Design Innovation in Mumbai to set up short-term diploma courses in Nashik.

“At one point of time, we had about 50 classes going on. These were different kinds of classes from art and craft to dancing, yoga, robotics, emotional intelligence, football, basketball, cricket, and everything,” she says. Parents who dropped off their children for activity classes and usually waited outside started showing an interest in joining other classes. It also organised a family fest called Treat Street which was attended by more than 6,000 people.

Just when Nidhi felt like she had found her calling, along came the pandemic. With several lockdowns imposed one after the other, and the world at large in disarray, things started to change.

"I was pretty depressed. For a whole month, I was just lying down and not doing much except watching TV and again, clueless as to what to do with my life.”

However, a website URL called ‘Book A Workshop’ that she had bought months back came to mind, and Nidhi toyed with the idea of starting an online learning space, a sector which was growing exponentially during the pandemic.

She began by hosting 15-minute-long live sessions on Facebook on skills like acting, dancing, fashion, calligraphy,  and even how to make popsicles at home. These videos went on to garner more than 50,000 views.

Leveraging her network of well-known experts across fields and an initial investment of just Rs 20,000, she officially launched ‘Book A Workshop’ in 2020. Priced between Rs 350 and Rs 8,500, the platform caters to about 25,000 paid learners, and saw people from Canada, America, Paris, Germany, and some remote parts of India as well as Europe signing up for these workshops.

Now, ‘Book A Workshop’ has also formed B2B partnerships for about 40 of their courses that deliver DIY kits to the learners.

Going forward, the entrepreneur in Nidhi wants to target one lakh paid customers and introduce over 100 DIY kits by the end of 2022.

Nidhi feels dabbling with multiple forms of learning across skill sectors, as well as the unique combination of DIY kits along with the video tutorial to master a skill, is what differentiates Book A Workshop from other players in the market. Vouching for the reachability and potential of online learning platforms, the entrepreneur says she does not plan on taking to the offline model again anytime soon.

When asked about lessons from her journey as an entrepreneur, Nidhi says, “Ask the right questions, and ask a lot of them. Also, stop chasing perfection.”