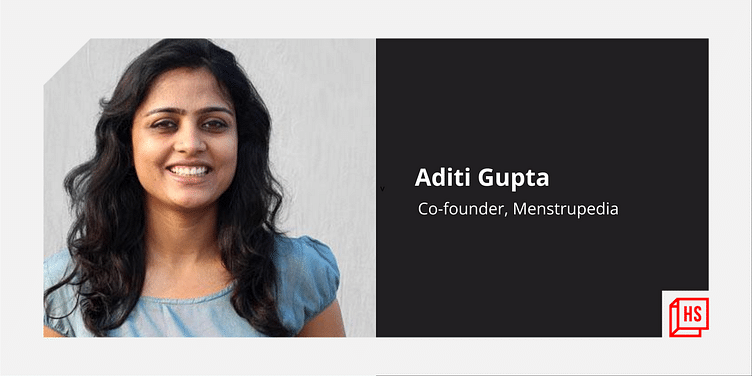 When Aditi Gupta and Tuhin Paul started ﻿Menstrupedia﻿in 2013, the entrepreneur ecosystem did not understand why the founders wanted to educate young girls about menstruation. They saw no business value in it.

Recalling the initial ruthless days of being an entrepreneur wanting to bring about a change, Aditi says, “Everybody would tell us in a very patronising way--kitne gadhe ho tum (how much of a donkey you are).”

Graduates from the National Institute of Design (NID) and many business experts said Aditi and Tuhin had jumped into entrepreneurship without knowing much about it.

“For a really long time, the entrepreneurial ecosystem could not understand, and I actually felt bullied many times. As incubatees, the mentors ended up scaring and demeaning us so much that I lost my cool one day and cried,” says Aditi.

Today, Aditi has been recognised as a Forbes India 30 Under 30 achiever and one of BBC’s 100 influential women.

On Menstrual Hygiene Day, she reflects on the startup’s journey in building a successful business around menstrual health education and its far-reaching impact.

For a long time now, menstruation has been considered a taboo in India. Women are considered impure and often advised not to touch others or cook while they are menstruating.

Seeing early education as a way to inform young girls and the society at large, Aditi’s Ahmedabad-based

startup Menstrupedia started designing comics for adolescent girls and boys, which are now circulated in more than 11,000 schools in India.

“I think millions of girls have studied about periods at the right time with our comic books. And when they grow up, they pass on the learning and experience to younger girls,” says Aditi.

She says, one of the biggest impacts the startup has created was to prove that it is possible to have a positive conversation around period and pave the way for other brands to pick up the techniques of using positive content and conversations to sell menstrual products.

Outside India, the comic books are sold in nine countries, including Nepal, Uruguay, and Hungary. The trick that worked was to present the topic in a non-threatening and culturally sensitive way.

In India, the startup has partnered with the state governments of Punjab, Jharkhand, and Andhra Pradesh, as well as corporate social responsibility (CSR) projects for companies like ITC Limited, JSW, Biocon, and Reliance Foundation.

In addition to the books, Menstrupedia organises masterclass for educators in all Indian languages to make sure trainers are skilled in teaching young girls about menstruation.

This includes lessons on topics like setting up a business, scaling and funding, changemaking, and designing menstrual health courses, which was attended by people from 25 different countries.

As finding skilled trainers is a very expensive process for organisations, Menstrupedia’s free masterclass videos are made available for free.

“This became a huge marketing tool for us. Organisations would use these free tools for years and when they have the budget, they place orders at Menstrupedia,” she says.

As the business is heavily reliant on physical sales of books, Menstrupedia faced some challenges as it did not see any sales for a few weeks during the coronavirus-induced lockdown due to shipping and logistic problems.

However, last year, the startup made a profit of Rs 35 lakh and witnessed a total revenue of Rs 1.15 crore.

Although Aditi and Tuhin shook hands on Rs 50 lakh in exchange for 20 percent stake with Namita Thapar on Shark Tank India, the deal currently stands at Rs 25 lakh for 10 percent, which is spent on product development and cost of operations.

Menstrupedia is also partnering with Emcure Pharmaceuticals to develop menstruation-related content for its awareness programme EmWocal.

In spite of Padman, the conversation around menstrual health needs to continue, says Aditi Gupta

Aditi agrees there are regressive conversations going around due to different political forces clinging onto traditional views, with learned people supporting pseudoscience. However, she says the good part is that the conversations that were not happening in ten years are taking place now.

At the same time, “I also saw people from organisations of global repute advising that menstruation is a good thing because it is a cleaning process of the body, which is such a flawed concept. There is a lot of focus on correcting the terminology and being inclusive, but I have worked on the ground and seen the basic information about menstruation missing,” she says.

There is no doubt that Menstrupedia has been fighting to solve a tough cultural challenge, but Aditi notes that convincing the business and startup ecosystem that a product for menstrual education will work was far more difficult than actually doing it.

“Now that we have cracked one taboo topic, menstruation, we want to talk about everything else that people feel uncomfortable or challenging to talk about,” Aditi quips.

(Disclaimer: The story has been updated to correct co-founder Aditi Gupta's quote to state that millions of girls have studied about periods at the right time "with our" comic books instead of "without".)