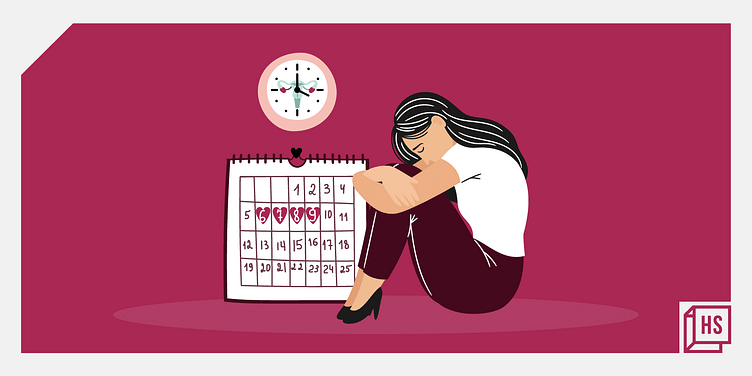 Kerala’s state records show that female students have taken period leave as early as 1912. So, why is there still so much debate around it in India?

Over 32 years ago, one of my classmates had taken a day off because of severe menstrual cramps. And she said so to the class teacher—a stoic nun at my girls-only convent school in Kerala.

I still remember vividly as our teacher whispered in disapproval, “This happens every month and cannot be an excuse.”

This, in a state that has records showing that the Government Girls School in Tripunithura (Ernakulam District) had allowed female students to take ‘period leave’ way back in 1912.

Now, I am in my late 40s and nothing much has changed. The debate surrounding period leave is as “bloody” (pardon the pun) as ever. Whether in schools, colleges, or workplaces, the topic of menstruation still brings in polarising views.

As if women are not suffering enough with the stigma and taboo surrounding periods—whether it’s sanitary napkins wrapped in newspaper and packed in black bags, millions of women are still without access to them, or finding the right ways to dispose of used ones.

The case for period leave

The topic of ‘paid period leave’ seems to be a difficult discussion for many. Should it be different from sick leave? Should there be state-mandated period leaves every month that women can avail of, if and when they need them?

Apart from discriminatory practices in societies that force women to isolate themselves during their periods or poor menstrual hygiene, biological factors too, play a significant role in making the case for period leave.

During their menstrual cycle, women can experience any and all the following symptoms—PMS (premenstrual syndrome), heavy bleeding, abdominal cramps, nausea, headache, and a general feeling of uneasiness and listlessness, among others.

As early as 1992, Bihar had announced a two-day period leave for women working in the government sector up to the age of 45.

In 2017, Mumbai-based digital media startup Culture Machine announced that women employees were allowed to take a day off on the first day of their period. Today, around 12 companies in India offer paid period leave, including Swiggy, Mathrumbi, Magzter, Wet and Dry, IndustryARC, iVIPANAN, Gozoop, and Horses Stable News.

In 2018, the Menstruation Benefits Bill, 2018, was tabled in Parliament, which stipulates two days of menstrual leave and better rest facilities at the workplace. However, it is yet to receive assent.

When food delivery giant ﻿Zomato﻿ in 2020 announced that women can avail of up to 10 days of period leave in a year, it sparked extreme reactions. While the “gender inclusive” policy was hailed by many, others were quick to point out the tone of the announcement.

Founder and CEO Deepinder Goyal in a blog post said, “There shouldn’t be any shame or stigma attached to applying for a period leave.” But he also added, “These leaves should only be availed if you are really unable to attend to work. Do not abuse these leaves or use them as a crutch to take time out for other pending tasks.”

While we leave it to you dear readers to deliberate on whether this was a warning, caveat, or a matter of concern, it’s time to bring old-fashioned empathy into the picture.

Sorry Zomato, as woke as your decision on #PeriodLeave is, this is exactly what ghettoizes women and strengthens biological determinism. We cannot want to join the infantry, report war, fly fighter jets, go into space, want no exceptionalism and want period leave. PLEASE.

Which brings us back to the question—why do some women ask for period leave? Because each of our bodies is different and behaves differently during periods. How each one of us endures pain is also different.

Why is it difficult to understand and empathise rather than deride it as a statement of wokeness? When a company grants period leave, it’s an acknowledgement and understanding of what women go through for a really long period of their lives. (Although Zomato didn’t really have to imply that women will ‘abuse’ period leave.) If someone has a difficult time, month after month, doesn't she have the right to rest when she feels extreme discomfort or pain brought on by menstruation?

While companies can formulate policies and set things right, women themselves need to be made comfortable about their bodies and speaking about them. Companies, too, need to stop treating it as a favour.

Women are already facing issues that prevent them from addressing their pain. In fact, studies have revealed that period cramps are as serious as heart attacks yet we still think—will I be dismissed as unproductive if I take a day off because I am in too much pain? Then there are other concerns. What if I have a female manager who does not take one, will there be an unfair comparison between us if I do?

Personally, I have been fortunate enough to cruise through my menstrual cycles most of the time, but when I see a fellow female colleague double over in pain, I can’t help but question the lack of a period leave across the workforce.

The Spanish government recently approved a bill, which grants an unlimited amount of paid ‘menstrual leave’, with the state social security system—and not employers—paying for the medical leave.

Here, the state taking cognisance of a woman's health issue needs to be commended. If introduced in a country like India with a much larger population, the question is, will it take into account women working in the unorganised sector too?

My house help back in my ancestral village in Kerala gets seasonal work, mostly during the sowing of crops and harvesting. She cannot afford to take a single day off in these months even if she has severe bleeding or cramps because that would mean a loss of wages.

A shocking report released in 2019 revealed that 13,000 sugarcane women farmers in Beed, Maharashtra, underwent hysterectomies to avoid loss of wages arising from health issues due to menstruation, childbirth, and others.

Whether it’s a woman working in corporate India or in its villages, women’s health seems to matter very less.

The bottom line is we could all do with a bit of rest—especially on days when our uterus is waging a war within. No battle (or blood) lines need to be drawn and ‘period leave’ can become just another term in the workplace lexicon.