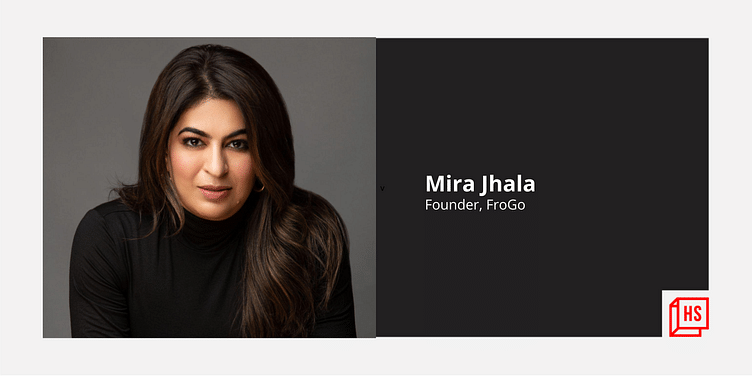 After building Urban Kitchen, Curry In a Hurry, and Purist, serial entrepreneur Mira Jhala has launched her latest, FroGo, an online frozen food product and distribution company with a pilot run in Gurugram.

Mira Jhala knew very early in life that she wanted to be an entrepreneur. Growing up in Ahmedabad, she was surrounded by enterprising businesspeople, like her parents and their friends.

“My father’s business was in the agritech industry and seeing him do path-breaking work was beyond inspiring,” she says.

She is now building her fourth startup,﻿FroGo﻿, an online frozen food delivery company based in Delhi-NCR, that was launched this month.

Mira spent a decade working, studying, and living in the US, but knew that she wanted to start up in India.

Her journey as an entrepreneur had just begun. She then went on to launch Curry In a Hurry in 2013.

“Our order volumes and repeat customer base was great. With the advent of food delivery platforms, the competition in this segment grew significantly. What became clear was that I want to build something of scale (not a lifestyle business) or shut it down – which I did towards the end of 2015,” Mira says.

Interestingly, she feels that shutting down the business was the only way she could think about redesigning the business.

“In 2016, I launched a new company, Purist, with a clear focus on scale and corporate food services. Within two years, there was a lucrative opportunity to sell the business to Cure.Fit – this was the period when they were just entering the Delhi NCR market. This was a critical inflection point in my journey as an entrepreneur. An exit was validation of building something of value. My journey continued with Cure.Fit and I had an incredible time scaling the Eat.Fit vertical in the North to 25K daily orders, across 23 cloud kitchens, and leading a team of 1,500,” she adds.

Last year, when Mira was part of the Senior Executive Leadership Program at Harvard Business School, she built VeritasX with her classmates, who were experts from different fields and industries.

What started off as a round table discussion over coffee on campus at HBS has turned into an active startup investment platform – VeritasX. Together, the members evaluate companies, and when they see the potential, they invest in them and help them scale up.

Marketing momos: Why this woman entrepreneur is betting on frozen food to popularise her family recipe

As a foodtech entrepreneur, Mira believed the time is right for FroGo.

She points out that one of the biggest challenges she has experienced as a food entrepreneur is to preserve the quality of the food throughout the supply chain.

She explains, “Temperature matters, but not many are concerned or aware of it. In India, modern retail and general trade are not designed to offer adequate shelf space and distribution for frozen food as a category. As a result, the industry has not matured and grown to its full potential. FroGo is being built to bridge this gap.”

With this, Mira means that products from FroGo are maintained at a constant temperature of -18 degrees C from the facility to the doorstep of the consumer.

She breaks down the process and explains, “From the moment a product is prepared fresh, it is immediately frozen to preserve 100 percent of its nutrients. FroGo gets these products through ultra-low temperature vehicles from each of the manufacturing places to its facility in the city. The temperature is kept lower than the usual standard that is followed in the country, touching as low as - 25 degrees C. For the last mile journey, the FroGo team wraps its food products with - 22 degrees C cooling devices to ensure that it reaches the customer in the same coldest temperature form with which it started. Thereby keeping the freshness, flavours and the nutrition intact. There are devices and the sensors, which monitor temperature through the entire chain operate in an energy efficient and reusable way.”

“So, when someone orders ice cream, they will receive ice cream and not milkshakes,” she says.

FroGo sources a variety of frozen food products from both well-known and new-age food brands.

Initially, the brand is being launched in Gurugram to test its MVP, following which it will expand to NCR, Bengaluru, Hyderabad, and Mumbai.

Building a market for frozen food

The important thing, Mira says, is also to try and build a culture around frozen food. Customers can use the FroGo app to place orders.

Mira also claims, so far, there is no single company solving for the broken customer experience and lack of distribution in frozen food.

“However, our competition is everyone that provides/serves food. Modern trade, general trade, ecommerce platforms, restaurant aggregators, and even the corner vegetable shop is our indirect competition. We have a single minded focus on the frozen food segment and that puts us at an advantage. I personally have received frozen food ordered on a leading online platform that came thawed and drenched from being completely melted. It was not fit for consumption,” she says.

FroGo’s target audience is the urban and semi urban Indian literate population between the ages of 25 and 45.

The current frozen food market in India is valued at around Rs 10,000 crore. According to a Red Seer report, the market for packaged frozen foods is growing at CAGR of 18 percent much faster than the overall food industry. Within the frozen food market, some of the segments, especially ready snacks and meals, are growing at 30 percent year-on-year.

Mira admits, in recent times, an entrepreneur’s role is glamorised.

“The process of building an entire company from just an idea is not an easy task for anybody. Being a woman definitely adds another layer of challenges. Our society has deep rooted stereotypes. Data shows us the only 2.3 percent of VC funding goes to companies founded by women. It is a very positive sign that a lot of dialogue is happening around this and initiatives are being taken to improve this number and to bridge the gap,” she says.