Marketing momos: Why this woman entrepreneur is betting on frozen food to popularise her family recipe 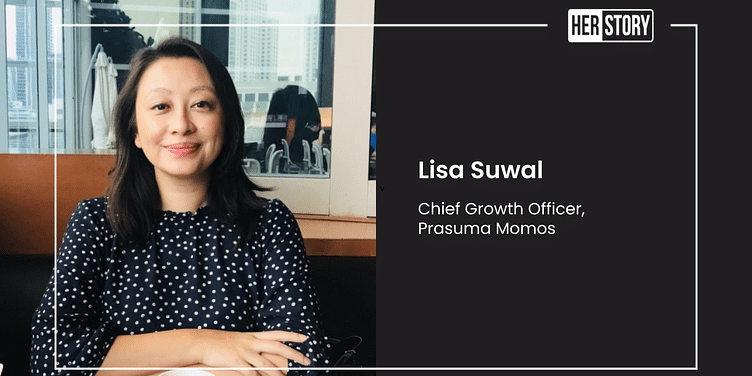 Making a product line based on a family recipe, Prasuma Momos operates on a B2B2C model and is present in 2,500 stores across 70 cities. It now hopes to enter 25,000 stores in 200 cities in the next two years.

“Momos have become popular across India, but they were supposed to be wholesome, comfort food. That was getting lost in its way of becoming a pan-India food,” Lisa Suwal, Chief Growth Officer of Prasuma tells HerStory.

She may well be echoing the sentiment of all those who grew up in households where momos were a staple food, and that prompted Lisa to introduce the product category of frozen momo through her Gurugram-based family business, Prasuma — founded by her father, Mahendra Suwal, in 1985 who started it in Nepal and Gurugram by offering deli meat.

Three decades later, Lisa officially joined Prasuma to assume the role of Chief Growth Officer in 2016. Prior to this, the MBA grad dabbled her hands at marketing, branding, new innovation, and sales at L'Oréal in Mumbai.

“Growing up in Darjeeling and Nepal, momo has always been a staple at home, be it at family gatherings, feeding guests, or any occasion. A lot of people were telling me to launch momo in the market as we had the backing of our food company,” she says.

In 1990, after her father returned from a trip to Italy, he told stories of how traditional Italian families were buying frozen ravioli from the market. Recalling this and seeing the rising popularity of momo, it only felt right for her to experiment with frozen momo in the market.

After five years of research and innovation, ﻿Prasuma Momos﻿ was introduced to the market in 2019. Within two years, it is now present in 2,500 stores in 70 cities and notably, the demand is not only increasing frometros but also Tier II and III cities as well.

Bihari cuisine? Meet the saas-bahu who started up amid the pandemic and are getting over 450 orders every month

A taste of home

Lisa is adamant about the fact that "anything with a filling is not a momo", and thus took it as a challenge to take her generations-old home recipe of making momo and package it into a ready-to-eat product.

This meant shopping for fresh chickens and tying up with local farmers to source vegetables that are then minced at its factory in Gurugram. Lisa claims that the dough is kneaded at least 3,000 times, thinning it to a thickness of 0.7 mm.

“A mix of human and tech ensures consistency and as soon as the momos are made and quality checked, they are frozen immediately. This helps lock in the freshness and nutrition of the product,” she explains.

As maintaining temperature is key for frozen food products, Lisa ensured that until the product reaches the end consumer, the majority of the supply chain (90 percent) is within Prasuma’s control, using its own distribution houses in Bengaluru, Mumbai, and Kolkata. Priced between Rs 150 and Rs 395, the momos come with the options of chicken, mutton, prawn, pork, and veg fillings.

Operating on a B2B2C model, Prasuma’s momo can be found on online marketplaces like BigBasket, Meatigo, Swiggy Instamart, as well as retail stores like Nature’s Basket. “While BigBasket ensures a mass reach, platforms like Meatigo takes us to an audience that is willing to try something new,” Lisa adds.

How a CA and a fashion designer founded preservative-free, ready-to-cook food business during the pandemic

Although largely an American phenomenon, Indians are slowly but surely warming up to frozen food products. In fact, the market for frozen food in India reached Rs 105.6 billion in 2020, according to imarc.

Lisa affirms that freezing is the oldest method of food preservation, and not a compromise on health and nutrition. "Consumers today are changing and amidst the pandemic, they are not only looking for hygienic and better quality products but are also willing to pay a premium for better quality," she says, adding that the market has a more educated audience that understands that frozen food's nutritional value is higher than other packaged food.”

She believes that as a large number of frozen food products are being launched, and with local Kirana stores starting to keep freezers, the market is ripe for deeper penetration. Industry intelligence platform MarketResearch states that the market is expected to reach Rs 224.90 billion by 2025, expanding at a CAGR 18.17 percent.

“Furthermore, there are 30 million Indians in the upper and upper-middle-class households that are consuming frozen food at the moment. This number is expected to reach 200 million in the next three years,” she adds.

However, marketing momo has not been so much of a challenge as momo is already a popular food but ensuring the quality of the product was a concern. But competition has been aplenty, with players ranging from street vendors, cloud kitchens, and upmarket and premium Chinese restaurants. At the same time, HAK Agro Foods and McCain Foods are among the leading players in the frozen food market.

Prasuma’s mantra for expansion, with a presence in 70 cities in a span of two years, is simple: follow the consumer.

“The product has grown through word-of-mouth. We first started in Delhi-NCR. People tried the product, then probably spread the word to their hometown in Punjab, Uttar Pradesh, and other places, and the demand grew in these regions as well. Every city that we decided to enter was because there was demand in that city,” she adds, claiming a repeat customer base of 92 percent.

Citing fierce competition, Lisa declined to share finance relating to sales and revenue, and said that at least 20 to 30 brands have brought similar products since Prasuma Momos entered the market.

The brand also has bold plans to enter 140 cities by March 2022, followed by 200 cities and a presence in about 25,000 stores within two years. Meanwhile, she quips that the plan for the next five years is in place, with the launch of new products that are currently being tested.

Market expansion and numbers aside, receiving no messages from her friends to help with their attempts of making momo and her family not preparing momo at home for the past two years, only to open a packet of Prasuma, may also be overlooked markers of success.