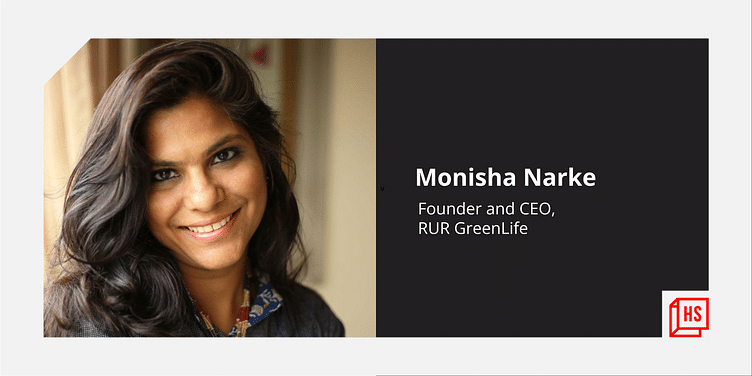 This year, India recorded the hottest March on record—an anomaly that is now 30 times more probable due to climate change, according to a study by World Weather Attribution.

The world also faces a waste problem—that puts an additional burden on natural resources and adds to greenhouse gas emissions. According to the World Bank, with rapid population growth and urbanisation, annual waste generation is expected to increase to 3.4 billion tons by 2050.

Mumbai-based Monisha Narke decided to do something about it when she became a mother.

“My daughters are now well into their teenage years, and when they were born, all sorts of motherly ‘antenna’ went up, and I became more observant and more connected with my environment,” she tells HerStory. Monisha became more concerned about her immediate surroundings, including the air quality and road safety.

In 2009, she started Mumbai-based ﻿RUR Green Life﻿ as a volunteer forum. The vision of the social enterprise is to make citizens eco-conscious through a range of products and services.

RUR stands for ‘Are you Reducing, Reusing Recycling?’

Monisha went about ticking off every goal she had set for herself, including studying at an Ivy League college. However, the master’s graduate in Engineering and Industrial Management from Stanford University says that RUR GreenLife was the only thing that she didn’t plan.

Monisha began by looking for ways to make the surroundings at home and for her family more eco-friendly.

For the first two years, she formed a group of volunteers—professionals who were on a career break—who would go door to door and educate people on the benefits of waste segregation, composting and recycling, and reducing the use of one-time disposables.

“Today, every second person knows about climate change. Back then, sustainability was not known much about and we ran various awareness programmes around sustainable living,” she recalls.

Today, it operates on a dual business-to-business (B2B) and business-to-consumer (B2C) model.

In 2010, Monisha visited a recycling factory for the first time and saw multinational food processing and packaging company Tetra Pak’s packages being recycled, with an entire conference room made out of recycled material.

This convinced her to strike a B2B partnership with Tetra Pak and start its flagship recycling programme Go Green. It was later recognised in 2013 by Limca Book of Records as a unique recycling initiative.

Now, more than a decade later, Monisha continues to run the programme: gathering Tetra Pak waste from 54 collection centres open for any Mumbaikars to deposit their cartons, clean and flatten it, and recycle it into usable products like coasters, pen stands, and photo frames.

So far, the initiative has collected and recycled nine million cartons, according to Monisha. She has also designed aerobic composters that can be used at home to recycle everyday waste. The design is now patented and certified by Indian Green Building Council.

Available on its website and marketplaces like Moglix and Amazon, the recycled goods are priced starting from Rs 150, while community composters can go up to Rs 65,000.

On the B2B front, the enterprise formulates environmental education for schools and colleges, and conducts workshops for corporate employees to sensitise them on sustainable living units and sustainable development goals, among others.

Incubated and seed-funded by Unlimited India, the organisation has ten employees, runs majorly on the support of volunteers, and Monisha herself has not drawn a salary till now.

The initiative aims to target all as waste generation is universal and Monisha hopes to bring change through partnerships and collaborations with like-minded organisations.