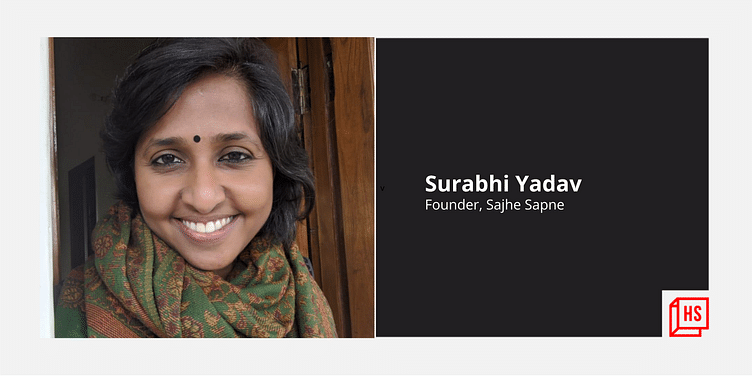 Sajhe Sapne is a social enterprise founded by IIT-Delhi and University of California alumna, Surabhi Yadav. It identifies women from marginalised communities and offers them end-to-end support and training to launch and grow their careers in modern-day jobs.

In September 2020, Surabhi Yadav was part of Covid relief work when she ran into Phula Kumari, a 19-year-old Musahar Dalit woman from Katrasin, Bihar.

Phula made an unusual request that no one in her community was asking for. “Didi phone calls par kuch bhi padha do, main padh lungi,” - teach me something over the phone, anything”.

The literacy rate in Phula’s community is less than one percent.

“And there she was, holding so tightly to her dreams, building a pathway she hadn't seen around her at all in her life. She was desperate to continue her education after the 12th standard - an outlying feat in itself. Her insistence to learn was so real that it led to the launching of Sajhe Sapne in the middle of the pandemic lockdown,” says Surabhi.

﻿Sajhe Sapne﻿ is a non-profit founded by Surabhi to ensure women in rural India have the opportunity for a thriving career. Surabhi has an MTech degree in Biochemical Engineering and Biotechnology from IIT-Delhi, and a master’s in Development Practice from the University of California, Berkeley.

“It was so easy to connect with Phula’s earnest wish to learn and grow because that’s how I was raised by my parents - with lots of abundances to think and create despite limited money. It reminded me of my late mother’s determination to fight for her education - a quiet feat that led to her finishing her education until eighth standard, eventually ensuring all her four children including two daughters studied as much as they wanted, for as long as they wanted,” Surabhi says.

The first step was to identify Sapnewaalis - rural women who are eager to study beyond 12th but do not have the means to do it.

On one hand, she points out, there were Sapnewaalis such as her bhabhis and chachis (aunts) back in rural Bundelkhand, who while she was growing up would often request her “hire us as a cleaning lady in your office, we will learn by seeing you work” - a limited expectation but an earnest wish for self-growth.

“And on the other hand, there are Sapnewaalis such as my mentors, Sandhya Gupta (Aavishkaar), Neha Buch (Pravah), Kamla Bhasin, who constantly set new benchmarks for what dreams could mean not just for themselves but their communities,” she adds.

Surabhi’s dream was to see rural women going places, seeing and honouring their own potential as thinkers, dreamers, and creators.

She elaborates, “This happens in two ways: one way rural women have gotten excited to join our programme is when they see Sajhe alumni in their own villages, and see them working and growing. The second way we get in touch with the wider network of Sapnewaalis in remote areas is through our rich partner network of community organisations and non-profits who have been working in rural areas, especially with children’s education.”

Sajhe Sapne organises information sessions as well as an assessment for interested students. The basic minimum requirement is to be above 18 years of age, at least have studied until 11th standard, know basic English and have a logical acumen, as well as be emotionally prepared to go through a nine-month-long residential programme away from home. Depending on the career track they choose (current ones: Development Management, Primary Math Educator, and Web Development), the level of Mathematical knowledge is also checked.

Once the assessment is cleared, students, with the help of community partners and team conversations with parents, visit Sajhe Sapne’s residential campus in Himachal Pradesh for the nine-month course.

The programme follows inquiry-based pedagogy - the sessions are run by their questions, arguments, and logic, and not by lectures alone.

“The role of educators on campus is to be facilitators and not teachers. It is heavy on assignments, projects, internships, and taking responsibility for your own learning. They are given ways and tools to make an entry into the formal job market’s professional networks so they can help themselves get a job. With our alumni engagement, we ensure they can lean on this group for support and mentoring as and when required during their new jobs,” Surabhi says.

The non-profit is supported by partnerships with other organisations like Aavishkar Yatra, which not only provides mentoring, but has also given it a home – a beautiful campus in Himachal Pradesh. It is funded by Nudge, Social Alpha and Cini by Tata Trusts. “For our two cohorts, students have come with the help of Aavishkaar, Narigunjan, Ibtada, Project Potential, Milaan, Alive Indian Foundation among others,” says Surabhi.

Sajhe Sapne’s first cohort attracted 25 young women from six different states. Everyone graduated with a job offer of at least Rs 15,000 salary, the highest being Rs 25,000.

Surabhi clarifies, “It is not just the salary we focus on as an outcome, but also, mentoring support and opportunities to further grow in skills and salary over time. In the current cohort, we have 45 young women from around 16 different villages in seven different states. They are in the middle of the programme right now, and are interning with places like Feminism in India, Central Square Foundation, People’s Archive of Rural India and more.”

Sajhe Sapne works exclusively with first-generation women learners who are marginalised because of their caste and class.

“Our students come from Mahadalit, Dalit and Bahujan identities in different religions— they are highly disadvantaged caste groups with average literacy rates below one percent, and with some of the highest poverty indices in the country. All our students come from economically and socially disadvantaged families, including women who were married extremely young, daughters of single mothers, etc. Each one of them is a first-generation college-goer - not just in her family but even in her village,” she adds.

The long-term goal is to make Sapna Centers (spaces where women come together to grow their learning, earning, etc) an integral part of village life in India. Surabhi also wants to launch complete education and employment finding packages for different career tracks, and offer them to remote villages through existing government and non-profit channels.

Leading the non-profit is a team of women who are shifting the focus of the development agenda for rural women from their needs (silai-kadai-bunai-beautician) to their wants (opportunities to grow their skills, salary and social status).

“We are transforming the way knowledge is produced and communicated. We do this by curating and creating high-quality professional skill curriculum into non-English languages. We are shifting the way professionalism is defined - from very masculine norms of productivity and leadership - to making room for salwar-suit clad young rural women in offices with glass doors. Every student who has graduated from Sajhe’s first cohort working as a young development practitioner has made a crack in the glass ceilings made by their caste, class, gender, and geography,” Surabhi says.

She looks forward to the day when young women from villages will earn stable salaries, create jobs for others, and take strides of professional growth.

“There would be a day when the mainstream perception of rural women wouldn’t swing between them being either objects of our curiosities (romanticised for their innocence) or subjects for their pity (so much pain), but seen for their complex identities. When that shift in the mainstream gaze from their pain to potential happens, we would have succeeded,” Surabhi concludes.