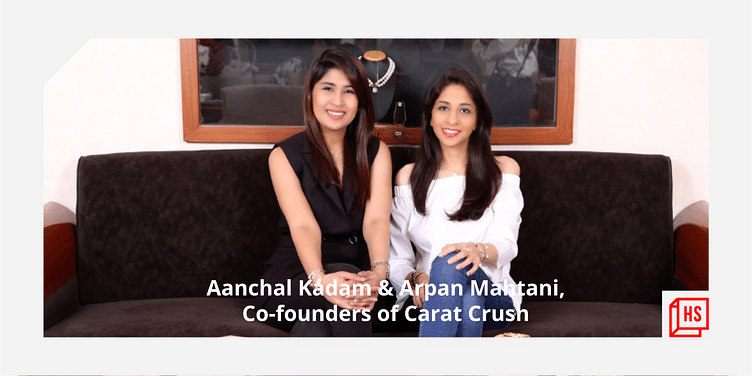 Based in Mumbai, direct-to-consumer brand Carat Crush has about 100 designs including layered chains, lockets of angel wings, and mangalsutras customised specifically for millennial working women.

The big fat Indian wedding is incomplete without gold as gifts. However, when close friends and families gifted gold coins (worth around Rs 20,000 to Rs 40,000 at the time) during Aanchal Mahtani Kadam’s wedding eight years ago, she felt coins lacked a personal touch.

“They would spend on gold coins and usually, you wouldn't even know or remember who gave what,” she tells HerStory.

That is when Aanchal and her sister Arpan Mahtani initially mulled over designing gold jewellery for gifting purposes in the price range of Rs 20,000 to Rs 40,000.

The duo’s prior experience in the jewellery industry came in handy.

Both founders Aanchal and Arpan completed B.Com from HR College in Mumbai. Aanchal holds a Master’s degree in international business with a specialisation in marketing from Aston University in the UK while Arpan pursued Master’s in luxury brand management from Regents University in London. Later, they worked together in marketing and public relations roles at Diamantina Fine Jewels in Mumbai.

As Aanchal and Arpan looked for entrepreneurial opportunities in gold jewellery, they had a clear target audience in mind: Millennial working women.

In 2015, they worked on trendy designs for everyday wear instead of chunky traditional gold jewellery that gets stored in safes.

Based in Mumbai, the direct-to-consumer brand now has a wide range of designs including layered chains, lockets of angel wings, and millennial mangalsutras—a category that offers mangalsutras customised to suit millennial Indian working women—among others.

Available at their stores in Bandra and Delhi as well as its website, pricing starts at Rs 22,000 and goes up to around Rs 1.5 lakh for the mangalsutras. ﻿Carat Crush﻿ has free shipping across India.

With over 100 different styles on their platform so far, buyers can also personalise letterings and designs.

From nutritious food to walks, petcare startup sploot wants to help you be the best dog parents

Indian households often rely on certain jewellers to buy gold, a relationship built on years—sometimes over multiple generations—of trust. Naturally, asking consumers to spend a large amount online was challenging for Carat Crush, which is why making a retail presence early in its journey helped it build trust and confidence among consumers.

“People have come a long way. Initially, there was a lot of hesitation and even a lack of trust but now, they are quite comfortable,” says Aanchal.

Carat Crush’s offline and online channels both equally drive sales at 50 percent each. Consumers also find it easy to order directly on WhatsApp and Instagram, according to the company.

The company says it designs and manufactures each piece in-house so that they are not cloned.

Aanchal states that the company witnessed an annual growth rate of 35 percent. She declined to share figures on revenue or sales.

When asked about competition, she maintains, “There is enough space in the industry for brands to do their thing and find an audience. We have a lot of copies which makes me feel like we are doing something right and on the right track.”

Another startup addressing a similar market–daily wear gold jewellery–is Bengaluru-based Melorra. However, it entered the retail space much later, in 2020, and follows an asset-light business model which is different from that of Carat Crush. Founded in the same year, both target working women in India.

Estimated at $850 million in 2019, the Indian online jewellery market is projected to grow to $3.7 billion by 2025, growing at a compound annual growth rate of 28 percent, according to the Retail Jeweller India.

On being women entrepreneurs

“Gender bias is part and parcel of being in the jewellery industry. Being women in a male-centric industry can be challenging, there were instances where people did not expect anything from us or take the brand seriously initially,” Aanchal says.

These experiences only made the sister duo stay consistent so that the work speaks for itself.

The story has been updated to correct a typo.