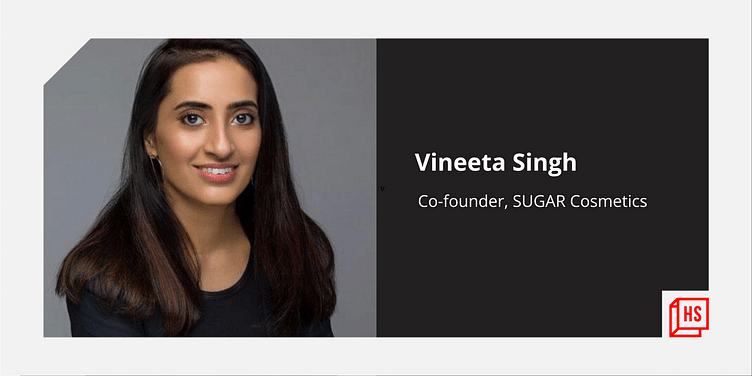 From turning down a Rs 1 crore job offer at 23 to starting a cosmetic brand that is now valued at Rs 4,000 crore, entrepreneur Vineeta Singh has dared to dream different Here are nuggets of entrepreneurship wisdom from her Instagram page.

In 2007, the Indian Institute of Technology (IIT), Madras and Indian Institute of Management (IIM), Ahmedabad alumnus Vineeta Singh made headlines when she declined a Rs 1 crore package job offer from Deutsche Bank. At the age of 23, she decided to take the entrepreneurial route at a time when India's startup ‘ecosystem’ barely existed.

More than a decade later, Vineeta has emerged as one of the most powerful, self-made women entrepreneurs of our time. After multiple iterations, she leveraged social media to build one of the direct-to-consumer brands—﻿SUGAR Cosmetics﻿

A judge on the first season of Shark Tank India, Vineeta’s social media channels, where she celebrates personal and professional milestones, are a goldmine for lessons in entrepreneurship.

Vineeta breaks down key variables in entrepreneurship—place and time, and how they could go either right or wrong.

Mathematically, these two variables can yield four possible outcomes, all of which Vineeta faced as an entrepreneur, until she finally found a sweet spot with Mumbai-based SUGAR Cosmetics.

Between 2008 and 2010, she started an online insurance company which eventually shut down because her team was “early and I didn't really know the industry.”

This Vineeta says was a case of “wrong place, wrong time”.

She had faced the second possible outcome, “right place, wrong time,” in 2007 when she had set out to build a lingerie startup.

Most venture capitalists at the time were yet to recognise the potential of women-focussed businesses. According to Vineeta, VCs felt that investing in businesses that targeted women was too "niche" at the time.

It was between 2012 and 2016 that the entrepreneur found herself in the “wrong place, right time.” She was building a beauty subscription service Fab Bag but sensed a bigger opportunity. She saw that Indian women’s spending power was increasing and beauty bloggers were gaining solid ground.

Vineeta shares that there were only a few people with Fab Bag at that point. She had little money left in the bank and the core business was hitting a ceiling.

One final pivot paved the way towards a “right place, right time” with SUGAR Cosmetics, a brand that is approximately valued at Rs 4,000 crore today.

“The only sure shot way to get to a ‘right place, right time’ scenario is to keep walking till you run out of all possible wrong combinations and are still standing whenever the stars align. It is just that strange. It is just that simple,” she says on Instagram.

Vineeta says that the company found the right market fit by listening to its customers.

“Customer is always the queen,” the CEO and Co-founder of SUGAR Cosmetics adds.

Retail store as a space for visual storytelling for brands

Online channels have become all the rage among direct-to-consumer (D2C) brands today, and rightly so after the COVID-19 pandemic negatively impacted many traditional businesses. However, many founders still believe in the value held by retail stores.

Vineeta took to Instagram to celebrate SUGAR Cosmetics opening its 100th store last week. Her love for the retail channel is clearly visible.

“It's the less glamorous (in the VC world) but more profitable (if done right) cousin of D2C and allows brands to have their own space for visual storytelling, customer education, and influencer engagement,” she says.

“Yes - it is super hard in the early stages for brands to draw footfalls and to break even. But some hard problems are good to solve early on for long-term brand building as well as operating leverage,” she adds.

Funding is not a milestone in itself

In May, ﻿SUGAR Cosmetics successfully closed a $50 million deal in Series D round led by the Asia fund of global consumer-focused private equity firm L Catterton. The fundraising comes at a time when startups are bracing for funding winter and the economic downturn.

However, Vineeta has repeatedly emphasised that funding in itself is not to be considered a milestone, hinting that other factors like sales matter more than just securing funds.

In a previous interview with YourStory, she said consistency and the need to simply show up are more important than chasing certain goals to a point of frustration.

“Got a great JEE rank? Must be “girls’ quota”! Got a great job offer? The hiring manager must be hitting on her! Got funding? Ah, there’s a “male cofounder”! The list is endless,” she points out.

Vineeta says her efforts in building SUGAR Cosmetics were reduced to a joke too where people would ask how clichéd it is that the only female entrepreneur from IIT, Madras in their circle runs a cosmetics company.

However, Vineeta says the best response is not to bother about such people and to continue building the company.

“The burden of trying to prove that women can be as capable as men in any field is not mine to shoulder, because if anyone still has this doubt, it's an endless debate that I don't have time for!” she writes.

(This story was updated to correct a typo)