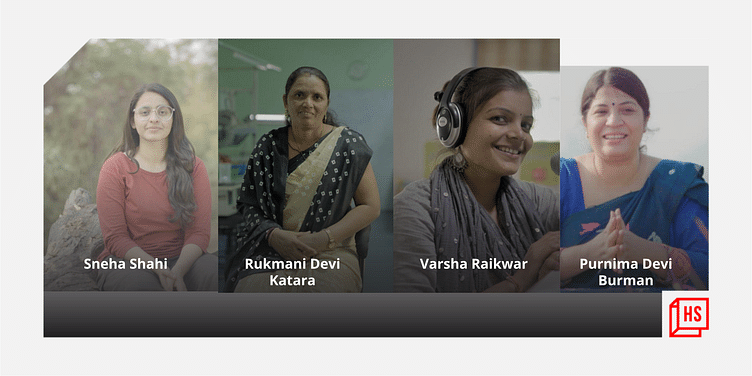 These women changemakers are working in the field of environment conservation and creating awareness in different parts of India.

Every year, on June 5, World Environment Day, we pledge to live sustainable lives, care for the environment, and leave a better planet for our children. But how many of us take our pledges seriously and incorporate sustainability into our day-to-day lives? It could be something as simple as taking bucket baths instead of showers, switching to energy-saving bulbs, or segregating the waste in our homes.

Some of us diligently make the effort to follow environment-friendly practices as we are aware of what causes climate change and how things are going to worsen as days go by. But there is a large part of the population that remains unaware, and for this we need continuous and consistent environment initiatives to drive home the point – whether it’s by organisations or individuals working towards the cause.

There are many women out there, climate change warriors, making a huge difference with their environment-focused initiatives.

Here are a few that caught our attention – and that of the world – as they strive to make this planet a better place to live in. They have also been featured on National Geographic's One For Change campaign.

In 2007, Purnima Devi Burman embarked upon a PhD on the greater adjutant stork (Hargila), a bird that was on the verge of extinction. Little did she know then that she would be kickstarting a mass movement and an Hargila army of women conservationists that would change mindsets and provide livelihoods to thousands.

It took Purnima years and many awareness campaigns to dispel the notion that the Hargila was a bad omen and a bird that dirtied the surroundings.

Purnima procured looms for women weavers who went on to produce beautiful fabrics with Hargila motifs that are now sold all over the world. The mass movement now has more than 10,000 women, all conservationists doing their bit to increase the number of Hargilas in the country.

Due to her efforts, the 27 nests have grown to 250 and the Hargila Army and villagers are ensuring their protection to enable further breeding.

An RJ at Radio Bundelkhand, Varsha Raikwar is at the centre of a concerted climate change awareness campaign where she uses the power of her voice to reach out to 2.5 lakh listeners from over 160 villagers through her daily show, Shubha Kal. They listen to Varsha’s ruminations, advice, and first-hand reports on the effects of climate change, and what can be done at the ground level.

Varsha’s father is a farmer and as a child, she would often see him disheartened when crops failed due to lack of rain. While he would say it’s God’s will, Varsha would disagree.

When she expressed her wish to join the radio, her family was dead against her. Coming from a region where girls are married off in their teens, going out to work was “unheard of”. But Varsha stuck to her decision, and it paid off.

“My approach is positive – I educate them on diverse ways by which they can make a difference in their lives and live sustainably – rainwater harvesting, organic farming, discarding plastic, planting a kitchen garden, and more. We also asked our listeners to let us know if they had done something new, and featured that on our show,” she told HerStory in an earlier interview.

While she was a student of MA Environmental Studies at the Maharaj Sayajirao University of Vadodara, Sneha Shahi became part of the UNEP Plastic Tide Turner programme, which brought over 300 students together, and raised awareness on environment conservation.

During this time, she and her team came across an urban stream named Bhukhi, 7.5 km long and linked to the river Vishwamitri. Initially, they thought it was a nala (drain) but on mapping, it turned out that it was a natural rivulet, which was not even marked by the municipality as smaller systems like these often go neglected.

On digging deep they found that it had been clogged with plastic and solid waste to an extent that there was no movement of animals, especially crocodiles that were rampant in its waters earlier.

The team removed 700 kg of plastic waste and at the end of it, the crocodiles they saw only once a year during the rains, began to appear regularly, with the team continuing to monitor them.

Married off at the age of 13, Rukmani Devi Katara’s life would have been confined to one behind ghungat had she not had the will to take it in her own hands.

The first step toward change was when Rukmani was introduced to the Rajasthan State Rural Livelihood Mission or Rajeevika, which encouraged her to start a Self-Help Group (SHG) in her village in Dungarpur, Rajasthan.

Through this Foundation, members of the SHG were able to set up small ventures of their own. Some bought cows and buffaloes while Rukmani started a kirana shop in the village.

However, it was the Dungarpur Initiative launched by IIT-Bombay in 2016 that really turned around the lives of Rukmani and the women in the region.

Headed by Professor Chetan Singh Solanki, Solar Saheli was launched as part of the SoUL project in conjunction with Rajeevika and the district administration that organised four clusters from SHGs in the region.

Rukmani and other women were trained in assembling solar panels. The presidents of the four clusters—from Antri, Biladi, Jhontri, and Punali—then signed an MoU with IIT-Bombay to start manufacturing solar panels and lamps. The entity was named Dungarpur Renewable Energy Technologies Private Limited (Durga Energy).

Initially, Rukmani worked as an employee of Durga Energy. She was promoted to supervisor and within a year became the CEO of the company.

Each Solar Saheli earns between Rs 8,000 and 16,000 a month. Her vision for the company is to expand the team of women from 55 to over 1,000, and touch every part of the state, and eventually, the country.