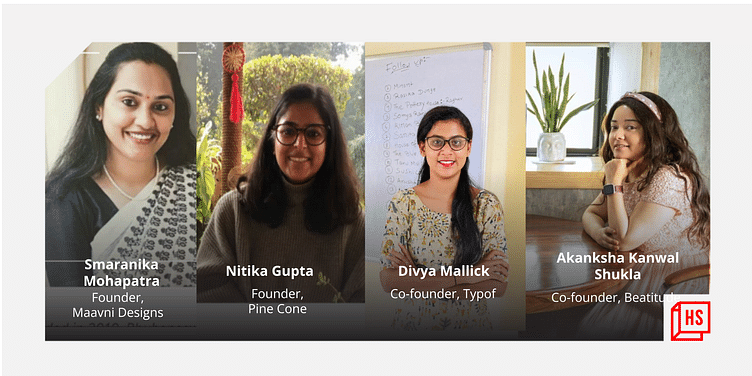 These women entrepreneurs are leveraging technology to help artisans and weavers across India find a sustainable income and market for their products.

India is home to a rich handicraft culture, which has been preserved by the hard work and passion of weavers and artisans across the country. According to IBEF, the total handicraft exports from India reached $3.5 billion in FY20.

However, the sector has been on a steady decline. It is seeing an exodus of craftspersons, especially the younger generation, to cities in search of better opportunities, threatening several traditional practices into oblivion.

Amid the accelerated digital adoption, many artisans and weavers also find it difficult to keep up with the dynamic ways of conducting business online. This is where new-age entrepreneurs step in to strike a balance between the old and the new.

Akanksha Kanwal Shukla and her husband, Pushkar Shukla, noted that most traditional Indian attires in the market did not have a modern appeal. In June 2015, the duo decided to start ﻿﻿Beatitude﻿ to provide handwoven, handcrafted, and designer sarees as well as dupattas, blouses, premium stoles, and handmade jewellery.

Akanksha says they began by working with weavers and artisans, who used to be paid poorly, and ensure they got paid directly by Beatitude.

So far, the brand has worked with over 215 weavers and more than 692 artisans across Maharashtra, West Bengal, Andhra Pradesh, Tamil Nadu, Madhya Pradesh, Jammu and Kashmir, and Uttar Pradesh.

It relies on an online channel of sales, including its website and social media platforms including Instagram and Facebook. Sales from social media contribute to around 33.6 percent of its revenue.

Beatitude claims to have more than 3.17 lakh users, and its target group includes people with a monthly income of at least Rs 80,000. Most of its clientele hail from Pune, Mumbai, Delhi, Bengaluru, Chennai, Hyderabad, and Kolkata. The products are also shipped to over 87 countries, including the US, the United Kingdom, Australia, Belgium, Canada, France, and the UAE.

Bhubaneshwar-based entrepreneurs Divya Mallick and Trilochan Parida noticed that many online marketplaces charge an onboarding fee from local artisans, which cuts into their revenue. They decided to make ecommerce affordable and easy to use for the artisans through their SaaS (software-as-a-service) startup ﻿Typof﻿.

Founded in 2021, the startup aims to build a “Shopify for artisans” where artisans can choose a website template with a custom domain and all the required ecommerce tools such as an integrated payment gate and logistics options, among others.

The platform has also incorporated a live video shopping tool that allows artisans to directly connect with the customers to discuss product authenticity and other concerns they may have.

With more than 400 artisans on the platform, Typof does not levy any listing fee but operates on a commission-based model. The startup charges a 10 percent commission per transaction.

Nikita Gupta grew up in Jammu, a place known for its rich handicrafts and culture. Noticing the decline of arts and crafts, with artisans looking for other means to earn a livelihood, she decided to take a leap into entrepreneurship.

In 2020, she founded Delhi-based home decor startup ﻿Pine Cone﻿. Nikita began by working with the artisans; she would initially sketch the designs, sit with the artisans till the prototypes were made, and then discuss cost and pricing. The D2C (direct-to-consumer) brand leverages Instagram as the main channel of sale, and some offline stores in Delhi and Hyderabad.

A NIFT and IIM Calcutta alumnus, Nikita now works with artisans–90 percent of them being women—across Assam, Manipur, parts of Himachal Pradesh, and Jammu.

Bootstrapped with a turnover of Rs 9 lakh in FY22, Pine Cone hopes to achieve 10X growth by the end of 2025.

After almost a decade-long career in the IT sector working with companies like TCS and JP Morgan Chase, Smaranika Mohapatra decided to return to her home in Bhubaneshwar and work on the handicrafts that she had always cherished.

Founded in 2019, her venture ﻿Maavni Designs﻿ promotes Odisha’s handicrafts across the country. Maanvi is a combination of two words—Ma for Mother, and Avni, which means Earth.

A manufacturing and ecommerce company, Maanvi works with artisans to make and sell home decor products, apparel, and accessories.

With monthly average orders of 300 to 500, the bootstrapped startup ships products to customers from Singapore, Dubai, Malaysia, the UK, and the US as well. Maanvi claims that its goal is to ensure a steady income for artisans.