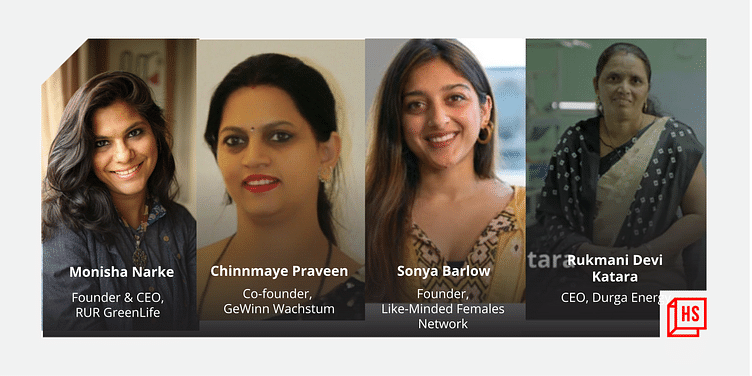 It is not easy to become an entrepreneur, and it is probably even more difficult to build a business or a non-profit organisation that focuses on the greater good.

But, by uplifting those who are less privileged, these ventures help societies reap benefits over generations.

Here are four women who took the entrepreneurial plunge for the greater good.

Monisha Narke’s priorities in life changed when she became a mother, and the effects of environmental degradation became an immediate concern. In 2009, she launched ﻿RUR Green Life﻿, ﻿which stands for ‘Are you Reducing, Reusing, Recycling?’

Based in Mumbai, the social enterprise aims to make citizens eco-conscious through a range of products and services.

Its longest-running programme is Go Green, a B2B (business-to-business) partnership with Tetra Pak, which was recognised in 2013 by Limca Book of Records as a unique recycling initiative.

RUR Green Life gathers Tetra Pak waste from 54 collection centres across Mumbai, recycling them into products such as coasters, pen stands, and photo frames, available for sale on its website, starting at Rs 150.

The enterprise also sells patented composters designed by Monisha. In its B2B initiatives, it formulates environmental education for schools and colleges and conducts workshops for corporate employees to sensitise them on sustainable living units and sustainable development goals, among others.

Based in Bengaluru, the startup installs “water ATMs” across Karnataka to help underprivileged people get access to safe drinking water at affordable rates.

Priced at just Rs 5 for 25 litres of water, it has installed more than 900 drinking water dispensers across Karnataka. During the pandemic-induced lockdowns, all the water ATMs were kept running 24x7, and every Wednesday, water was dispensed for free.

In 2018, award-winning diversity champion and author Sonya Barlow started ﻿﻿Like Minded Females﻿ Network (LMF) as a small initiative encouraging women from diverse backgrounds to talk about careers over brunch meetings, a project that turned out to be an epic failure.

When the COVID-19 pandemic broke out in 2020, she was left without an income and decided to give LMF another try.

The not-for-profit social enterprise has since facilitated over 200 workshops, worked with over 100 partner organisations, and Sonya single-handedly grew the LMF Network to a global social community of over 50,000 women.

Like many women in rural Rajasthan, Rukmani Devi Katara was married off early at the age of 13 and could not continue her studies beyond Class 8.

In 2016, IIT Bombay launched the Dungarpur Initiative that trained women as Solar Sahelis in conjunction with Rajeevika and the District Administration.

Rukmani’s first experience in entrepreneurship was setting up an SHG, where the members got funds from the Rajasthan State Rural Livelihood Mission to set up their small ventures.

Starting as an employee and learning to install the solar panels, Rukmani eventually became a supervisor and then CEO of Durga Energy. She now aims to expand the team of women from 55 to over a thousand.