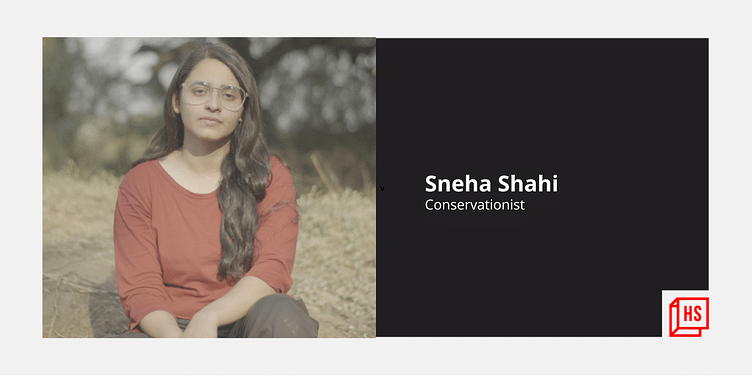 In 2019, Sneha Shahi led a team of volunteers to clean up the Bhukhi stream, linked to the Vishwamitri river in Vadodara, to remove 700 kg of plastic waste, following which crocodiles that were part of the waters, began to appear regularly.

While she was a student of MA Environmental Studies at the Maharaj Sayajirao University of Vadodara, Sneha Shahi signed up for the UNEP Plastic Tide Turner programme, which brought over 300 students together, and raised awareness on environment conservation.

From Bihar, Sneha had travelled and lived in different places in the country as her father was in the Air Force. When her family settled in Vadodara, she enrolled at MS University.

“When you travel a lot and see a lot of places up close, you start to notice a disconnect between how we perceive these places and how they actually are. I started studying more about it, trying to understand the connectivity in different ecosystems, in people and their connections with nature,” Sneha tells HerStory.

In 2019, Sneha began working on the Plastic Tide Turner campaign, for which the university and the Centre for Environment Education provided support.

“About 200 college students applied, with 90 from the Department of Environmental Science joining and assisting in conducting surveys about plastic, and understanding stakeholder relationships. We interviewed many police officers, local authorities, shopkeepers, and surveyed a large number of people to determine whether they understand what single-use plastics is, what their perception of plastic is, and to explain to them that plastic should not end up in the open environment,” she says.

While a blanket ban is not completely feasible, as it creates a lot of livelihoods, Sneha believes we must approach it in a way that does not end up in an open environment.

While working on the Tide Turner Campaign, Sneha and her team came across an urban stream named Bhukhi, 7.5 kilometres long and linked to the river Vishwamitri. Initially, they thought it was a nala (drain) but on mapping, it turned out that it is a natural rivulet, which was not even marked by the municipality because smaller systems like these often go neglected because they have no use of them.

She explains, “But they're very crucial for managing floods, for managing urban biodiversity. On looking into a deeper aspect of Bhukhi stream, we found that it had been clogged with plastics and solid waste to an extent that there was no movement of animals, specifically crocodiles.”

Sneha and 10 of her juniors from MS University, all worked on this as a dissertation - one with soil, other with water, another with waste and so on, and collected data. They realised that collecting and publishing data was not going to work so why not incorporate a human aspect – by raising awareness.

“It started with an awareness programme. Slowly, it went into a little bit of engineering to show people that there was a lot of erosion in the river, a lot of waste which was removed and so we can have a lot of native plantations on the bank to make it stronger, which also helped them understand what are the native species which can be planted to bring more butterflies and birds,” she adds.

Soon, they had 300 volunteers from the university with everyone helping to clean all the waste.

“We got somewhere around four to five hours of clean-up time, because it was a risky place because of crocodiles. We removed around 700 kgs of plastic which was segregated and some of it was recycled by using alcohol and moulding it. The rest of it, which was either medical waste or glass and chemical waste was all sent through tractors to the landfill sites,” she says.

At the end of it, the crocodiles that they saw only once a year during the rains due to higher water levels, began to appear on a regular basis, and the team continues to monitor them.

The goal was to make more people realise that they, too, can go into their backyards and look for small problems to start with. It was about raising awareness about freshwater bodies and how they can be restored by restoring people's faith in them.

Sneha is part of YRE - Young Reporters for the Environment, and conducts workshops on plastic use to school and college students.

“In my own house, in the organisations that I work with, I've tried to implement the segregation system for plastics for organic and inorganic waste, so that there is a three-part segregation of waste. Other than that, I've always tried and spoken about plastic at any platform that I've been given, be it UN, be it UNICEF, because I understand the perils of waste ending up into it and waste ending up in environments,” she says.

“The best advice I can give young people is to channel their empathy and their passion into working towards a greater cause. The planet is dying and there are solutions, but there is no implementation. So, if people can work towards implementation, that would be wonderful,” she says.

Sneha’s work has been featured in National Geographic’s One for Change campaign, that focusses on stories of changemakers in the environment space.

“My long-term plan is that I’ll be studying the system with the lens of social and ecological aspects, trying to link water quality with stories of people and how they feel the water quality has changed over the years, how people interact with this river and based on this water quality, what is the kind of diversity available,” she concludes.