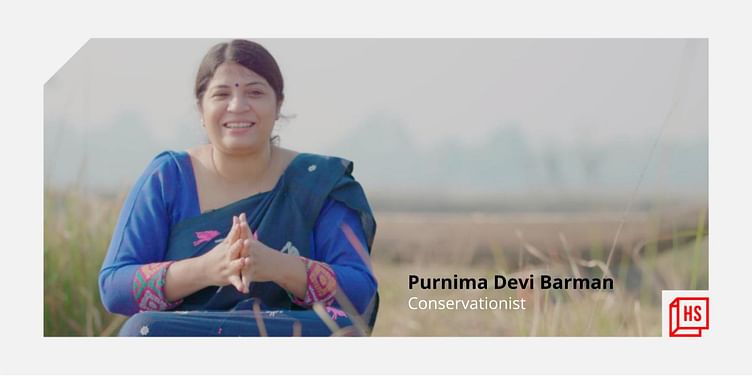 Biologist Purnima Devi Barman has rallied a Hargila Army of over 10,000 women in rural Assam to save the greater adjutant stork (Hargila) from extinction. It’s a mass movement that has also empowered the women to become leaders and conservationists.

In 2007, when Purnima Devi Barman embarked on her PhD on the greater adjutant stork, little did she know that she would soon spark a mass movement. One that would not just save the bird from extinction, but rally thousands of women to form an Hargila Army of conservationists, change mindsets, and provide livelihoods.

Fifteen years ago, Purnima received a distress call from Dadara village in Kamrup district, Assam. She rushed to find men felling a huge kadamba tree. It was hosting storks’ nests and she managed to save nine stork chicks that had fallen on the ground.

“It was then I realised that there was no point in research if I didn’t know how to be a conservationist. When I saw the baby birds on the ground, it affected me deeply. I was mother to two-and-a-half-year-old twins and I could relate to the mother’s despair,” she tells HerStory.

However, the villagers mocked her when she explained the importance of the bird, and the breeding season. All along, the villagers thought of the great adjutant stork (or Hargila, as it’s called in the local language) as a bad omen, and a bird that stinks and dirties the surroundings.

The greater adjutant stork, present only in India and Cambodia, is limited to a few pockets in Assam and Bihar. A huge bird, standing tall at 145-150 cm, it is a scavenger, and therefore reviled and considered as ‘filthy’ in the villages.

An endangered species, it’s estimated that there are only 1,200 birds in the world.

Purnima knew that changing mindsets was the only way forward to save the bird from extinction.

“I kept visiting the villagers. When they saw me, they made faces as if to imply that I too smelled like the birds since I was representing them. Undeterred, I went on with my mission. I kept on explaining to them that these birds were part of our culture, they clean our surroundings, and we must save them,” she says.

She went as far as equating the baby birds to her own children. She told them if her daughters made a mess, she’d be happy to clean them. She urged the villagers to look at the birds as their own.

This Earth Day, National Geographic to launch impact-driven campaign 'One for Change’

Purnima then decided to rope in the women and encourage them to join conservation meetings, but they too scoffed at the idea.

“Ownership building was important,” she explains. “I started organising cooking festivals, competitions, encouraging them to join where I would explain why saving the bird was important.

When she visited a villager’s house and saw his pregnant wife at a baby shower, she struck upon another idea.

“I told the women if pregnant women were getting respect, so should the Hargilas, instead of throwing their babies away. I started inviting them to Hargila baby showers in the temple, the prayer hall and other places and converted it into an awareness campaign with folk and prayer songs celebrating the Hargila,” she says.

Slowly, the women began to come around. Purnima procured looms for the women weavers who went on to produce beautiful fabrics with Hargila motifs that are now sold worldwide.

A small band of women became the centre of a mass social movement and a Hargila Army that now has more than 10,000 women in its fold, all active conservationists, empowered to make a difference.

Purnima cannot stop the tears from flowing as she explains the impact the Hargila Army has made in the districts of Dadara, Pacharia, and Singimari in Assam. “Every day, I celebrate the Hargila army. When I started my movement from scratch, I only had my love for the bird and determination. Now, it’s a social movement where homemakers have become conservationists. They are leaders who are also roping in their families for the cause.”

The biologist and conservationist has come so far, despite the barriers in her path.

“People looked upon women conservationists. My work was also exacting and physical, with a lot of challenges. But it was important to educate rural women to become leaders and claim ownership of the cause. Only then, things will change for the better,” she says.

While the greater adjutant stork remains an endangered species, its numbers are increasing. From 27 nests, there are now 250 and the Hargila Army and villagers are ensuring its protection to enable further breeding.

Purnima has been recognised for her work with the Nari Shakti Puraskar in 2017 and the Whitley award, from the UK.

Purnima’s life and work is part of National Geographic ‘Change for One’ campaign launched on Earth Day. “It’s an honour not just for me, but for the Hargila bird, our Army, and my community, and it will hopefully inspire other people to become conservationists,” she says.

She also believes community conservation is a never-ending process.

“I want to continue my works and I am committed to the cause until my last breath. In the next step, I want the Hargila Army conservation model to be replicated in other places, with other species of storks and birds,” she signs off.