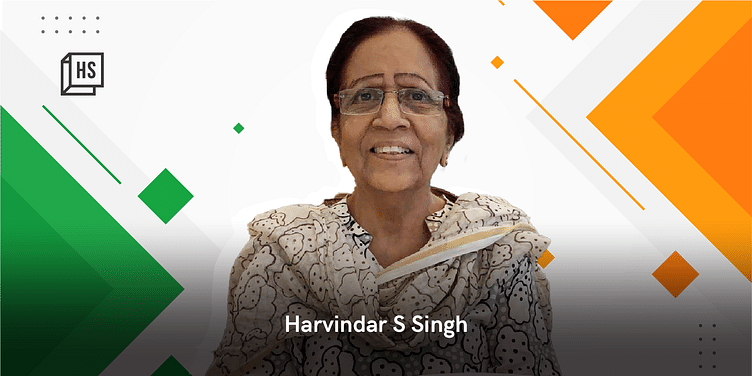 Harvindar S Singh was just seven years old in 1947, but says she still clearly remembers some of the incidents following partition and its aftermath.

Seventy-five years after India gained independence, the horrors of the 1947 partition where millions of lives were lost, and families displaced can never be forgotten.

For those who were witness to one of the bloodiest events in history marked by riots and bloodshed, and a nation torn asunder, the memories are still fresh.

Eighty-two-year-old Harvindar S Singh was just seven years old in 1947, but says she still clearly remembers some of the incidents following partition and its aftermath.

Over a phone call from Singapore, where she is visiting her son, Harvindar recalls, at great length the “suddenness” of the situation and starting life as a refugee in Delhi.

Here, she recounts in her own words what happened along with what she heard from her family members over time.

“My father, grandfather and uncle were landlords in Gujar Khan in Rawalpindi (Pakistan) district and were treated like royalty. We lacked nothing, owned huge properties, and had a good life. We owned oil and saw mills and my father was also a practicing advocate.

“As was the practice every year, we were visiting Srinagar during summer when partition was suddenly announced. We were happy that India had won independence from the British, but we were taken aback by this announcement.

“We received a telegram from one of my father’s juniors not to return to Gujar Khan as my family’s name was at the top of the list of people to be killed. We stayed put in Srinagar for a few more months. One day, there was an announcement that people had entered Baramullah, and we must leave the city immediately.

“Everyone left in whatever mode of transport they could find. We left in the middle of the night with whatever we had by car to Jammu. By then, we knew we could never go back to Gujar Khan, we had lost everything.

“I vividly remember crying for my doll I had left behind in Srinagar. I was told later that many people were massacred; one of my mum’s aunts was also shot dead in Gujar Khan.

This Independence Day, a look at what freedom means to startups (and other top stories)

Life as a refugee in Delhi

“From Jammu, we arrived by special aircraft in Delhi. I still remember the announcement that the aircraft was waiting for a family from Gujar Khan. In Delhi, we had no clue where to go–the only place we knew was Karol Bagh and it was huge. We were in a car when we saw our father in an open car and yelled out to him. We were reunited. He had taken a flight after us, but we had no clue when he had arrived in Delhi.

“We arrived in Delhi with just a few of our belongings. We stayed with our uncle’s in-laws’ initially. I was told that everyone was worried about how our grandfather could take it all – he was used to having a retinue of servants.

“One day, my father and grandfather went to a meeting where Gandhiji and Nehru were present. They asked my father why he was here, and knowing of our situation, allotted us a house in Prithviraj Road. We stayed there for some time, but it was a matter of pride for my family, and we moved out and my family was allotted tents in Harding Bridge.

“In due course of time, my father, grandfather, and an uncle set up an oil mill and saw mill in Gurugram. I believe the jewellery of my mother and grandmother may have been used for this purpose. Since my father was an advocate, he started his practice as well.

“When I was much older, I remember our oil mill caught fire and everything was lost. The locals did not take too kindly to refugees doing well. They even cut the water connected to the tanker that had come to douse the fire.

“I completed my studies with a BEd from Hissar and an MA from Hoshiarpur.

“I don’t know what to say if you ask me if things would have different if partition had not happened. But I can say this – Nehru could have done a better job handling the situation.

“One of the memories from that time that will forever stay with me is a boy dressed up in so many clothes. Perhaps his parents thought if he were displaced, he would have at least clothes to wear.

“Today, everyone is a politician. There are no special criteria to become one.

“Would I like to go to Gujar Khan? Why would I? There’s nothing left there,” she signs off.

Thanks to Roshni Mukherjee students now have no ExamFear