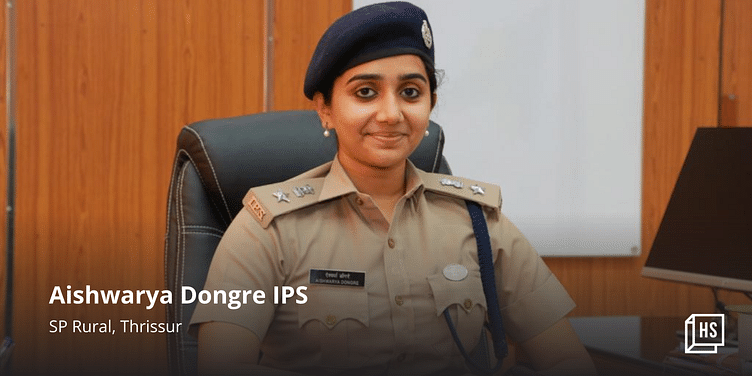 IPS officer Aishwarya Dongre is well-known for supervising the airlift of a live heart from Thiruvananthapuram to Kochi. Now Superintendent of Police, Thrissur Rural, she is fighting drug trafficking and introducing initiatives for the safety of women and children.

It’s close to 5 pm, and the office of the Superintendent of Police, Thrissur Rural, is buzzing with activity. Aishwarya Dongre has stepped out for a rather late lunch and is apologetic when she arrives half an hour late for this interview.

Aishwarya's day starts at 7 am and ends late, and a quick lunch is sometimes her only break from work. Her assistant Sangeetha mills around for a few minutes, alerting her to the tasks on hand, and Aishwarya replies in fluent Malayalam.

“You need to learn to speak and understand the language if you want to connect with the people. A lot of things can get lost in translation,” she explains, possibly sensing my surprise.

It’s been five years since Aishwarya had passed the UPSC exams in her first attempt, with an all-India rank of 196, and joined the Kerala cadre of the Indian Police Service (IPS).

Born and raised in Mumbai, she pursued a double major in economics and political science from St Xavier’s College and took a year off to prepare for the UPSC exams. She was just 22 when she joined the services.

In a short span of time, Aishwarya has been in the spotlight quite a few times. She supervised the transport of a live heart from a brain-dead patient in Thiruvananthapuram for a transplant in Kochi in just 35 minutes. She also oversaw relief operations during the pandemic. Today, 27-year-old Aishwarya is at the forefront of various safety initiatives for women and children and cyber-bullying operations, apart from maintaining law and order and undertaking drug busts.

Her decision to join the IPS was prompted by a desire for change.

“I’ve always wanted to be part of the development and growth process and administration. I think no other job would essentially give this kind of exposure where, if you want to see the change, you have to be the change. It keeps you close to the grassroots—you are continuously able to understand the day-to-day administrative, development, and security-related issues and find solutions people can relate to,” she says.

Her first independent posting was as Assistant Commissioner of Police (ACP), Shankumugham, in Thiruvananthapuram in 2019. Then, a few months later, COVID struck. She recollects the entire experience as being thrown in deep water and learning to swim but not alone. “You are helping others by preventing them from drowning,” says the IPS officer.

As the airport also came under her jurisdiction, Aishwarya was working from 6 am until midnight, overseeing the operations of Vande Bharat flights bringing in Indians from different countries.

“In the initial phases, we had a lot of people coming in, with old people and pregnant women being accorded top priority. To be able to connect with them and make them understand the seriousness of the situation was a great opportunity to see how, in the most adverse situations, different district machineries work together,” she notes.

It was also an unprecedented situation with no rule book or laws to fall back on. Aishwarya also describes the area (Shankumugham) as communally and politically sensitive, where people had a lot of apprehensions and came out on the streets.

But her experience with the people prior to COVID helped her navigate tough situations. She would often spend time with the religious heads of communities in the area; hence she was a familiar face.

She elaborates, “So, even when they came out in large numbers, they had trust in me, and untoward incidents were averted. During that time, guest workers (migrants) got agitated, and since I had previously connected with them and could communicate in Hindi, an angry mob stopped to listen to me. We had the option of using force, but it was important to understand the cause of their agitation.”

Towards the end of her posting in Shankumugham, Aishwarya was involved in the famous airlift of a live heart from Thiruvananthapuram to Kochi for a transplant.

Recollecting the challenging situation, she says, “I was the ACP in charge of the airport and had to ensure the route from the hospital to the airport was made a green corridor so that the ambulance got free movement. We had to coordinate with the medical team; we had a Kerala police helicopter that helped us transport the heart in just 35 minutes. To be very honest, I had no idea whose heart it was, because I believe it does not matter who you are doing this for or why you are doing it as long as you know that you are doing your duty.”

After one-and-a-half years in Thiruvananthapuram, Aishwarya was posted as Deputy Commissioner of Police, Law & Order, Crimes, Traffic, Kochi, where her responsibilities ranged from “extremely core urban policing to coastal policing and a lot of aspects of cybersecurity and petitions related to women”.

“We had the Sanu Mohan case—an example of sheer brilliance in team investigation, because the effort put in by some of the junior officials was amazing. That’s when you realise the more you learn from experienced people, it becomes a better version of policing,” she says.

Aishwarya moved to Thrissur as SP Rural in January this year. She says it has been an eventful eight months, fighting against drug trafficking. It has been a focused and ongoing effort, and the team has confiscated more than a thousand kilogrammes of drugs.

“Our fight against drugs has been extremely crucial. Also, we want to ensure that any person in trouble should have access to the police in a very easy manner. And that does not include always going to the police station. I think the Kerala state police as a whole is very dedicated. For example, we have started SOS buttons like Nirbhaya to aid this. We have also integrated all police services into a single mobile application—the Pol app,” she explains.

Understanding gender from an open lens

Aishwarya emphasises that gender sensitisation is at the heart of what they do.

“Since time immemorial, we have had crimes against gender, now there are crimes against transgenders as well. So, understanding gender from a very open lens is crucial. A lot of people believe that whenever you speak of women’s safety and security, you should only have women police personnel as the face of it. I think that’s a huge problem because police respond the same to any kind of issue."

She also notes that crimes against children are on the rise, most of it perpetrated by family members. Initiatives such as the Child Welfare Commission, an active childline, and monthly meetings with stakeholders in this space have helped in quicker action.

Aishwarya says it’s laudable that children are speaking up and this is happening because the education department, along with the police, is organising various awareness campaigns and counselling in schools.

In Thrissur, there are school protection groups in 350 schools, wherein a police liaison officer keeps in touch with the school authorities to identify cases of abuse and create awareness.

To tackle cyber bullying, cyber security clubs have been formed in schools, wherein student representatives have sessions with the cyber cell. In Kochi, Aishwarya has created a Cyber Simulation Room, a digital forest where one can understand all aspects of cybercrime through an animated video game.

The police officer believes policing today has gone beyond the usual tags of aggression and masculine terms associated with it.

“Today, I see a lot of women want to get into service because you require a balanced angle to any issue. As part of Kerala Police’s Janamaithri project, I visited a number of tribal hamlets, and when they see a woman police officer, it brings in a sense of warmth, they want to speak with you. There were a lot of girls who wanted to share their experiences with me, which they couldn’t with anybody else. I think it’s because people associate women with empathy and compassion.”