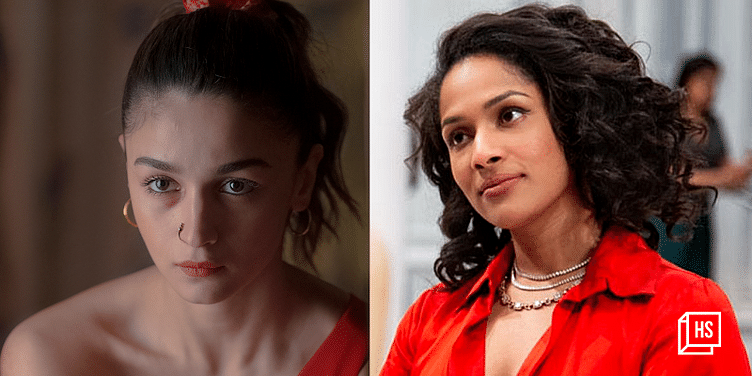 Masaba Masaba and Darlings, which dropped on Netflix recently, portray contrasting characters, but the struggles and choices of Masaba and Badru are real.

This is about a film and a show, and the choices women make.

Season 2 of Masaba Masaba, a fictional take on fashion designer Masaba Gupta and her actor-mother Neena Gupta’s lives, and Darlings, a dark comedy on domestic abuse, dropped on Netflix recently.

And, they are as different as chalk and cheese.

In Darlings, Alia Bhatt’s character, Badrunissa (Badru) has a love marriage after which a long cycle of abuse begins. We see her cowering in fear, trying to cover her bruises, and telling herself that her husband Hamza only has these fits of rage and all will be well.

His anger is only directed at her – be it for the kankar in the food or every other little thing that irks him – only to hug her in the morning as she makes him the omelette he likes while hoping he does not try to strangle her. Again.

Despite her mother Shamsunissa’s (Shefali Shah) pleadings, Badru’s belief that her husband behaves the way he does because of alcohol is unflinching. Until a “last straw” leads her to retribution. Where enough is enough. Anger replaces the tears. There is a choice to make – if she has to live.

And, through the “darlings”, “good lucks”, “loves” in a strange mish-mash of the English language that both endears and suffocates, Badru triumphs. A victory that that we had been expecting and are happy to revel in.

Badru suffers, as she sometimes thinks is her want, but she is not helpless when she decides to finally do something about it. She has an unlikely ally in her mother who even urges her “to mix rat poison in his food” and asks her repeatedly to come home. It’s different from the usual Bollywood trope – where the victim is celebrated with a proverbial ‘good-over-evil’ storyline.

The new season of Masaba is far removed from the social milieu and the lower-middle class Mumbai neighbourhood Badru lives in.

Masaba is a hot-shot designer with her own label, most probably living in uptown South Mumbai. She’s privileged, but is still looking for validation in other ways. Putting a failed marriage behind her, Masaba must now move forward – she is at an age where people are still judging her for putting her career first.

Now, she has to also deal with a “dumb” influencer who seems to steal the show, literally, every time, until Masaba herself turns badass at a reality show to protect her reputation.

Our Masaba is real – selfish, stupid, vulnerable, and breaks all stereotypes when she talks of freezing her eggs, or wanting to go through IVF. No, she does not talk of adoption as an option, as a section of viewers, rightly point out – it’s again her choice about what’s right for her.

Peel off layers from the character, and you’ll realise that all of us have been there at some point – privileged or otherwise, because of the choices we have made. And it’s this vulnerability that is almost disarming – as she and her friend Gia unapologetically talk of PQ – or the pussy quiver – when they talk of love at first sight or when Masaba hears of Wendell (Roderick’s) passing.

On the other hand, Neenaji gets back on screen with her old flame, who is eager to please despite being married. Neena, even if her husband has not much of a role to play in the show, sticks to monogamy. Fidelity is her choice, and she too seems to be unapologetic about it.

The others on the show – whether it’s Gia, who is going clearly going through a bout of depression, or Masaba’s new PR consultant (Kusha Kapila in a no-nonsense role) – are strong, independent women living life on their own terms. They are proud of who they are – insecurities, warts, and all!

There are no striking similarities between Badru and Masaba. But they are both women with different vulnerabilities and strengths that show the path they must take. And the choices they must make.