During the pandemic, we learned how Samaaj, Sarkaar and Bazaar work together in a crisis: Rohini Nilekani 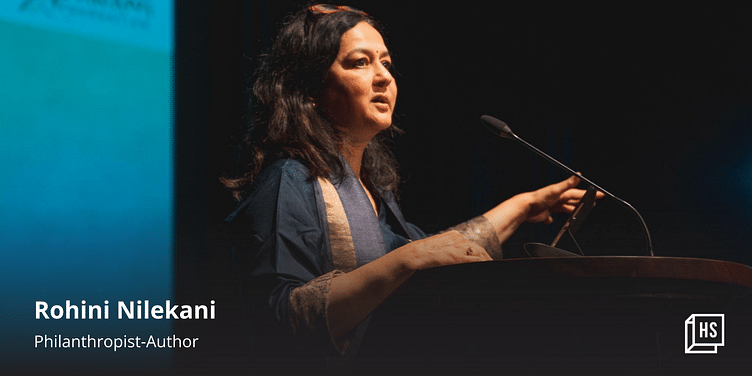 Samaaj, Sarkaar, Bazaar – A Citizen-First Approach is a collection of over a decade of articles, interviews, and speeches by philanthropist author Rohini Nilekani. Here, she talks of strategic philanthropy, volunteerism, clickvitism, and partnerships with government agencies.

She started with Nagarik, a public charitable trust, in 1992 and is now the Chairperson of Rohini Nilekani Philanthropies and Director of EkStep, a non-profit education platform. She is the Co-founder and Former Chairperson of Arghyam, a foundation she set up in 2001 for sustainable water and sanitation, and which funds initiatives across India.

From 2004 to 2014, she was Founder-Chairperson and chief funder of Pratham Books, a non-profit children’s publisher. She sits on the Board of Trustees of Atree, an environmental think-tank.

In an interview with HerStory, Rohini talks of her new book, Samaaj, Sarkaar, Bazaar – A Citizen-First Approach, a collection of essays where she outlines her philosophy of restoring the balance between the state and the markets, by keeping society as the fundamental sector.

HerStory (HS): What prompted you to compile this collection of essays? In the introduction to the book, you say you want to take it forward as a hub for thinkers, writers, activists, students and researchers.

Rohini Nilekani (RN): I have been talking about Samaaj (society), Sarkaar (government), and Bazaar (market) for several years in different places and so it made sense to finally put out the theory concisely.

I thought I should put the whole collection out as an invitation to further public discourse on Sarkaar, Samaj, and Bazaar because enough has been written about the first two, but not about where the role and responsibility of the Samaaj begins and ends.

Even though we know Samaaj is not a monolith, we are hoping that people in their own way will take this conversation forward.

HS: In one of your essays, you point out that charity and strategic philanthropy can play a critical role in mitigating some inequity. Can you throw more light on this?

RN: I have always maintained that philanthropy is necessitated by the inequal distribution of wealth. Having said that, the responsibility of that wealth is towards society, eventually.

More and more people have started to engage in what is now called strategic philanthropy, which is deliberately differentiated from charity - of humans continuing to do something for other humans in distress.

Strategic philanthropy tries to get to the root of a problem and see if it can be attached to a new practice or policy to make effective change. So, more patient resources can be put in and higher capital can be dispensed, so that real change can be mapped over time.

I think, in some senses, philanthropy, in addition to what the state and civil society did, has been responsible a lot of good things that have happened in education in India. We are beginning to see more investment in healthcare, which will definitely have an impact over time.

Our team has started to talk about what we call societal thinking, an approach to look at very complex problems, and see how Samaaj, Sarkaar and Bazaar can work together.

HS: How challenging is it to maintain the continuum between Samaaj, Sarkaar and Bazaar when, for example, an unexpected pandemic happens?

RN: I think the first responders during the pandemic were ordinary citizens and the civil society – neighbours helping neighbours. Kindness to strangers was at its zenith all over the world.

We saw the state also moving quite rapidly, though sometimes making some mistakes. But overall, I think India did well.

And, a reason is that we already had some public digital infrastructure in place. For instance, once the vaccines were available, the state was able to roll it out quickly in a relatively unchaotic manner compared to what happened elsewhere.

The civil society was able to play its humanitarian role, work closely with the Sarkaar. As far as the Bazaar was concerned, we were lucky that The Serum Institute and Bharat Biotech played major roles, and the Bazaar actually delivered the innovation. Of course, there was death and despair, and I don't want to downplay that at all.

But we've really learned a lot from what the three sectors can do together in a crisis. Now the challenge before us is to prepare even better during times of non-crisis. So that next time around, we can be even more effective and rapidly deploy the humanitarian agency of Samaaj, the regulatory and financial capital of the Sarkaar, and the innovative agency of the Bazaar.

HS: You also dwell on the role of volunteerism as the bedrock of society. How can one attract people, especially the young to become volunteers in civil society?

RN: I think India has a very long history of volunteerism and the Gandhian movements espouse it the best in some way.

Also, humans are hardcoded to be empathetic to people in distress. There's a lot of invisible voluntary action in India. The question is can we galvanise more people?

I think one of the focus areas in our philanthropy is how do you seek out ethical leadership, especially young leaders, who are trying to rally around the volunteer energy of other young people and we are seeing it in droves. We are supporting so many organisations that bring in volunteers, across so many areas, whether it is better service delivery for the vulnerable, solving of hyperlocal problems with water, roads, shelter, or even street lighting or waste management.

Volunteer energy is well and thriving in India, the young are naturally idealistic, and if we can harness that energy better, it adds positive meaning to their lives.

HS: On the other hand, you also talk about clicktivism being a easy replacement for easy true action in the digital age.

RN: This is a real challenge, which is why you need both offline and online civil society. It can't be only offline. So the idea of online activism in the digital age needs to change. Right now, it’s easy to say something, just click, and say I agree, or I support this or that, and feel good about yourself. It’s not a bad thing because it makes you at least look through some issue you didn't know about, where you learnt a little bit, but the question is how do you take it forward.

The argument I make is that in India, civil society is beginning to, but needs to more rapidly come into the digital age so that online volunteering, or activism, or “actionism” - actually doing something to make a change for the better - doesn't simply rest with clicktivism.

Many processes and pathways can be created for online citizens to gather together offline and online to take an issue forward towards a resolution point.

HS: Forging relationships and collaborations with government agencies is important. In your 30-year journey in civic engagement, what challenges have you faced?

RN: The challenges are many, because social change is incredibly hard.

No matter what you do, sometimes even people solutions lead to the next problems. So, there's no one endpoint where you can put on your cap and think it’s done and solved; it never happens that way. Secondly, problems are so complex, they grow exponentially. For the response to keep up with the scale and scope of the problem is hugely difficult.

Thirdly, there is a lot of friction to collaborate and a lack of trust between all agents. I have learned that government in India at all three levels, local, state, and union, is very open to collaboration with civil society and philanthropy.

The intent has to be very clear that civil society partners do not have any other agenda except public good. Once that is established, the government in all its three layers is willing to experiment and innovate together with civil society.

Sometimes, there's failure, which is why the risk has to be borne by philanthropy capital, but the partnership possibilities are there.

HS: What more can be done to empower women self-help groups and, in the process, rally men as allies?

RN: When I was working in Sanghamitra Trust as a board member, that men didn’t like to be put into groups, but I think we need to test that with some innovation. There are about 80 million women in self-help groups around the country, I think, in a positive way, the need for that social collateral has reduced because of DBTs (direct debit transfer), and new infrastructure for individual credit.

Many women are part of these SHGs to access credit, which is good because India’s sophisticated public digital infrastructure has allowed lots of innovation in financial services. That doesn't mean that the process of empowerment is finished and more needs to be done to imagine new forms of collective action and collective membership along with innovation.

HS: These lines from your essay strikes a chord, “Families need to understand that women need to use their talents, not only in their jobs and home life, but also work to improve their community.” Can you list a few ways by which women, in their spare time, take part in civic engagement?

RN: My community in Koramangala (Bengaluru) has one of the most active Resident Welfare Associations, where many causes are taken up by women, whether it is segregation of waste, managing our parks, whether it is fighting even up to the High Courts for restoring the commons near the lake.

Bringing communities to work together is truly a rewarding experience that many women enjoy. Sometimes, I have found that women find it hard to participate in family philanthropy because they feel that they have not directly earned the money. Even if it is just the husband who has earned the money, we all know how much the woman would have supported him. So, I think women need to get bolder in doing family philanthropy and feel more empowered to do it.

(The copy has been updated to remove a repetition of words.)