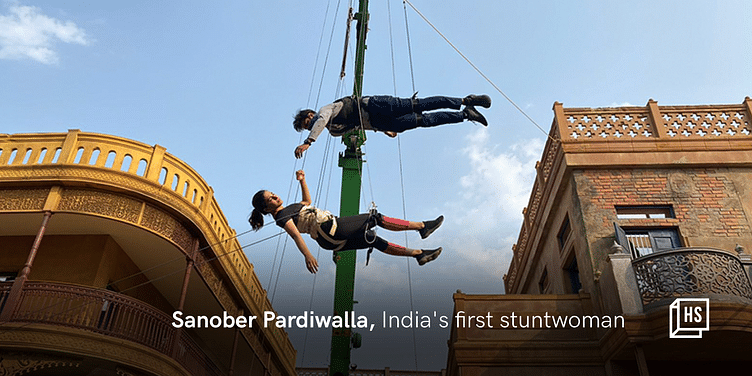 Sanober Pardiwalla has been working as a stunt double in Bollywood since she was 12 years old. She has been a part of more than 145 movies, performing stunts in air, under water, on ground, and more.

In 2009, when Sanober Pardiwalla was shooting for the Mani Ratnam multi-lingual Raavan, she had to jump off a 300-feet cliff near the Athirapally Waterfalls in Kerala.

The scene being picturised showed the heroine trying to die by suicide by jumping off a cliff, but she ultimately survives after falling through rocks, trees, and branches and finally landing in the river.

As a stunt artiste, Sanober did as required but Mani Ratnam told her she needed to do a retake because her fall was “perfect”.

“Mani sir told me that this was a tribal woman, and not athletic at all. Her [idea] is to end her life and she only survives because of destiny. He said my fall was a little too ‘professional’,” she recalls with amusement.

“He asked me not to bother about my costume, my hair, or anything else. My fall needed to have a body language of its own, and still show me survive. This stunt got me a nomination for the Taurus World Stunt Award,” Sanober says.

In another instance, while shooting for the same film, this time for a drop of 150 feet, one of the safety cables broke and Sanober was suspended at about 75 feet, next to a waterfall, with no way to go up or down.

Keeping calm and carrying on

In such unpredictable circumstances, Sanober reiterates the importance of keeping calm.

“It took almost 30 minutes to fix the cable. I knew I could do nothing but wait. Even if I screamed at the top of my voice, it would be drowned by the sounds of the waterfall. All I could do was focus on shallow breathing, enjoy the sight of the waterfall, and go into a meditative state, knowing that whatever the issue was, they would fix it soon,” she says.

By the age of 12, she had already earned a black belt in karate. When an ad shoot for Nakshatra Diamonds came calling, she performed some somersaults and gymnastic moves as a double for Aishwarya Rai and realised she was good at it.

She may have been young in age, but she made up for it by being a committed martial artist and tapped the advantages that came from being one.

“I was already heavily into martial arts, winning at the national level. When you are in a fight, you understand it’s not about the bout – you plan, strategise, know the pros and cons of each move, and learn to calculate everything within a fraction of a second. You don't have time on ground to think. Why do you think I am a very good boxer, not just because I know to box, but because my brain can strategise, analyse, and understand the opposition's movement and react in that instant,” she says.

Sanober says these reflexes are developed at a tender age, and have held her in good stead through her journey as a double.

“I understood on the first day of my shoot that I was very good at performing stunts with accuracy, because I could understand what the director wanted. How to just tilt my face at that particular angle, so that the camera doesn't see the face, it just sees the hair. I had that level of understanding, I wouldn't call it maturity. But I had that level of understanding, which is what reflexes are built for,” she says.

Where her heart belongs

By the time Sanober finished school, she had already worked as a stunt double in 40 movies.

She recollects a few interesting experiences, including jumping off the 16th storey of a building when she was just 15 years old for the film Bhoot.

In Hero: The Love Story of a Spy, as a double for Preity Zinta, she was part of a “big bomb blast sequence that has people drifting in a river towards Pakistan”.

“The entire sequence showcased a lot of water and fire along with breaking glass. Shot in a glass house, there was a big stage that broke down with everyone just sliding into the water,” she says.

Recently, Sanober shot a tricky sequence for Shamshera, where she had to dive from at least 15 feet to show an underwater perspective.

“To film that, frame that, and to give the right lighting underwater, in a saree…and to go down 20 feet and swim a little was challenging. There was no oxygen or breathing apparatus. It takes a lot of breathing exercises and staying calm to execute it, because there are times when there are multiple takes, you are out of breath, and it’s terribly cold in the water,” she says.

Sanober agrees that there was no concept of “stuntwoman” a few years ago. She was quite used to hearing, ‘stuntman ko bulao’ (call the stuntman), only for her to correct them, ‘you can call me stuntwoman!’ The acceptance and understanding took a while to come.

The stuntwoman, who has worked with popular Bollywood actors, does not seem very bothered about whether her name appears in the credits of a film.

“Since the past five years, every person is being credited for the work they have done. But I don’t think it’s a big issue,” Sanober says.

Stunt doubles are part of the Movie Stunt Artists Association that provides them with medical insurance. Sanober says actor Akshay Kumar has been very supportive of this initiative, making sure payments are regularised and working conditions are favourable.

But if you ask her if the returns are good enough for the risk she’s taking, Sanober is pragmatic.

“No money is good for the amount of risk I take. It’s about what you want – for me, it’s purely about performance,” she believes.

“If you ask me where I see myself 10 years from now – it would be still on a film set, because this is what I am passionate about. I will be either choreographing stunts, or be a safety coordinator or a rescue diver because I am qualified for these. I don’t see myself doing anything else. This is where my heart belongs,” Sanober concludes.