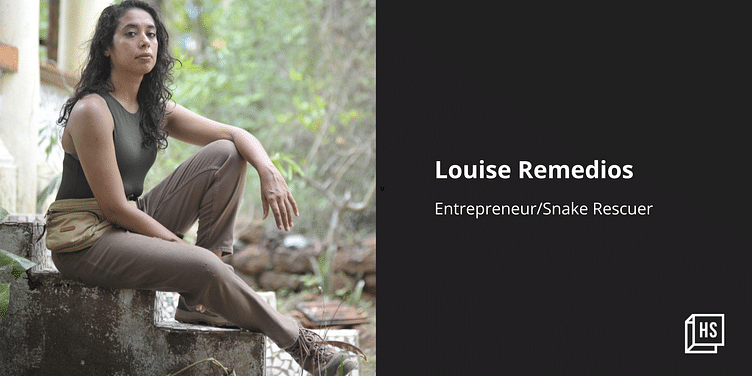 Wedding planners Louise Remedios and her husband Benhail Antao rescue snakes and other animals in Goa, and also educate people on the need for wildlife conservation. Their adventures are featured on Snakes SOS: Goa’s Wildest on National Geographic.

Call it serendipity or destiny, but Louise Remedios never in her wildest dreams thought she would meet her future husband, Benhail Antao, at a workshop on snakes.

Little did they know that many years later, their adventures with wildlife, including snakes, would be featured in two seasons of Snakes SOS: Goa’s Wildest on the National Geographic Channel.

It all began in 2011 when Louise was working at a five-star hotel in Goa. She decided to attend a presentation by Ben, a wildlife conservationist reputed in the state for rescuing snakes and other animals, and working closely with the forest department for wildlife preservation and conservation.

In a conversation with HerStory, she recalls, “I was sitting at the back and never thought he’d notice me but he did. I remember having a conversation in the elevator on wildlife and he spoke so passionately about his work. I had no romantic interest in him at the time but we added each other on social media, and were in touch for a good six months.”

Eventually, they got around to talking again. They went on their first date, and Louise got drawn into Ben’s work. It didn’t take much effort as she enjoyed wildlife and animals, and to be able to get them out of difficult situations and releasing them into the wild only added to the excitement.

Louise’s father ran a well-established event management company in Goa. Her father had been running it as a one-man show and in 2012 he asked Louise to take over the business.

“When I joined the company, I realised it was similar to what I had been doing in the hospitality industry. I was soon talking to clients for weddings, birthday parties, and corporate events. It gave me a holistic approach to the field of event management. I understood the importance of team dynamics and hired staff, and slowly built the business,” she says.

Initially, she was not sure if she would do five, 10 or 40 weddings, and decided to start small. That, she says, was a difficult pill for her father to follow – convincing him to let her fail.

“I told him, ‘let me try. If I fail, let me fail’. If I have to get up, let me do it on my own. The first meeting didn’t work, or the 10th meeting, but the 100th one did and soon I started gaining confidence and attracting celebrities to the agency,” she adds.

Soon, Ben also joined the business and helped in giving it a structure. With his engineering and analytical skills, he supervises the production aspects Louise deals with clients directly.

Louise admits that she was drawn heavily into the world of wildlife because Ben was part of it.

But she is quick to point out that it’s “also something I enjoy doing because you are able to give something to an animal that can never repay you”.

“It’s selfless because the animal doesn’t even know you are rescuing it. Its first instinct is to attack. After you rescue it, it cannot pay you back; that’s the motivating feeling.”

While the job is one fraught with many risks and dangers, and Louise has been bitten by non-venomous snakes many times, the past 10 years of working with Ben have been full of "memorable experiences".

“In one instance, there were seven snakes inside an air-conditioner –one female was attracting males as it was the mating season. In another incident, at Goa University, a bronze back was trapped in the sliding door. Ben was instructing on a video call on what to; I had to remove the screws and figure out how to get it out. It took around 45 minutes to rescue it. We decided to let it out into the university grounds itself where it belonged. In the sun, it had a bluish iridescence and the students were admiring the patterns. That’s a great way to form empathy when you can admire something,” she shares.

Most of the time, Ben takes the lead and Louise supports him by holding the bag or explaining to the crowd why it’s imperative to protect wildlife.

She explains it’s important to understand the way fear works.

“A human being is born with two kinds of fear – of loud sounds and fear of falling. All other fears – of snakes, dogs or cats - are induced when we watch others or if we have had a bad experience. So it’s very important to be aware that you can do more damage to the animal before it even touches you.”

Louise emphasises the need to realise that animals exist around us and we have to learn to live with them.

“We have to know the difference between fear and danger. Danger is when I am two metres away from it; if I’m 10 metres away, it’s fear. It’s a delicate ecosystem, and human beings create an imbalance when they try to control the environment,” she adds.

Ben and Louise’s adventures have made their way to Snakes SOS: Goa’s Wildest, now into its second season on National Geographic.

A dream come true for both, but having cameras trailing them on rescue missions have been a different experience.

“We had to battle conditions like the weather and move from house to house to bring the audience to where we were. The second season has a lot more than the first because we were used to it by now. There were certain rescues we thought would never end; they went on for weeks. You’ll have to watch to see what we are talking about,” Louise says.

The couple is looking at travelling to other places beyond Goa, because “there’s always something new to learn”.

“That way, you can teach others as well; we’d like to be known as educators first and rescuers later,” Louise concludes.

(The copy has been updated to correct a typo)