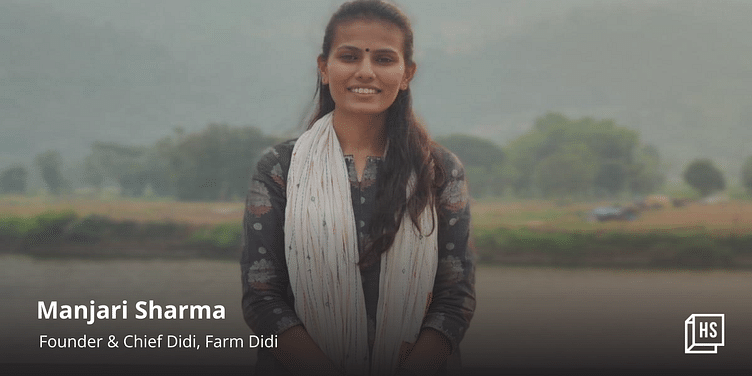 Manjari Sharma is the Founder of Farm Didi, a foodtech startup that aims to empower one million rural women. Just a year old, it has enabled 1,080+ women entrepreneurs through an initiative impacting 40+ villages in rural Maharashtra.

A line that resonated throughout Manjari Sharma’s travels through three districts of Bihar during her project while at IIM-Calcutta was ‘didi, hum aur kya kar sakte hai?’ (Sister, what more can we do?).

Five years later, this would be the impetus for establishing ﻿FarmDidi﻿, a tech-led food startup that is empowering women in rural Maharashtra to manufacture high-quality food products and make an income.

In 2016, as part of her IIM project, Manjari worked with the Bihar state government to understand the state of women’s empowerment.

She recalls, “I spent around a fortnight in the state, and for the first time saw the huge feminisation of agriculture in rural India. Men had moved to the cities for work, while women were driving the economy – be it agriculture, taking care of families, procuring potable water, working in the fields, or doing household chores. The amount of multi-tasking I saw was crazy.”

While on a tour of Begusarai, Khagaria, and Patna districts, she interacted and interviewed women from different villages – conducting surveys, focus groups, and discussions to understand women’s empowerment.

And here’s where she saw first-hand the power of self-help groups (SHGs).

Manjari was pleasantly surprised by the smooth functioning of the SHGs. “The meetings had a very strong agenda, the discussions were cut-to-cut with no waste of time. They were also taking actions based on these meetings whether it was a sanitation problem or how to utilise funds for different purposes.”

What more can we do?

She was happy to see this empowerment wherever she went, but it clearly wasn’t enough.

“Every woman I met was asking, ‘didi hum aur kya kar sakte hai?. They were asking me how they could work from home, and at that time, I didn’t have many answers. But I understood when a woman starts earning money, 90% is reinvested into the family for better health and education outcomes as compared to men,” she says.

After the project ended, Manjari joined a management consulting firm, travelling across the globe.

But the question remained with her.

During her time off, she travelled extensively and researched on the role of SHGs. She found that the Southern states were quite self-sufficient in that aspect but there still remained a huge potential in the Northern states for them to empower women.

Manjari witnessed the migrant crisis during the lockdown and this made her more inclined to start up, with a vision to empower one million women in rural India.

She felt food would be the area way to start up in, as 80% of rural women understand the food business – they are already in the agricultural value chain and armed with traditional knowledge and wisdom in this area.

And thus began Farm Didi in 2021 with a focus on 80 villages in rural Maharashtra. Having lived in Pune for five years, and understanding Marathi well, Manjari felt the state was a “neutral” place to start the venture.

Initially, she thought micro loans could help the women become entrepreneurs, but on closer study, she discovered that money alone would not make a business profitable.

“When I was interviewing women from SHGs in Kolhapur, Satara, Aurangabad, Pune, and Amravati, I found that while there was ecosystem support for finance, they utterly lacked expertise in marketing. Businesses failed because these women did not know about packaging, how to speak to the retailer, or where to sell,” Manjari explains.

She launched a pilot for an app called Didi Business, where women entrepreneurs could list their products and directly sell to the consumers, and onboarded around 100 SHGs. But she found gaps when it came to quality of products, understanding food safety and hygiene, or upgrading infrastructure.

On the demand side, she tried to arrange B2B buyers like Horeca players, but found that SHGs were not being paid on time, were being disrespected, and realised that many were only interested in getting products at the cheapest price, without caring much about quality.

Manjari soon started working on training the SHGs – with a kind of mini-MBA entrepreneurship programme that covered all food safety components and business aspects.

Enabling didis with the right processes

The Farm Didi process is simple. It begins by partnering with local NGOs who are already working with SHGs in the area, for example the Swades Foundation in Raigad. The NGO helps Farm Didi identify “ambitious” SHGs with a good background. Next, the women in these groups are trained and if their product is onboarded, they are also helped with recipes.

“We provide the raw material, and through our partner distributors or retailers, we designate a place for them. There’s a community kitchen where they make products. After the manufacturing, we have logistics partners who pick the products from the kitchens and deliver it to our warehouse in Pune. After final checking, they are packaged and sold directly to consumers or through ecommerce marketplaces like Amazon, Flipkart and soon via BigBasket too,” she elaborates.

The team also visits housing societies in Pune for product tasting, and frequents different exhibitions to market products made by the didis. It is also set to sign an MOU with the Maharashtra government to identify and work in clusters.

Farm Didi offers 20 SKUs that include pickles, papads, chutneys, and gift boxes. All products are preservative-free. The didis follow local recipes and methods of processing and preparation. For the festive season, they will engage in diya making and handicrafts.

Manjari is the Founder and Chief Didi, and works with a 16-member team. She is supported by Asmita Khobragade, her Co-founder and Technology Didi, who comes with over 15 years’ experience at IBM; Anukrit Johari, another IIMC Alum with experience in FMCG industry; and Kavya Panneer Selvam, an IIMC alumna who leads supply and quality.

Farm Didi has so far worked with 1,080 women, part of 108 SHGs in 40 villages. These are predominantly in Raigad and Aurangabad, and the startup will soon expand to Sholapur, Kolhapur, and Amravati.

Manjari talks fondly of Tanisha didi in Raigad, who has been able to send her children to school after she became an entrepreneur with Farm Didi. Kavita didi in Mahad was a widow and disrespected by her family, but is now considered an achiever. She has been able to buy assets and owns gold rings – something she could never do earlier.

Farm Didi is bootstrapped with a some funding from angel investors.

Manjari now plans to partner with banks so they can upgrade the kitchens to assure better quality.

“Twenty to 50% of money earned goes back to the SHGs. We have to keep a certain part of the profit for marketing. But I can assure you SHGs have seen a 3 to 4X increase in income after they started working with us. Some of them continue to sell their products in the local market and have become famous,” she adds.

“Our plan is to work with around 300 retailers in Pune and expand to Mumbai, Delhi, Calcutta, and Tier I cities, and ultimately impact one million people in rural India,” Manjari says.