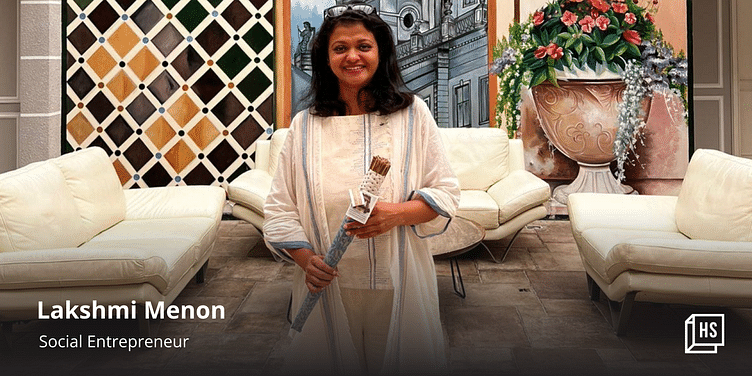 Choolala, a project by social entrepreneur Lakshmi Menon, is empowering a group of visually challenged women in Kerala to create artisanal brooms.

Many years ago, Kerala-based social entrepreneur Lakshmi Menon was on a visit to a government office in Bhopal when she noticed a man weaving cane onto a chair. The room was poorly lit and when she enquired why he wasn’t given better light to do his job, the others replied he was blind, and so it didn’t matter.

Last month, on the insistence of her friend, Rajalakshmi of Punyam, a charitable foundation, Lakshmi visited the Kerala Federation of the Blind Rehabilitation Centre for Women near Kothamangalam in Kochi.

“I saw women hunched over different chairs, weaving plastic cane onto them. It was a complicated weave, but the women were persevering despite not being able to see what they were doing. It would sometimes take a woman 2-3 minutes just to thread the plastic tape through a hole, but she kept at it. This brought tears to my eyes,” says Lakshmi.

The women would earn around Rs 950 for a chair, which included procuring the material, bringing it to the centre, and dropping it off at the client’s place. The centre was on the verge of shutting down as there was little work to sustain it and provide an income to the women working there.

Lakshmi says, at that moment she felt that life had come full circle.

This is where Lakshmi decided to step in with Project Choolala less than a month ago–a broom-making project to help these women get back on their feet with a steady income.

It all started when Lakshmi was on a holiday recently at the Sitaram Ayurvedic Retreat in Thrissur where she was surrounded by a coconut grove, and coconut fronds were available in plenty. With ample time on her hands, she took up a childhood pastime, making brooms from the fronds. A designer, she looked at a creative way in securing the broomsticks together with lace, with the sticks interwoven beautifully to make it an object of art.

“I researched online and found they were called artisanal brooms and selling at Rs 45o a piece. I thought if we could do this in a creative way, it would be helpful to these women,” she points out.

Livelihood for the visually challenged

Lakshmi is no stranger to social impact and is the brains behind the famous Chekutty dolls during the Kerala floods, Ammommathiri (wicks made by senior citizens) and many more projects that have changed the lives of thousands of people with innovation and out-of-the-box thinking.

This became the impetus for Choolala, an initiative that would provide livelihoods to these visually challenged women.

“I sent out messages in different groups asking, ola kittumo (where can I find coconut fronds?), my friends misconstrued it as Ola cabs and I explained what I wanted were coconut fronds; they were flabbergasted but rallied to send me information on where they would be available,” she chuckles.

Lakshmi provides the 20 women at the centre with fronds, and they make the brooms and create the covering.

“We use the basic nada (cotton strips) stretch it around a metal frame and interlace the broomsticks around it. We can also add embellishments to give it different looks. Initially, I was worried about the women using a knife, but in one hour, they made six brooms and surprised me,” she says.

She has employed three other women for the finish work, post which it’s wrapped around the broom. The broom is packaged in a Kerala fabric and includes leaflets on the concept. Here’s a brilliant take.

“It was always there as a silent witness in your life, it knows all your dirty secrets, still it helps you come out clean.”

And that’s what Choolala also means, it’s a take on ithu verum chool alla (it’s not just a simple broom!) and a twist of a popular film song that goes, ooh la la.

“Sometimes, I find the women singing, choo la la, choo la la as they are making the brooms,” says Lakshmi.

Each broom sells at Rs 499, with extra shipping charges. Initially, Lakshmi has tied up with The Culture Shop, an online platform to sell them, and also received a few bulk orders. She is also in talks with airport stores and other outlets to stock them so that people can buy or gift them as souvenirs. The Indian Institute of Interior Designers is also helping by promoting Choolala.

What touched Lakshmi the most is the happiness with which the women were doing their job.

“Once, I noticed they had skipped a few weaves and I was about to correct them but held myself and thought, ‘why should I’. So, if you see any irregularity appreciate it, it’s the signature of Choolala,” she notes.

What’s heart-breaking, the social entrepreneur says, is that the women cannot see the beauty they have created, even though they have done it with all their heart and soul.

“This project has made me appreciate the beauty of everything around me, and the gift of sight. I want to keep this project running and partner with whoever I can, to take Choolala to the world,” she concludes.

How these 5 women lost everything and still rose to success