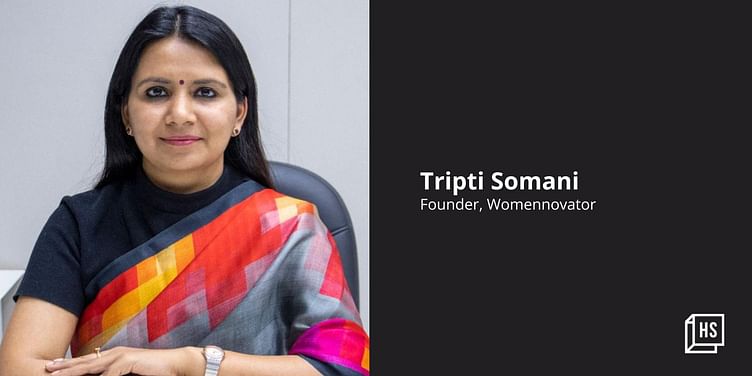 Tripti Singhal Somani is the founder of Womennovator, a women-centric platform and incubator that has formed a network of 10,000 women across 50+ cities in India and abroad. It has so far onboarded 150+ women incubates through five cohorts.

Tripti Singhal Somani believes women all over the world are restricted and unable to move forward because of the Golem Effect.

The Golem Effect is termed as a psychological phenomenon or a belief when lower expectations are placed on an individual by a superior or by the person themselves, which results in poor performance. It’s a negative self-fulfilling prophecy that impedes growth and development.

In 2017, when Tripti returned to her alma mater Shri Ram College of Commerce (SRCC) for an alumni meet, she announced an ambitious initiative to launch ‘100 Women Faces of SRCC’ and invited applications from women achievers.

“I received just 20 applications and realised there were few women making a mark in innovation and entrepreneurship after studying in one of the top colleges in Asia. This experience led me to launch Womennovator and change the concept to 100 Women Faces,” Tripti tells HerStory.

﻿Womennovator﻿ is now a global incubator for women supporting women entrepreneurs in scaling operations domestically and internationally and creating distribution networks, empowering women leaders and professionals to become directors or job creators, and women community leaders to be policy changemakers.

Tripti acknowledges the privileged background she comes from. Born and raised in Bareilly, she lived in a mansion where she had to “cycle from one part of the house to the other”, and moving to Delhi and SRCC was an awakening of sorts.

Navigating college life in a big city came with its learnings–living in the hostel and travelling hours to reach her aunt’s place in Gurugram to retaliating when groped in buses–all reality checks that taught her life lessons beyond privilege and comfort.

After completing her CA, Tripti worked with corporate houses like Grant Thornton and Price Waterhouse Coopers (PwC) before deciding to join her family’s CA firm, and currently oversees 200 employees, and is also on the board of top companies in the country.

While building ‘100 Women Faces’ and networking with women, she realised incubators worked more like training centres while the demand was for more.

“Women need information, mentorship, speaking to the right people at the right time, how to approach the media, work on a press release, the right time for investment, and getting packaging and costing sorted remained high on their list of concerns,” she explains.

Womennovator’s focus soon extended to incubation. In 2018, it entered the Asia Book of Records when they facilitated 100 women to pitch their products and services in 100 minutes.

“From a networking event-based organisation, we turned into an incubator, received crowdfunding, got mentors to explore investment, and one of our incubates even went to Australia to explore an export opportunity,” she says.

Interestingly, one would think funding would be on the top of the list for every woman entrepreneur, but Tripti says it’s otherwise.

“Women need working capital for delivering procurement, they want advice to creating a revenue stream on social strategy. Maybe out of 100, one woman would have asked me for funding,” she adds.

There are no membership fees to join Womennovator–Tripti’s only ask of the ‘100 Women Faces’ to get other women into the fold–to form a circle of giving and receiving. The platform has successful leaders and influencers who mentor other women and help in growing the community.

“Our work is to grow this community circle and help strategise on enabling this growth. The second is to help you at the revenue stage with your first loan/grant, and build you from the ground up.”

Her only requirement was that women give her and the mentors their time. The incubation process is manifold. It begins with an interview with the Womennovator team, followed by one with its partners, and takes 3-4 months for shortlisting and final onboarding. Incubation depends on the scale of the business or what stage it is at. The incubation runs for 10-14 weeks.

It’s a social initiative where Tripti puts in 90% of her time and effort and most of the money comes in the form of grants and CSR funds.

So far, Womennovator has created a network of 10,000 women across 50+ cities in India and internationally in Australia, Dubai, South Africa, and the US. The local chapters in each city are headed by curated influencers and mentors through whom the platform provides assistance. It has so far onboarded 150+ women incubates through five cohorts.

In 2021, it launched the Glimpse of 1000 Women of Asia Awards, and in 2020 was featured among the best seven VC incubators for women. It also features a WE-vendor development programme that helps women entrepreneurs secure orders from government agencies and corporate organisations.

Despite women-focused platforms like Womennovator, why is the number of women entrepreneurs in the country still abysmally low?

Tripti attributes it to self-doubt and the impostor syndrome plaguing most women.

She takes her own example. “I run my organisation with 200 employees and pitching for funds for Womennovator used to make me uncomfortable. But I thought, I need to do this to change the status quo. The problem with women is as soon as they are stretched a little, they begin asking questions like, ‘why do I need to do this?’ It’s the Golem Effect coming to play all the time,” she says.

Also, Tripti points out that a number of government organisations and banks have schemes that not many women are aware of.

“There have been times when banks have not been able to meet their targets of offering loans to women. Women do come to me for help in getting funds, but the moment I ask them for more information, they are unwilling to put in the extra work and disappear,” she says.

Currently, Womennovator is planning a Global Drive Yatra with a pitch competition in every location over a five-year period.

“I believe in collaboration and co-creation, and not working in silos,” Tripti concludes.

(This article has been updated to correct a typo)