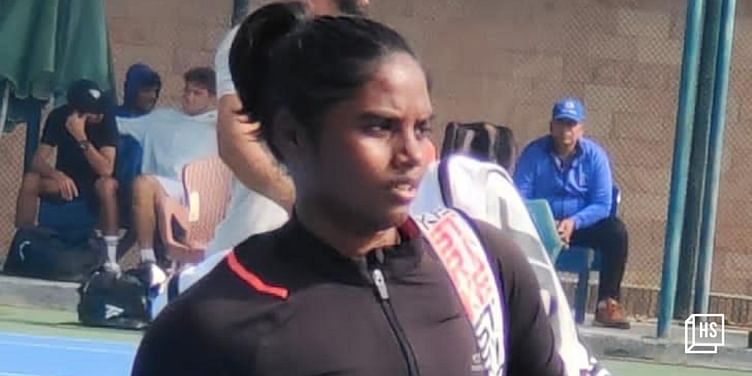 Starting her coaching at the Rafa Nadal Tennis Academy in Anantapur, which imparts tennis lessons to children from disadvantaged backgrounds, Thaniya Sarai has come a long way–she now has an ITF Junior Ranking of 1709 and is ranked No 1 in the U-14 category in Telangana state.

There’s a very famous quote by Serena Williams that goes–“You have to believe in yourself when no one else does.”

Fourteen-year-old Thaniya Sarai, daughter of an autorickshaw driver, has had a steep journey to the Indian under-14 girls’ tennis team and an ITF (International Tennis Federation) Junior Ranking of 1709 (as of January 2022), but these words of Serena, whom Thaniya regards as her role model, holds her in good stead.

“I will improve my game and strategy and play at least 16 ITF tournaments in a year. I want to be in the top 100 by the end of 2023,” says Thaniya, in a chat with HerStory via email. She is currently in Islamabad, Pakistan, where she most recently played for the ITF Pakistan Junior Tennis Championships I, 2022, J5 Girls.

Although she lost in the quarter-final round to Sri Lanka’s Saajida Razick, Thaniya, ranked No 1 in the U-14 category in Telangana state, is as determined as ever.

The ITF World Tennis Tour Juniors gives players aged 18 and under the opportunity to travel the world and develop their talent. Although it provides the best players with a launch pad to go on and achieve success in the professional game, it has not been easy for Thaniya to reach where she has, given her humble background.

Despite her struggles, earlier this year, Thaniya managed to climb to India's No 3 position in the Under-14 section and also made it to the Indian team along with Aishwarya Dayanand Jadhav and Sohini Sanjay Mohanty, and for this, Thaniya is grateful to her family’s support.

Thaniya’s father Samson belonged to Rajahmundry in Andhra Pradesh. When she was very young, he noticed that she had a talent for tennis, and he noticed this because Thaniya’s grandfather was a tennis player who played for Narsapur Lions Club in the Warangal district.

Little Thaniya first started playing tennis at the age of six at the Rafael Nadal Tennis Academy in Anantapur, a centre run by the Rafael Nadal Foundation, which imparts tennis lessons to children from disadvantaged backgrounds. “She joined the Nadal academy as that was the closest to our hometown,” says Samson.

In Hyderabad, Samson began to drive an autorickshaw to earn a living and managed to enrol Thaniya at Advantage Tennis Academy.

A year and a half later, he transferred her to the Sania Mirza Tennis Academy, where Thaniya was offered training free of cost. Since the training institute was on the outskirts of the city, and Samson could not make a living driving an auto there, he shifted his family to Manikonda in Hyderabad.

Currently, Thaniya is not affiliated with any particular academy and instead trains under different coaches.

“On an average, coaching at top academies along with physiotherapy, nutritionist advice, gym, etc, costs nearly Rs 1 lakh per month. I am trying to support Thaniya as much as possible with the income that I earn from driving an auto, but it is not always easy, and I don’t know how long this can continue,” says Samson. He makes it a point to travel with Thaniya to each of her tournaments.

“We have several plans for Thaniya to participate in various tournaments, both within India and outside India, as these tournaments will significantly help her to improve her rankings. But, international travel and accommodation, etc., are expensive,” says Samson.

Until last year, she was balancing academics and sports by taking online classes from a school in Bengaluru. Thaniya is currently looking for similar schools in Hyderabad, which will allow her to pursue her passion for tennis and at the same give her an academic perspective as well.

Throughout her tennis journey, Thaniya says she has been blessed to have the support of kind strangers and benevolent contributors who have made it possible for her to make it so far, either through sponsorships or other contributions. She now wants to make them and her country proud by acing her game!

[100 Emerging Women Leaders] Meet this Silicon Valley techie, who has built core systems at Facebook, Paypal, and Lambda, and now runs her own startup