This economist-turned-belly dancer believes there is much to research in the dance form. Here’s why 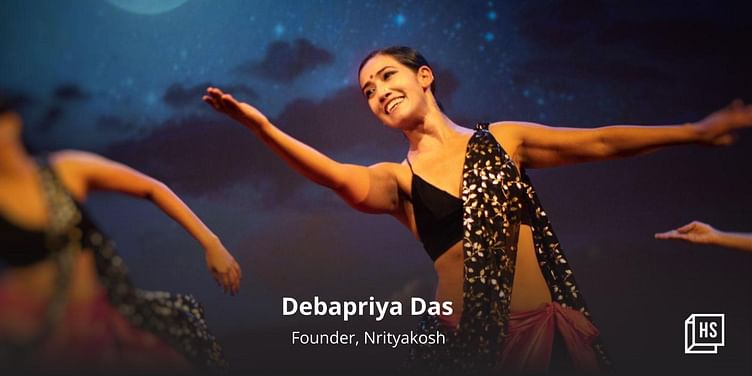 Debapriya Das, an economist-turned-belly dancer, is the artistic director at Nrityakosh, an oriental and fusion belly dance school in Bengaluru. After having worked as a research economist Debapriya turned to belly dancing to pursue her passion for dance.

Debapriya Das spent her childhood in Kolkata and Mumbai, where her fascination with dance began very early. She started training in Bharatnatyam at the age of eight and went on to study other forms like Kathak and fusion dance purely out of interest. After her post-graduation in Economics, Debapriya began work as a researcher at the Center for Study of Science, Technology, and Policy (CSTEP) in Bengaluru in 2012.

Ten years on, Debapriya now runs a successful dance school in the city–﻿Nrityakosh﻿, which is known for its classical and contemporary belly dance.

In a freewheeling chat with HerStory, Debapriya tells us what spurred her to give up research to take up dancing, and why she thinks belly dance as a dance form needs some deep examination.

HerStory (HS): Tell us a bit about how your journey with dance began, particularly belly dance.

Debapriya Das (DD): As a child, I started to learn Bharatnatyam when I was just eight. In 2012, after moving to Bengaluru for a job, which is such a diverse and multicultural city in terms of art and culture, I found myself attending different dance classes--from contemporary to Indian classical dance. I also happened to stumble upon belly dance classes towards the end of 2012, and over the years, this particular art form really fascinated me because it opened up a new culture and new style for me. It was just like learning a new language, which is not yours. And something which is very, very traditional, so, that aspect of oriental dance really drew me towards it.

HS: How and when did the transition from economics to belly dancing happen?

DD: I was 23 when I joined CSTEP, and I absolutely loved the work that I was doing there, which was research in climate change adaptation, poverty, and elevation--all mostly in the aspect of development economics. I even had plans for further studies, and gaining a PhD. But, two-three years after that, since I was so involved in dance, it started to become a big part of my life. I also started travelling to study more about belly dancing, and reached out to some very good master trainers in the US. Since I was investing a lot of my savings in my dance education, and since dance education is very expensive, I started to wonder what is it that I am seeking out of this, was this purely for knowledge-sake? I knew this juggling couldn’t go on forever because it was not sustainable. The decision was very gradual, but by 2017, I decided to pursue a career in dance.

HS: What made you zero in on belly dancing as a profession?

DD: I've been a student of Indian classical dance for a very long time, and I believe every dancer has different ways of moving, different physical vocabulary, and ways of expressing themselves. When I started belly dancing in India, it was perceived from a physical fitness point of view. It was never about how the dance is one of the oldest in the world, its traditional aspects, its chequered history, or how so many countries have contributed to this dance style. So, I felt like there was a lot of research potential for this particular form of dance, which interested me, and made me want to dig deeper and share it with the world.

HS: When did belly dance catch up in India? What is the perception towards it now?

DD: In India, it was sometime in the early 2000s. Meher Malik, who performed the dance in India’s Got Talent, was one of the first to popularise the dance form in the country.

HS: Tell us more about your dance company Nrityakosh.

DD: Sometime in 2017, I became a dance instructor running classes. The first batch saw five to six students, and as my first attempt to start something on my own, it felt very good. Gradually, I started taking in more students, and I left my job and began doing this full-time. The classes eventually turned into a dance school, which I named Nrityakosh.

In 2018, my first production, Safar ae Raat, tailored for the Bengaluru audience, focused on my study at the time, which was on the journey of belly dancing. We did a narrative from the 1790s to the present day, and looked at how the dance has travelled through different countries and its various representations before finally landing in India.

HS: How has that journey evolved for you, and has the perception of belly dancing changed over the years?

DD: The journey has been very good and positive. When we started, it was always those few students who would only take weekend classes because they wanted to pick up a new hobby. But in recent years, we have welcomed students who want to take up belly dancing professionally. They are keen to learn more about a structured path on how to take up this dance style for a career. We have also seen more audience numbers increasing for our productions. I have always believed that if anything is done authentically and nicely, then people will like it. So thankfully, in every production that we have done since 2018, we have always had full numbers, people have really liked the kind of shows that we have created, and the response is really really good.

HS: Tell us more about your latest production, 'Papusza: A Belly Dance production on the Life Of Great Romani Poet’.

DD: Papusza was a very famous Romani poet. She was the first female Romani poet from her community, which is the Romani tribe in Poland. Sometime during World War II, she wanted to read and write and educate herself, but she never got the opportunity to do those things. She did manage to write a lot of poems and songs, and became famous in her community for that. Eventually, she was banished from her community because of her publishing work. Our production is about her life and her resilience. Today, she’s one of the most famous poets coming out of the community, and her poems and songs are studied in Polish universities and other places in Europe. When I first came across her story, I felt that while it was not a simple tale to tell, people could connect with it.

The show is scheduled to be held at Prabhat Kaladwaraka in Koramangala, Bengaluru, on December 3, and at BIC, Domlur, on December 4.