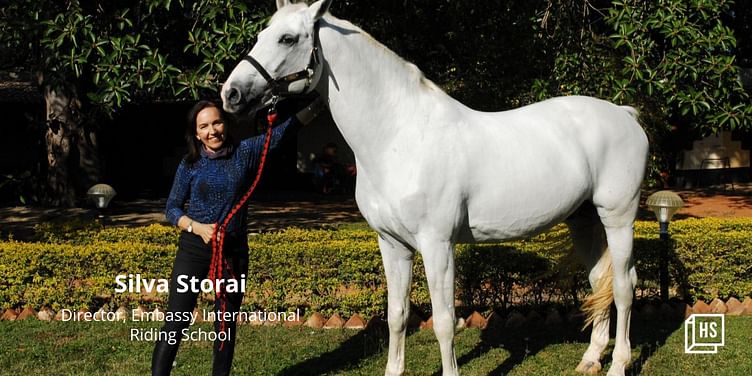 Silva Storai has been the Director of the Embassy International Riding School, Bengaluru for over two decades now. Hear it from the horse’s mouth on the equestrian landscape in India.

As the only female jockey in the world to have won two Derbies, and as someone who leads one of India’s premier equestrian schools, Silva Storai knows a thing or two about the equestrian landscape in India. So, when she says this niche sport is seeing an upward trend in India, and is just waiting to explode, you know there is reason for excitement.

Italy-born Indian jockey Silva is the Director of the Embassy International Riding School in Bengaluru (EIRS), and has been associated with the school for over two decades now. During her time at the school, she has seen the growth of Fouaad Mirza, the 2018 Jakarta Asian Games medalist, who was the first Indian athlete to qualify for equestrian sports, after almost two decades, at the 2020 Tokyo Olympics. Mirza is supported by the Embassy International Riding School (EIRS) in Bengaluru.

In a telephonic chat with HerStory, Silva takes us through the Indian equestrian landscape and the changing perceptions of the sport in the country, training India’s next equestrian champions, and more.

Silva feels the growth of equestrian sports in India in recent years is commendable especially as it is in the backdrop of plenty of challenges, like the shortage of warmblood horses.

“We have many thoroughbreds, which is what India has been breeding for racing. If you want a warmblood horse, one has to go abroad or buy it from someone who has bought a warmblood horse from abroad. So that creates quite a big shortage and it’s not easy,” she says.

Warmblood horses are athletic, agile horses such as a Hanoverian or Trakehner, particularly known for their trainability and calm temperament. On their part, Silva says EIRS started breeding warmblood horses a few years ago, and these horses are now about four-five years old and ready to enter the racecourses.

“To grow in this sport, you need more warmblood horses, which we have started breeding at EIRS. And, maybe like us, other people will start breeding top-class, warmbloods too, so that more such horses are available for races, and it becomes easier to reach that professional level. The horse is the main athlete, so the better the horse, the better the rider,” remarks Silva.

She adds that this shortage of warmblood horses has not stopped parents from investing huge sums of money and importing warm-blood horses, in an effort to prepare their children for competitive-level equestrian sports. The Asian Games trials and the Junior National Championships are the main equestrian tournaments for the 10 to 21-year age groups.

On what it takes for young riders to succeed, Silva attributes it to a combination of factors that include “hard work to a humongous level, that fire in the belly to maintain the intensity and luck.”

She says Bengaluru-born 30-year-old Fouaad had been relentless in his pursuit of equestrian excellence, which saw him become the first Indian since 1982 to win a medal at an individual equestrian event at the Asian Games and qualify for the 2020 Tokyo Olympics.

Riding schools in India have seen a rise, with many major cities like Chennai, Hyderabad, and Pondicherry having good schools for interested riders. “A riding school is good enough for any kid to make a start. The most important thing is to have instructors who are able to teach you the basics very well. Without basics, you can be stunted in this sport as your neuromuscular coordination could be all wrong,” Silva adds.

Stating that EIRS puts a lot of emphasis on getting the foundation right, she says each riding student is assessed before moving on from one grade to another, making it imperative for him/her to understand the basics of handling a horse.

“There’s a lot of pressure from parents on students to win, which is why sometimes I feel parents are the ones who need more coaching. We understand that there is a lot of investment, and that parents only have the best intention for their kids, but the fact of the matter is, it doesn't work if you push your kid in a sport! The kid has to push himself/herself and that’s when they start gathering confidence in their journey, and you see them start opening up like a flower,” says the 60-year-old whose first memory of riding a cavallo (horse in Italian) is from when she was a teenager.

As a young Italian who travelled her way through Turkey, Iran, Afghanistan, and Pakistan, before setting foot in India, and who then broke many barriers when she started racing professionally in 1993, Silva’s story is inspirational for equestrian sport lovers in India.

Besides designing and running a premier equestrian school since 1996, Silva has also been responsible for the conception of the Equestrian Premier League (EPL) in India over a decade ago, and which has seen its clubs increase to over 20 in number since the pandemic.

“A sport is something that you have to be at every day. The EPL has been very rewarding as earlier, we only had one main event in December. It is a six-month tournament, where every month, there are three days of competition, and an amazing platform for riders to be competitive and to keep on challenging themselves, which is important in any sport,” says Silva.

The former jockey says she still rides for fun, but stopped riding in the racecourse four months ago as she has been busy, “but that passion for speed is still in me,” she concludes.

Her love for horses comes through when she says it doesn't matter whether a rider competes in show jumping, dressage or Eventing, what is important is the rider has empathy and is able to connect with their horse and get the best out of them.

“I think if you love horses, there's nothing else you would want to do than have your career with them. It's so rewarding and humbling,” speaks the veteran jockey.

Aiming for a revenue run rate of Rs 400 Cr, here’s how John Jacobs is building an Indian D2C eyewear brand