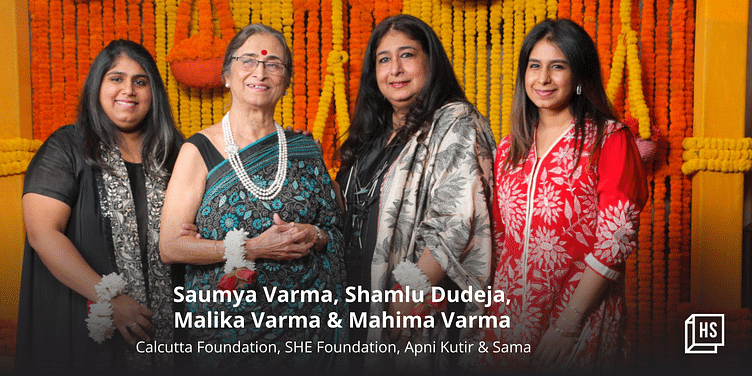 Shamlu Dudeja started the Calcutta Foundation in 1995. Her daughter Malika and granddaughters Saumya and Mahima are carrying her social legacy forward with social initiatives, empowering thousands of women.

At the time of India's partition in 1947, Shamlu Dudeja and her family fled from Karachi to Bombay with only one suitcase of clothes. From being rich landowners, they had to start life afresh as refugees.

She reminisces, “With money borrowed from my mamaji, my father went to Delhi where he got a government job. We followed soon after and the five of us lived in a barsati. Papa’s income was meagre, but my mother never failed to cook an extra chapati, subzi, or meat dish to share it with those in need. She would also tear up her saris to stitch clothes for other people.”

This “care and share” principle Shamlu grew up with has also been the guiding philosophy in her life, one that inspired her to lead the kantha revival in rural West Bengal, and start The Calcutta Foundation.

She’s passed on the same principle to her daughter Malika Dudeja Varma, who heads the SHE Foundation, and her granddaughters Saumya and Mahima Varma, who have launched social initiatives benefiting large communities like Apni Kutir and Sama.

At 84, Shamlu still oversees the running of the Calcutta Foundation she started over 27 years ago and takes interest in its livelihood initiatives for women. Interestingly, she has also written two series of Mathematics textbooks for ages four-14, published by Oxford University Press, and used in schools across Pakistan, Nepal, and India.

Shamlu explains the genesis of the foundation.

“A friend of mine in Kolkata was supporting the musical training of orphan children with an orchestra. When her husband, posted in the US Consulate, was called back to the States, she asked me to take over. I had no idea of western classical music, but the important thing was to raise funds for the children by holding orchestra evenings. This led to the birth of The Calcutta Foundation as an NGO.”

Going beyond just the orchestra, Shamlu started raising funds for bigger projects—a home for children of leprosy patients, and others.

In 1998, on a whim, she left a small note for Australian cricketer Steve Waugh who was staying at the Taj in Kolkata, explaining her work and asking for help. This was the beginning of a long association where the cricketer helped with the Foundation’s various initiatives, including raising funds for the Andamans after the tsunami hit the islands in 2004. Shamlu personally travelled to the islands to oversee the distribution of relief materials at the time.

Income at the doorstep

When her daughter Malika was a young girl, Shamlu would often take her to villages to oversee the training of women in kantha embroidery work.

“I would see mum bring these women home and give them her sarees to work on, increasing their confidence. Till then, kantha work was done by rural women where the art had been passed through generations, and was restricted to baby wraps and bed quilts. My mother took the art to the national level and then to the world through exhibitions,” she says.

Today, the SHE Foundation, that informally began in 1990 and registered in 2003, supports over 80,000 women artisans in rural Bengal by following the simple philosophy of dwaar pe rozi (income at the doorstep).

Moreover, it works towards the welfare and progress of rural women in West Bengal through community development efforts.

“Apart from providing them employment and a stable income, we have been able to look after the communities by making the women financially stable. There’s also healthcare, education, and basic amenities we take care of,” Malika says.

Mahima chips in with a simple explanation for the change in social status.

“I think the work from home concept that has become so popular now is something that’s been allowing thousands of women gain an income, because they can work comfortable hours in their own homes. There’s no pressure to go outside the home to do work,” she says.

During the pandemic, the SHE Foundation was able to pay the women only because “of the unmatchable quality of the work”.

SHE Foundation now supports women artisans across rural Bengal, and has been featured as a case study in the Creating Emerging Markets Project of Harvard Business School.

Following in the footsteps of their mother and grandmother, Saumya and Mahima Varma are taking the initiatives of the Calcutta Foundation forward with two socio-economic initiatives—Apni Kutir and Sama.

Saumya went to college in the US and studied subjects related to human rights and social justice. After graduating in 2019, she returned to Kolkata to work with the communities she had grown up with.

“I started working with The Calcutta Foundation. My idea was to take healthcare to rural areas by partnering with hospitals in the city to start affordable health clinics. My plan was to see this through for a couple of years and return to the US to continue my studies,” she says.

In just five months of the launch of rural outreach clinics, the pandemic hit and doctors got pulled into the frontlines. Their social work would take on a new dimension with her sister Mahima also stepping in.

In 2015, Mahima was in IX standard when the Nirbhaya incident happened. Like most young girls during that time, she too was deeply affected by this violent crime.

“This pushed me to rethink my identity and my place in the society as an Indian woman. Since I had the infrastructure of the Foundation and the support of my family, I was able to start a movement, Girls for Tomorrow. We spoke to lawyers and policemen, and started regular self-defence camps for young girls to drive home why women’s safety was paramount,” she says.

She moved to the US to study at Duke University and also worked in refugee camps in Jordan and Rwanda to understand how women deal with migration.

After her graduation, she had to come back to India in 2020 because of the pandemic. After a year-and-a-half of relief work, the sisters felt helpless and hopeless. The need was large, funds would run out, and the communities needed help in different ways.

“In our interactions with communities, we understand they wanted financial stability through consistent livelihood opportunities. But a lot of women dropped out of school early, and did not even moved out of their homes. There was an absence of a physical place where women could meet other women and also learn skills,” Saumya says.

The sisters’ mission now was to create physical and safe spaces for women, which led them to launch Apni Kutirs, where they learn sewing, spoken English, and other skills, celebrate festivals, and just be together as a community. There are six such spaces in West Bengal–from one in Kolkata’s largest slum to another on the Bangladesh border. The first Apni Kutir in Bihar will be opened in Kishanganj soon.

They also periodically invite a successful woman entrepreneur from the area to talk to the women–so that they too can aspire to dream big.

With Sama, Mahima and Saumya are working on bringing short-term employment opportunities to people across the country. They have partnered with organisations like Microsoft, the Gates Foundation, and startups like Navana Tech that require crowdsourced tasks completed in local languages, and to build simple image data-sets, and are able to offer livelihoods virtually across the country.

Since 2021, Sama has expanded its network and established operations in 80+ districts across 20 states and union territories, successfully bringing income to over 25,000 people.

While their grandmother Shamlu raised funds for the Foundation through gala fund-raisers and events in the past, her granddaughters are tapping into CSR funds and partnering with other foundations. They also work informally with local governments like gram panchayats for approvals. Apni Kutir works with a team of 40 and Sama with 20 full-time employees.