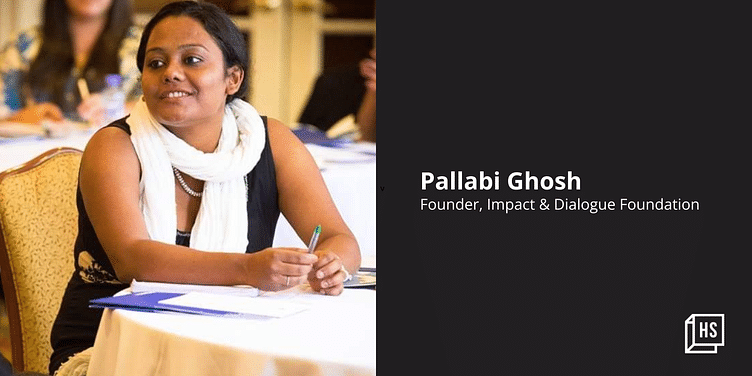 Pallabi Ghosh is an anti-trafficking activist who has rescued hundreds of women and children from child marriage, forced marriage, child labour, and prostitution. With Impact & Dialogue Foundation, she aims to create awareness about trafficking of all forms.

In 2013, Pallabi Ghosh received a phone call that a young girl was confined in a house in a posh colony in New Delhi and tortured. Pallabi, who was a part of anti-trafficking NGO Shakti Vahini at that time, ignored the call at first because she had been receiving similar messages in the past week that had turned out to be fake.

The call came again and, judging by the tone of the voice, she knew this was something serious. She approached the local police station and kept waiting till they assigned her a woman police officer, who, at that time, was seven months pregnant.

“I was worried and nervous as to how she was going to help. Nevertheless, along with an official from another organisation, we knocked on the door of the house. An old lady peeped through the netted door; two huge dogs were barking beside her. I asked if they had a maid at home but got no response,” recalls Pallabi.

The team had received information that a young girl, who had been trafficked from Jharkhand, was being subjected to the torture of all kinds by a woman, who was the South Asian head of a huge multinational company.

Pallabi continues, “We kept waiting till 8 pm when the woman finally turned up with a lawyer. She was agitated and shouting. We calmly informed her that we just wanted to verify because we had received a complaint. On entering the house, we saw a girl, hunched and sitting cross-legged on the floor, completely naked.”

The girl was covered in bruises from top to toe, with all signs that she was battered. Her face was deformed with cuts. Pallabi took her to the nearest hospital where they were shunted from one department to another until a doctor agreed to take a look at the girl.

“With one hand, I was holding the girl’s hand, and the saline bottle with the other. It was a nightmare. She had injuries on every part of her body and maggots on her head,” says Pallabi, reliving the traumatic incident.

It was apparent that the employer had been taking out her anger on the girl. She was shut in the bathroom, her head was repeatedly banged against the wash basin, and she was given food in a newspaper.

After the rescue, the girl was reunited with her parents in Jharkhand. And Pallabhi heard that she was married off later.

Eventually, the accused was let scot-free by the court even after the girl had testified many times and the case had dragged on for three years.

Trafficking has no boundaries

Pallabi, who was born and raised in Lumding, Assam, has so far rescued more than 7,000 girls and boys from trafficking, along with law enforcement agencies. She recalls that, when she was 18, during one of her journeys in 24 Parganas, West Bengal, she met a father who told her that his daughter was missing.

“He was howling in grief and fear. When he tried to lodge a complaint with the police, they brushed it away saying that she must have run away with some boy. Upon interaction with a boy from a village, I came to know that a stranger used to regularly visit the village and he (the boy) had seen the girl talking to him,” she says.

Pallabi lost touch with the father and she couldn’t do anything to find the whereabouts of the girl. This left a deep impact on her and she started researching on trafficking in West Bengal and the northeastern states. After completing her BA from Delhi University and a master’s in gender studies from Chennai, she joined Shakti Vahini to take her work forward.

Pallabi points out that trafficking has no boundaries when it comes to age. She recalls another incident where she received a call from a 58-year-old man in Assam that his 52-year-old wife had been abducted and was in Haryana.

“I took the missing complaint to the SP of that area and asked for support. I then went to the police chowki in the village and spoke to the officer-in-charge that we were there for verification. We asked the khabri (informer) from the village whether a woman (a stranger) was seen in these parts. He said that a new girl had come to the village. I was confused,” says Pallabi.

In fact, the 52-year-old woman, who was petite and less than 5 feet tall, had been mistaken for a young woman, kidnapped, and brought to this village in Haryana, to be married to an intellectually-challenged man.

When Pallabi went inside the house and tried to rescue the woman, she was met with stiff resistance. More than the men, the women of the house pulled her clothes and tried to stop her. Somehow, she was able to get out of the place along with the kidnapped woman.

Later, the rescued woman told Pallabi how she had befriended a woman who had come to sell plastic items in her place. And one day, she had a cup of tea brought by her. When she woke up (she had been drugged), she found herself in the village in Haryana.

Pallabi says this is not an isolated incident. Villages in Haryana are rife with such kidnappings, and there’s no intervention by the other villagers or the police.

She speaks of many other rescues, including a four-month-old infant who had been sold off by her mother and a woman who was a victim of polyandry—in a mission and cause that was fraught with risk and danger.

“I have lost count of the number of threats I have received. Pimps call me up and say they’d buy me a house if I stop the raids. I am always on my guard, taking different roads to reach my home each time. I don’t divulge much of my life on social media,” she says.

Pallabi left Shakti Vahini in 2016 and began working with other anti-trafficking organisations. As a person who had been interacting with the survivors first-hand, for more than a decade, Pallabi realised that just rescuing an individual from trafficking would not help until the person was rehabilitated.

Tackling the problem at its source

After rescue, rehabilitation is not what it seems to be.

“Most organisations believe rehabilitation means reintegration with the family. But how are you empowering the child? First, the child was dependent on the father, then sold off, and, after rescue, the child is being married off? What kind of rehabilitation is this?” asks Pallabi.

She admits there is a serious problem with shelter homes where the rescue children are housed with the intellectually challenged, rape survivors, and convicts and live in pathetic conditions.

This led to her thinking beyond rescue to tackle the problem at its source.

Impact and Dialogue Foundation focuses on Assam where Pallabi reaches out to social welfare departments and panchayat (village council) leaders, explaining the need for awareness sessions on trafficking and how they would benefit.

“Transportation is a big challenge in Assam, and I travelled to remote places using trains, buses, and bullock carts. I reached out to educational institutions, workers in tea gardens, people in the tribal belts, police personnel, transport officials, and workers to spread awareness about human trafficking, initiate dialogues among stakeholders, and conduct training sessions, workshops, and street plays,” she explains.

Due to the pandemic, Pallabi could not physically meet people till September 2021. Since then, she has reached out to more than 75,000 people. She talks about issues such as human trafficking, menstrual hygiene, school dropouts, gender-based violence issues like female foeticide, genital mutilation, dowry, and domestic violence, child marriage, child abuse, LGBTQI rights, and equal empowerment of the sexes.

Pallabi is known as Kahaniwali Didi (Storyteller Sister) who shares real-life incidents that the target audience can comprehend.

Pallabi is a one-woman army with no sponsors to back her. She uses the money she receives as a consultant to many organisations for her purpose. Whenever anyone wants to volunteer, she makes sure she pays them for their food and travel.

The apathy, Pallavi points out, lies in the fact that the NGO sector works in silos. Very little funding is given to the cause. She says she has to often “beg” educational institutions to give her a platform to raise awareness, that too without any fee.

Currently, she’s in Bengaluru to raise awareness on how technology is being used for trafficking.

“I want to break the stereotype that only the poor get caught in trafficking. Educated people are now victims of cyber abuse. Young people are being radicalised, boys as young as six or seven years old are being used as drug peddlers. And it’s important that people know about these,” she says.

Her plan going forward is to “save ten lives and empower ten lives”. “These people should then go on to empower other people in their villages and stop trafficking at its source. I don’t want to be in a position where I have rescued 10,000 children and don’t know what happened afterwards,” she concludes.