Meet the Warrior Moms who are fighting climate change 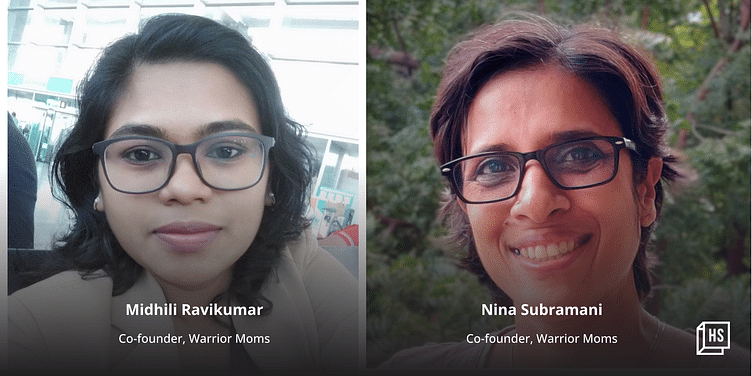 Warrior Moms is a network founded by 10 mothers who came together two years ago with a common aim of fighting for their children’s right to breathe clean air. They have launched different initiatives to combat climate change and raise voices against air pollution.

According to a report by the World Health Organisation (WHO), 98% children in India breathe toxic air with more particulate matter than its recommended norms.

A few years ago, frightening photos of blackened lungs emerged as lung surgeons tried to get the attention of the country to the alarming issue.

“As children grow, they suffer acute damage as pollutants accumulate in lungs—lung diseases, asthma, allergies, bronchitis, pneumonia, lung damage, reduced lung capacity. Alongside this, the tiny particles (PM2.5) enter the bloodstream and cross into all major organs of the body causing damage that is long-term and irreversible,” says Midhili Ravikumar, Co-Founder, ﻿Warrior Moms﻿, a collective of moms across India fighting climate change.

“The list of diseases caused by the inflammation is increasing, from cognitive damage and stunted growth to lifetime risks of obesity, heart disease, stroke, COPD, diabetes, Alzheimer's, and mental health issues like depression. Babies in the womb are affected by the pollution the mother is breathing, leading to preterm births, low birth weight, and possible birth defects,” she adds.

A bunch of concerned mothers connected through various networks and social media platforms decided to do something about the issue, forming the Warrior Moms in 2020.

The core mothers (co-founders) on the platform include:

Nina – A documentary filmmaker and teacher, Nina has been passionate about fighting air pollution since her student days. She developed asthma as an adult due to vehicular pollution and went on to witness her own daughter suffering from breathing problems in her infancy.

Sherebanu (Sherry) –A proactive mother from Gurugram is an avid cyclist and an active participant in community activities, her drive to bring about environmental change is fuelled by her two children.

Midhili – She started researching air pollution, among other possible environmental factors for cancer, when close family members were affected. She is passionate about reducing waste and finding sustainable means of living.

Anuja – She was forced to be over-protective of her little one owing to his wheezing attacks due to the terrible air quality.

Bhavreen – She spearheads several public movements pan-India that bring attention to environmental justice issues. She has facilitated and managed campaigns like #MyRightToBreathe, #FridaysForFutureIndia, and #DelhiTreesSOS.

Leena Buddhe – She is the Director of the Center for Sustainable Development, an organisation that works in Nagpur.

Samita – Having grown up in rural Punjab, she identifies with the problems faced by the farmers of her state and brings various farmer groups together to discuss the challenges they face. She leads the Warrior Moms Punjab campaigns, highlighting issues around waste, health, and pollution.

Manorama – She hails from Jharkhand and belongs to the tribal community, Oraon, and has been working for the upliftment of women since the late 1990s. Her mission is to empower the marginalised communities especially tribals, Dalits, and deprived masses towards formation of a sustainable, self-reliant, autonomous, accountable, and democratic socio-economic, political, and cultural system.

Gargi – She is the Outreach Lead Manager for Bengal Clean Air Network.

Change at the grassroots level

Currently, Warrior Moms has 10 core mothers and a network of 2,000 plus mothers who have joined the movement in nine states across India.

After Warrior Moms was formed, each one of the mothers started reaching out to their respective networks and communities to take the message and demand for clean air forward. Warrior Moms collaborated with various organisations with shared goals, like Doctors for Clean Air, Raahgiri foundation, etc., to conduct online and offline awareness and engagement sessions on topics like the health impacts of air pollution, sustainable mobility, etc.

Warrior Moms is actively engaged with various campaigns related to air pollution across India. These include:

Seventy-five percent of people in India rely on chulhas burning biomass to cook their food and for heating purposes daily. Most chulhas are set up indoors in small, poorly ventilated homes where women and children are exposed to the smoke emanating from it several hours continuously causing severe adverse health effects including increased incidences of still births, miscarriages, blindness, and lung diseases.

Warrior Moms has interacted with women from many places in the country to understand their challenges in balancing out health, domestic duties, and family budget with the rising costs of LPG cylinders.

It is pushing for subsidised gas cylinders for all families in India through the campaign #ChulhaFreeIndia.

Know Your Rights is a city-wise database of information to register complaints against the four main sources of air pollution: tree cutting, construction dust, garbage burning, and vehicular pollution.

“The downloadable and shareable posters which are available in local languages like Hindi, Marathi, and Tamil contain information on phone numbers to call, twitter handles to tag and websites to register citizens’ complaints when they see an environmental violation,” shares Nina Subramani.

Another initiative is Clean Up Daddumajra where 45 acres of land in Chandigargh is occupied by the Daddumajra Landfill, which has affected air quality and water sources because of the tons of unsegregated waste dumped every day, which increases the risk of danger from fires peak summer.

“Warrior Moms is actively spreading awareness on this issue and working towards clearing the landfill, by talking to local MLAs, MPs, and the Municipal Commissioner of Chandigarh. In October 2022, Warrior Moms, Punjab, conducted a photography contest and exhibition at Punjab Kala Kendra to highlight the plight of the people residing near the garbage dump,” says Nina.

Warrior Moms will help local administrators, who have offered their support in finding a solution to this menace.

The collective also works with community networks such as ASHAs and SHGs.

Rama is an ASHA worker in the slums of Bharola and adjoining neighbourhoods in North Delhi. When she visited several households as part of her work as an ASHA, she realised the issue of household air pollution due to burning biomass (chulhas) was a major issue among the urban poor of Delhi. She wanted to do something about the issue and thus decided to speak to the women in the households to understand the reasons behind not being able to switch to cleaner alternatives such as the LPG.

“For the urban poor, managing two square meals a day is a challenge so they cannot afford an LPG cylinder due to skyrocketing prices. Many families also lack the documents to procure a cylinder as they have migrated from elsewhere and live in informal settlements. My goal is to at least make them aware of the harmful impact of biomass burning especially on the health and well-being of women and children so that we can put up a collective fight for clean air and push our government to ensure clean cooking fuel for all,” Rama says.

Warrior Moms, in collaboration with Centre for Sustainable Development (CFSD), conducted a survey in urban Nagpur to understand the access and pattern of different cooking fuels and the associated health impacts.

A total of 1,500 households from 12 slum pockets were covered in this survey, which found that all the respondents found LPG cylinders unaffordable. It also found that using biomass also causes an additional burden on women as it is their job to gather firewood, which takes four-five hours every week. Even though Pradhan Mantri Ujjwala Yojana (PMUY), a government scheme, has been trying to ease this problem by providing gas connections to underprivileged women, the survey results showed that a large portion of the population is still unaware of the benefits of the scheme or has to resort back to wood-fired stoves since they are unable to refill the cylinders once the free cylinders are used up.

Based on the survey findings, a policy report was released in June 2022 and a photo exhibition organised featuring Padmashri photographer Sudharak Olwe highlighting the plight of women who use chulhas in Nagpur.

“Warrior Moms’ long term goal is to enable and empower rural and urban Indian mothers to engage with relevant stakeholders and demand accountability from public and private authorities to ensure clean air according to WHO standards. Our Warrior Mom, Bhavreen Kandhari will meet other global parent delegates in upcoming COP27 to appeal to world leaders to make concrete plans to improve air quality worldwide and thereby give our children a fighting chance at a healthy life, which they deserve,” says Midhili.