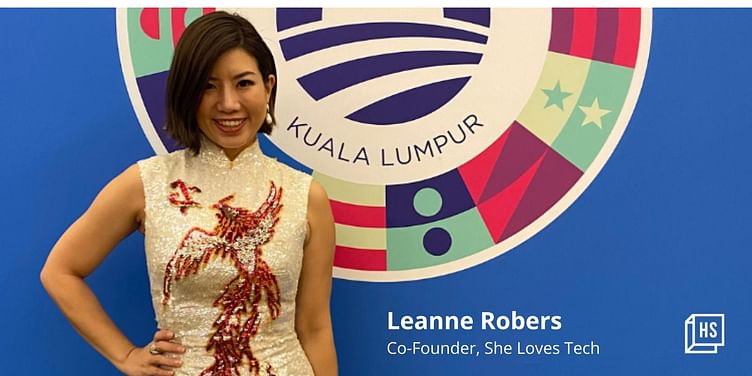 Leanne Robers, along with Virginia Tan and Rhea See, started She Loves Tech in 2015. It is the world’s largest acceleration platform for women in technology, and holds startup competitions in 72 countries.

When Leanne Robers was building her second startup Comish, an ecommerce platform that connected people with creators who personalise art, music, food, and fashion, she often found that at meetings, investors would direct questions about the product to her male co-founder, Kevin.

“He would tell them, ‘Please ask Leanne, she knows the business and the product’, but people would still not look me in the eye, even when I was presenting it to them. All business or product-related questions would be directed at Kevin. It was very challenging trying to find my voice,” says Leanne Robers, a co-founder of ﻿She Loves Tech﻿, the world’s largest acceleration platform for women in technology, present in 72 countries.

The stereotypes and judgements never stopped coming, she adds. “I was constantly being told women don’t like building technologies, they don’t build great tech products.”

She was also told, to her face, “it’s not good to invest in women, because they will leave and start a family”.

“Honestly, women tech founders work harder on their startups than anyone else. It’s so untrue that they will give up one “baby” for the other. It was difficult to find my voice, and I thought it was time to do something about it,” Leanne says.

Prior to Comish, Leanne built The Hedge Club, a social media trading platform that connected budding fund managers with retail investors in an unbiased marketplace by showcasing managers’ investment performance and publishing it on social media to attract investment capital.

After finishing her school in UC Berkeley with a degree in Psychology, Leanne began her career with Siemens UK.

Though born in Singapore, Leanne moved to the US with her parents when she was seven months old as they continued their education there. She returned to Singapore for primary and secondary school, and spent the first two years of college at the National University of Singapore.

Woman in a man’s world

Leanne’s stint at Siemens saw her becoming one of the youngest women managers in the organisation at 24.

“I was doing international business development for Siemens Mobility for their trains and railway solutions. Most of my team comprised men, some of them a lot older than I was. I was different from everyone else, and it was a challenge to find my identity and my voice. My manager supported me throughout and encouraged me to find my own perspective,” she says.

In an environment dominated by men, women are always asked to fit in and Leanne found herself tackling statements like, “you should try to look older, wear glasses, pantsuits, learn how to drink beer, play golf, and be one of the boys”. Thankfully, once she understood her “perspective”, nothing mattered and she used her “differences” as strengths, rather than as weaknesses.

In 2015, Leanne, along with Virginia Tan and Rhea See, started She Loves Tech. The three of them got together through mutual acquaintances and were united by a love to build a unique platform for women and “change the equation”.

It started off as a passion project with an event in China. In the next year, they were in four countries, and fast forward to 2022, She Loves Tech conducts 28 rounds of competitions across 72 countries, including regional rounds. It is a global platform and a stage for entrepreneurs to showcase, provide access to funding opportunities, and equipping them with skills and resources to take their business to the next level.

She Loves Tech has different verticals that include a startup competition run in 72 countries, education programmes, a boot camp for global finalists, and a global conference. This year, it has attract over 5,000 startups.

The competition is run through partnerships in all countries.

“We have the core global team that makes sure everything is standardised and sets the processes while on ground. We need partners who understand the ecosystem and have access to the startups and understand the market very well,” Leanne explains.

In India, the Kerala Startup Mission (KSUM) runs the She Loves Tech competition at its annual Women Startup Summit. In Bangladesh, She Loves Tech has tied up with Turtle Ventures, and in Mangolia, with Kite Accelerator.

These partnerships, Leanne points out, are important because startup trends in Asia, for example, may be different than in the US.

She elaborates, “In India, Bangladesh, Pakistan, or Sri Lanka, we see a lot of medtech solutions. Whereas in Singapore, we see a lot of AI and deeptech solutions. So, the judges assess the startups, not just on the sophistication of the technologies, but also at opportunities for them to grow and scale, and how they can become successful.”

Leanne believes India is a unique country because of its sheer size and opportunity.

She takes the example of CyCa OncoSolutions, founded by Dr Nusrat Sanghamitra, that won the third prize at the She Loves Tech Global Startup Competition 2019 held in Beijing. Based in Odisha, the startup has developed a ‘path-breaking cancer drug delivery device’. Mentored by Kerala Startup Mission (KSUM), CyCa OncoSolutions has developed an 'efficient, non-toxic invitro and in vivo' delivery method to combat cancer. It works through a nano-technology driven molecular drilling device and directly delivers anti-cancer medicines to the affected cells. It is expected to cause very little harm to the unaffected cells and display fewer side effects.

Leanne agrees that women entrepreneurs continue to face challenges during the pitching process, and with mentorship and training.

“VCs are still primarily men, which means they don’t understand the kind of technologies women are building. They are already at a disadvantage because of this. Also, it’s the women who are asked, 'When are you breaking even?', while the men are asked about a $1 billion valuation," says Leanne.

"Also, because most VCs are men, male founders are able to attract larger check sizes. Also, women tend to pitch realistically, what they can do at a point in time, not like men who pitch what they are aiming to become.”

She Loves Tech does not charge any fee from its partner organisation and relies on its corporate sponsors–big names like UBS, P&G, Swire Group, McDermott, Will & Emery, and others.

Leanne also positions She Loves Tech as a catalyst that opens doors for women to succeed.

“We aim to close the funding gap by starting our own $20 million fund so that we can fund the startup ourselves. We are hoping it eventually grows to $200 million, because we believe, that’s what moves the needle,” she concludes.