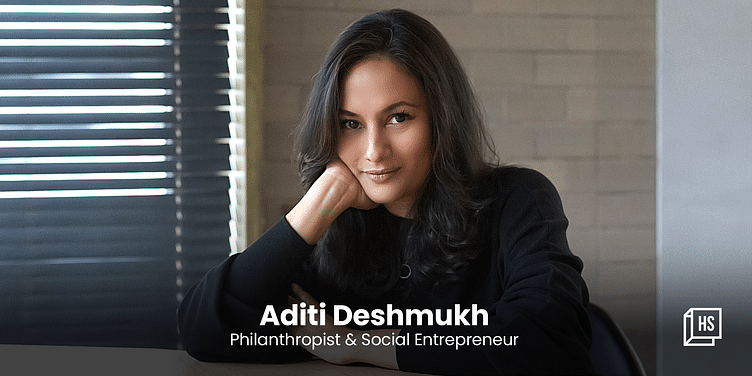 Aditi Deshmukh closely works with the Vilasrao Deshmukh Foundation to help villages in Latur become sustainable, through various initiatives. She is also the founder of 21 Organics, a farm-to-table venture.

After a successful career as an actor and model, Aditi Deshmukh married into one of the most prominent families in Maharashtra. She is married to Amit Deshmukh, whose father, Vilasrao Deshmukh was the former chief minister of Maharashtra.

“After a career in the performing arts for 10 years, I moved into a space where I felt there were a lot of opportunities and resources at my disposal to be able to effect change,” Aditi tells HerStory.

She would frequently visit urban and rural areas of Latur in the Marathwada region and closely interacted with various communities, especially with farmers, women, and youth.

Aditi started working closely with the Vilasrao Deshmukh Foundation in 2008 to effect change in rural areas.

“The region has been affected with challenges that keep changing over time. It would be healthcare one year, drought in the next, and so on. But the general challenges for the youth and women in Latur and surrounding areas, and rural Maharashtra would be in healthcare, an area we chose to focus on,” she says.

There was also need to provide gainful employment for women in their own homes. Aditi points out that most of them manage their homes as well as their land, and it’s difficult for them to uproot themselves and move to cities for jobs.

“Our focus has been to bring enterprise into their own homes, be it through farming initiatives, or skilling them in textile work, like cloth bags,” she says.

One of the objectives of the foundation has also been to educate people about the harmful effects of plastic bags and switch to cloth bags made in their own villages.

The foundation works with 26 villages in Latur, which is a drought-prone area.

“In 2016, when the region was undergoing a severe drought, we brought in hundreds of water tankers from Maharashtra and the other areas, providing them with drinking water and for other needs. At that time, children were falling ill and sourcing safe drinking water was a bigger challenge.

“We started a small project along with the community, which has scaled now. We set up a water filter for use in villages. Twenty litres of water were provided for a nominal charge of Rs 5. It went towards covering the cost and maintenance,” she recalls.

“When you start in one area, you realise it's all connected. To make any one particular area effective in the way that you intend for it to be, you need to work in the other areas as well, to focus on maybe one or two particular initiatives,” Aditi says.

The foundation has collaborated with Metropolis Foundation to start Project Udaan, to bring in skill development, self-defence training, and healthcare. There are plans to build on it and it has impacted 2,500 lives so far.

Life as an entrepreneur

Having grown up in farms on the outskirts of Bengaluru, Aditi always had access to fresh milk, vegetables, and fruits.

“In 2013, when my children were still little, I began looking back at my childhood and wondered why my children couldn’t have the same. All the stories about toxins and chemicals in food began to worry me. So, I went back and started farming on a patch of land in the village, and that grew organically grew into a venture,” she says.

21 Organic is a farm-to-table organic food venture that promotes sustainable agriculture by providing climate-resilient crops, transitioning farmers back to natural farming practices, and establishing a supply chain for organic produce to directly benefit the farmer.

Aditi realised that a lot of farmers were interested in organic farming, but didn’t have a market for their products.

She explains, “Organic farming is rife with challenges, including loss of yield and different techniques; you have to actually unlearn how you have been farming for the past 40-50 years and go back to an ancient system. But once we saw its potential, we knew we could help farmers transition from conventional farming to an organic model.”

The next challenge would be to enable them to connect to markets in urban areas.

She started in Latur on her own farm, which became a model farm for other farmers. Soon, she had curious farmers asking, ‘why are you not using chemicals, what is the fertiliser you are using, why are the tomatoes so big’, and so forth.

Aditi recalls that even in 2016 it was not easy to source an entire basket of organic vegetables. That led her to create her own fresh-from-the-farm baskets for friends and family.

“We focus on seasonal and regional produce and not on vegetables like broccoli and iceberg lettuce. The land and soil will naturally support vegetables indigenous to the region. In the monsoon, we don’t grow greens, because the land won’t support it. In the winter, we grow more tubers, carrots, and radishes,” she says.

In 2020, when the pandemic hit, they had managed to transition 2,500 acres of land in rural Maharashtra to organic farming. They began growing sugar organically and grew other vegetables on small patches. The same year, there was a discussion on ashwagandha and demand for Ayurvedic herbs rose.

“My biggest inspiration has come from family. Their work is humbling, selfless, and my husband is my biggest support in whatever I choose to do. His tremendous capacity for work and compassion inspires me on a daily basis. I feel I have a responsibility to help in whatever way I can,” Aditi says.