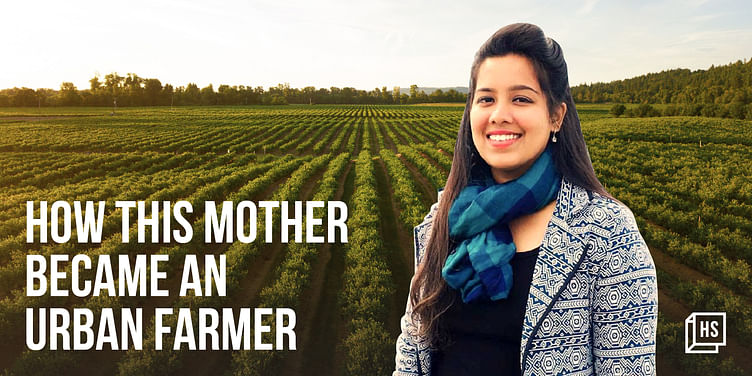 Following the heart surgery of her six-month-old infant, Subhashree Santhya started growing vegetables in the balcony of her flat in Navi Mumbai. Now, she’s an urban farmer with a one-acre farm and her own brand of traditional porridge mix.

After completing her BTech in Mechanical Engineering from PSG College of Engineering, Coimbatore, Subhashree Santhya followed the conventional route, working at companies like TVS and Veer Engineering before veering into a different direction altogether.

During the pandemic, her younger son, just six months old, had to undergo a heart surgery. Following this, the doctor advised a “chemical-free” and clean diet, in essence organic fruits and vegetables.

Santhya began growing plants, especially different varieties of medicinal spinach, in the small balcony of her flat in Navi Mumbai. Little did she realise then that it would lead to a complete shift in her life, and lead her to becoming an entrepreneur.

“We didn’t have any history of heart disease. After the surgery, the doctor recommended food free of additives or adulteration. Since we already practiced clean eating habits, I thought why not grow organic vegetables on my own,” she tells HerStory.

Santhya now wanted to make sure her children's food was of optimal quality and nutrition.

She decided to take a break from her career to focus on this new direction in her life. Unaware of any kind of agricultural practices, Santhya started learning on her own, starting with basic spinach, tomatoes, okra, and white pumpkin.

“I made my own fertiliser by using kitchen waste, bought earthworms from the nearby nursery, and started making my own compost,” she says.

This led to a WhatsApp group with mothers in the same building and nearby apartments who also wanted to grow their own vegetables. She decided to use money she had kept aside to buy a flat in Navi Mumbai to buy a farm, half-an-hour away from her home, in Kalapur, where most of the work is now being done.

Santhya pans the phone camera to her balcony to show where it all began. There are bushes of spinach and other vegetables growing in pots. Though the spinach grown is native to Tamil Nadu, she has managed to grow them with the help of fertilisers and proper soil care.

“I realised that I need to scale it up a bit when several women, mostly mothers with children who had undergone surgeries, asked me to provide them with organic vegetables, especially spinach. But, for this, I needed to be equipped with more knowledge and skills,” she says.

She pursued a master’s degree in sustainable agriculture from IIT Kharagpur.

“My aim was to do something to make sure that as many children as possible had access to natural food that is free of adulteration, like my own. I also spent three months with farmers in Coimbatore and Pondicherry engaged in traditional agriculture and learned the ins and outs of organic farming," she adds.

Lalita Mukati is championing organic farming in MP’s Barwani district, one farm at a time

The power of traditional foods

She chose the top 10 varieties of traditional food grains, out of which she opted for black rice, red rice or mapilla samba, and mixed it with a few varieties of millets and pulses in the right proportions into a powder form, which could then be used to make porridge.

Branded under “Mud and Mother”, the porridge mix is rich in minerals, antioxidants, calcium, iron, potassium, and carotenoids. It’s also been tested in a lab to ascertain its quality and nutritional content.

Currently available on Instagram and made popular entirely through word-of-mouth, Santhya believes stocking it in physical stores or selling it on marketplace will increase its cost, and she wants to make it accessible to everyone and doesn’t want to sell organic food at a higher price. It sells at Rs 80 for 25o gm. The powder is manufactured in a small unit Santhya has set up in Coimbatore, her hometown.

She now wants to associate with more farmers to popularise traditional food grains, and if possible, also grow them on her farm. She has tied up with another farmer to grow organic sugarcane and produce organic jaggery powder. The growth is slow, yet steady.

Santhya believes that anyone with a little space to spare can start growing organic vegetables. Her enthusiasm has also rubbed off on the people in the building who are planning to use the common space to grow a vegetable garden. They have also agreed to help in making their own manure out of kitchen waste.

“Growing your own vegetables may have turned out to be a great pastime for many, but in the long run, it will contribute to the good health of your family. Who knows, in just a few years, we may have to pay Rs 40 for two tomatoes. Growing your own makes more sense,” she concludes.

Meet the woman entrepreneur whose startup 'mushroomed' digitally amid the pandemic