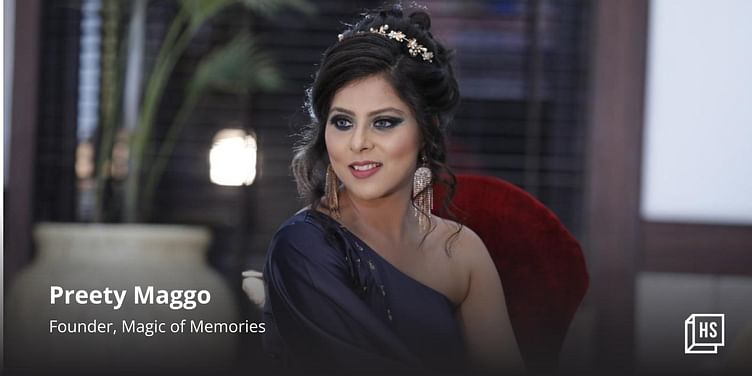 In 2019, Preety Maggo started Magic of Memories, making keepsake jewellery from breast milk, hair, parts of the umbilical cord, blood, and more. She may not have received funding on ‘Shark Tank India’, but she’s confident of scaling her unusual venture.

In 2019, Preety Maggo started ﻿Magic of Memories﻿, making keepsake jewellery from breast milk, hair, parts of the umbilical cord, blood, and more. She may not have received funding on ‘Shark Tank India’, but she’s confident of scaling her unusual venture.

When Preety Maggo pitched her venture, Magic of Memories, on Shark Tank India Season 2, she did not receive any funding. Instead, a 'Shark' greeted her pitch with an ‘Eww’.

Preety’s unique idea of custom-crafted keepsake jewellery made with breast milk and other keepsakes, such as a baby’s first hair or parts of the umbilical cord, sounded bizarre as well as unique.

But, despite the evident show of disgust, Preety faced all questions with confidence and ended the pitch with the conviction in her belief that Magic of Memories would work, despite the doubts raised by the Sharks.

The experience was phenomenal, Preety tells HerStory, a few days after the pitch was aired on national television.

“I never thought I’d be selected because there can be so many social stigmas around the work I am doing,” she says.

While the idea of keepsake jewellery is not unknown in the West, Preety came upon the idea while crawling on Instagram and discovering a German company making breast milk jewellery.

The optometrist hit upon the idea of bringing it to an Indian customer base, though she understood that it would not be easy because it’s niche.

Preety started researching to offer “safe” jewellery that can be won by parents, babies, and even a pregnant woman. Mother to a baby girl herself, she wanted to preserve her breast milk in a piece of art. She started designing jewellery and started Magic of Memories in 2019.

Based in Delhi, she took to WhatsApp and Facebook groups of mothers she was part of to introduce her idea. Slowly, but steadily, she began receiving orders from friends and family, who spread the word after receiving their products. Soon, people outside her friends’ circle started reaching out to her and placing orders.

She started off with hair and breast milk and then kept creating new variants using parts of the umbilical cord, or pieces of clothes of dear ones.

She creates jewellery based on client requests, for both the product and its treatment. Each piece is customised, and she presently offers rings, pendants, and bracelets. For example, she dehydrates breast milk before it is used, and uses a dry form of human blood (when requested) in the jewellery.

“Since I have a medical background, I use the basics of physics and chemistry to preserve the particles in the jewellery,” Preety says.

She continues to research what could be used to help people have unique keepsake jewellery.

While people may titter at the idea, Preety believes it’s all about memory. For instance, a client had a few drops of her father’s blood and wanted to preserve them. Getting jewellery made was emotional for the family, she says.

She has also launched pet keepsakes for pet parents. Most of her marketing is done organically through Instagram where she has over 65,000 followers. She has made 600 custom pieces for clients so far.

Most of her orders come for breast milk jewellery, followed by those for hair and parts of the umbilical cord. Once, she received a “bizarre” request came for preserving semen but turned it down.

On Shark Tank India, the sharks questioned her ability to scale and thought she should just concentrate on a single piece of jewellery, for example, hair.

“Maybe they are not aware of this concept. But I’m sure in the future, they will hear of it from other countries. Since it’s new to them, they reacted in a certain way,” Preety counters.

“If I offer only hair jewellery, I will not be able to cater to a wider customer base. It can also be easily copied by other artists,” she says.

After her pitch was telecast, messages have been pouring in from across the world.

“I’m overwhelmed by the love and respect of people. My phone has been ringing non-stop for the past 10 days. It’s a mixed reaction, of course. I can say 20% are against the concept, even asking me how I could talk about breast milk on television, not understanding it’s a natural process. But overall, the response has been very encouraging,” Preety shares.

Her monthly revenue is now around Rs 5 lakh and she is raising funds to expand her team, hire skilled karigars and provide training and employment to women from under-privileged sections of the society.

Several investors have also approached her since the pitch, but Preety wants to improve upon certain aspects before she joins hands with anyone.

Her ask at Shark Tank India, she points out, was a mere Rs 25 lakh. “I am confident that I will raise more than what I had asked for, and also scale this business and make profits,” Preety says.