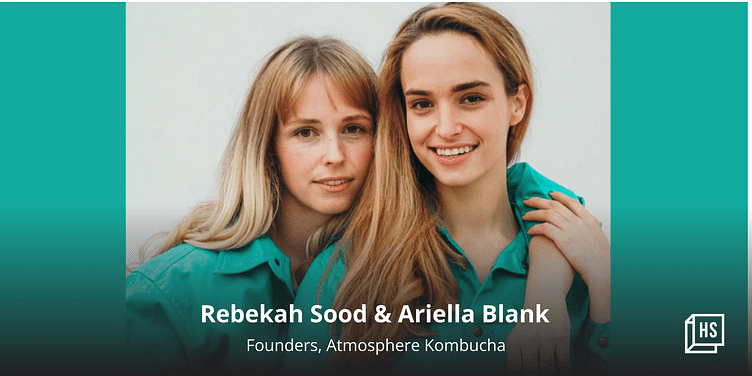 Rebekah Sood and Ariella Blank, daughters of a professor at IIT, started their homegrown kombucha brand, Atmosphere Kombucha, in 2018 in India.

When American sisters Rebekah Sood and Ariella Blank pitched their startup, ﻿Atmosphere Kombucha﻿, on the Shark Tank India Season 2, they impressed the viewers on two counts–their pitch was in shudh Hindi and their confidence shone through despite the difficult questions the Sharks threw at them.

Though the sisters failed to receive funding, they are thankful for the recognition and reach they have received through the show.

“It has given us a whole new level of exposure as a brand. There was someone I had been messaging constantly without any response. After our pitch was aired, they messaged us asking to connect. In less than two weeks after the episode, we have made connections with different people, and there has been a surge in orders on our website,” Rebekah tells HerStory.

She admits that in the moment, they were disappointed in not receiving funding though she had an inkling that the investment may not happen.

“If they wanted to invest, I felt that we may not get a good valuation. I remember we were shooting until midnight and the next morning, we had a meeting with Nature’s Basket. We kept going and didn’t let it get to us,” she adds.

She shares that they have now raised the amount they had asked for at Shark Tank India.

Atmosphere Kombucha has an interesting backstory and roots in the sisters’ upbringing in India and hence their “pitch-perfect” Hindi.

Their father was a professor at IIT-Kanpur and IIT-Kharagpur, and Rebekah came to India when she was just one-and-a-half years old, while Ariella was born here. After completing their schooling, they moved to the US for college, where both pursued courses in computer science.

“In fact, Ariella wanted to be an actor, but my parents insisted she study computer science, so she has a double degree, with theatre as well. We joke that our parents are more Indian than Indian parents,” she says with a laugh.

After finishing college, Rebekah worked in China for three years. She returned to India and helped set up Fab Café for Fabindia. Ariella moved backed to India after graduation.

Interestingly, the idea for Atmosphere Kombucha came on Rebekah’s trip to Bali.

“While I was there, I visited a kombucha-making unit. I had been making kombucha since college, and was always drinking it. It really helped me maintain good gut health whenever I travelled. When I came back to India, I noticed there wasn’t really any kombucha brand in the market and decided to explore the space,” she explains.

She convinced Ariella to join her and the sisters started Atmosphere Kombucha in 2018.

Setting up the business from scratch was challenging.

“Designing a product in India is challenging because of the minimum order quantities. The first time we went to a bottle supplier, they refused to send us just 500 bottles saying it was a small order. Ten thousand for us at that time was a crazy number, now we order them every other week. We had to bargain and request him to give us a thousand bottles,” she says.

Without much money or experience, they worked on different processes two weeks at a time. They visited small stores, gave away free samples, and asked their friends to try their products. In the first year, Rebekah and Ariella experimented with a number of formulations to come up with ones that really worked.

Rebekah attributes pulling through due to sheer jugaad.

“We were both in our 20s living on our own in Delhi, didn’t have much money, and we did things the best way we could, with jugaad. We would talk to different people in organised retail stories to strike deals or negotiate.”

Atmosphere Kombucha products are available at Starbucks, through Blue Tokai, and on its own website. In Delhi, it is available at Food Hall and other big chains. Hotels like the Leela and Marriott, and restaurants like Mamagoto and Sly Granny stock the products.

At Shark Tank India, the Sharks expressed their concerns on the price point (a bottle of kombucha costs Rs 220).

Rebekah agrees that these are valid, but on the other hand, there are two sides to it.

“For example, one cannot say that India does not have a market for beverages above Rs 200. If you go to most cafes, the products are priced above this. If I was selling a drink for a hundred rupees in Starbucks, it would not stock our products in its cafes, because it would be way cheaper than its coffees, right? she asks.

She also points out that the Indian consumer deserves fresh food and just because there might be power issues, they can’t add preservatives in everything.

“We can come out of all these, and say it’s possible. The product is a bit expensive, but we wanted to bring something good to India that’s truly healthy,” she adds.

Also, since the episode, Rebekah has been receiving messages on the solutions to the problems the Sharks point out, especially with regard to cool supply chain and distribution.

The sisters initially invested Rs 25 lakh from their own savings and some help from their parents. They are looking to raise Rs 1 crore this month, and a larger round at the end of the year. Their current turnover is around Rs 20 lakh a month.

Atmosphere Kombucha also takes pride in an all-women workforce at its production unit in Delhi. These are a mix of food technologists and unskilled labour who were trained in different processes.

The brand has competitors like Bombucha, Toyo Kombucha, and Krishi Cress. The differentiator, she believes, is that Atmosphere Kombucha has more flavours and the focus is on taste.

“On Shark Tank India, Peyush (Bansal) said that it was as good as any other drink, and that’s our goal–to be the tastiest kombucha,” says Rebekah.

It has now expanded into pancake mix, vegan chocolate fudge, and pasta.

“When you want to grow a profitable business, a good part of it will be D2C and one of the easiest ways to do that is to have different kinds of products. Delhi has a very cold winter when no one wants cold drinks. Hence, we decided to expand,” she adds.