The decade that was: Policy fast-tracking has been the much-needed catalyst

Policy changes need to address immediate problems as well as help lay the foundation for the future. By nature, some policy changes create immediate impact while some others take longer to start showing results. You need both kinds to keep things going. While the former address gridlocks, the latter address foundation-building by laying the right foundations to avoid future gridlocks.

Transparency and ease-of-doing-business are clearly the foundation-building variety. One might wonder how these two factors could possibly give entrepreneurship a boost. Well, together, ‘transparency and ease-of-doing-business’ is the equivalent of ‘corporate culture’. Both are invisible and intangible factors that can create conditions for spontaneous combustion and in the process ignite performance. It is this intangible infrastructure on which everything else rides. This infrastructure could be creaky or smooth.

The quality of this infrastructure is so important that the World Bank ranks countries on this parameter, and many global investors make choices on investment destinations based on this rank. In 2014, India was ranked 142 by the World Bank in ease-of-doing-business. In 2017, this had improved to 100. There have been debates on the extent of improvement that is attributable to reforms that the government initiated, but there is no denying that a good chunk of the improvement is attributable to what the government has done.

Ease-of-doing-business does not mean overlooking violations of law by entrepreneurs or enterprises. It means being able to distinguish between deliberate fraud and technical violations (often arising out of different interpretations). It is a pleasure to see the government taking the right steps to enhance transparency and ease-of-doing-business.

While initiatives that enhance transparency and ease-of-doing-business result in lesser friction and conflict, these are not sufficient. To ignite and turbo-charge entrepreneurship, we needed another set of initiatives focused on clearing periodic logjams and driving simplicity in tax and compliance frameworks. Many of these are being rolled out thick and fast. 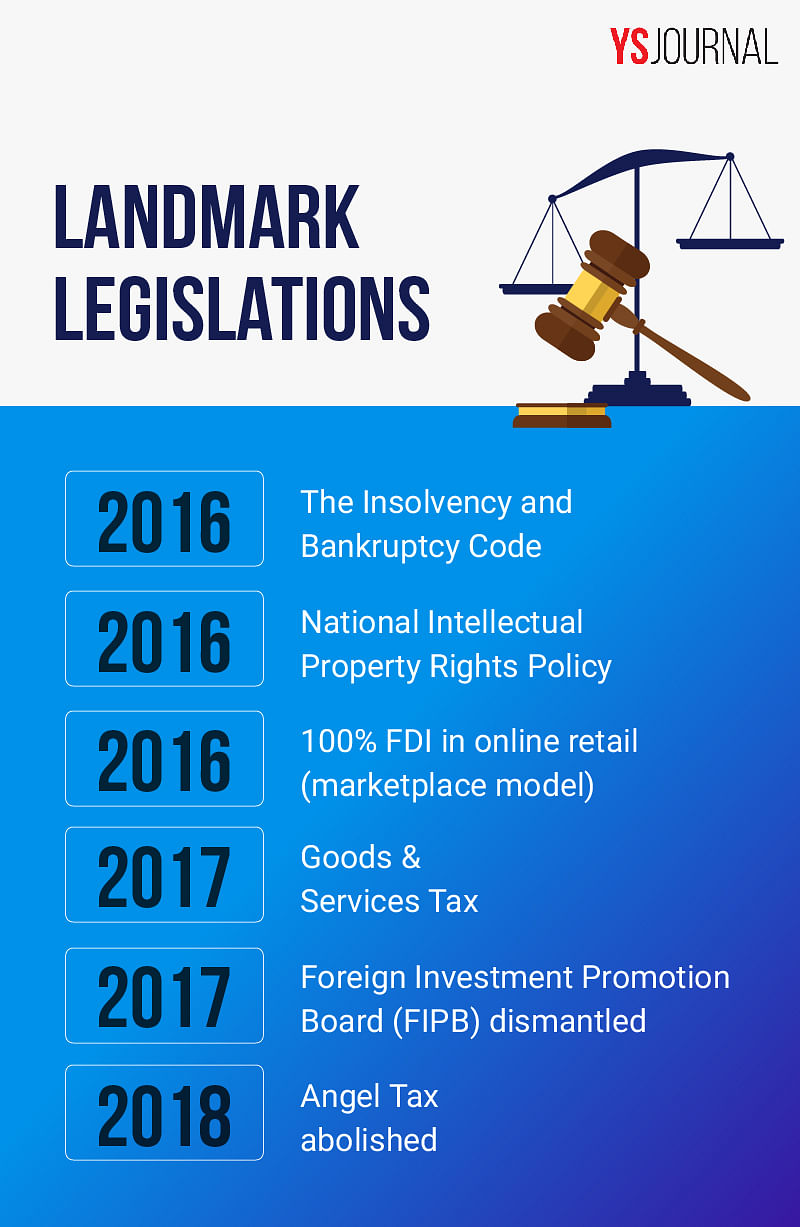 ·     A strong insolvency framework has been long overdue in India. The Insolvency and Bankruptcy Code (IBC) is expected to change all this. This is a one-stop solution for resolving insolvencies which, at present, is a long process and does not offer an economically viable arrangement. This landmark legislation can be a game-changer when it comes to stimulating economic activity. The National Company Law Tribunal (NCLT) has already begun passing orders under this legislation.

·     The dismantling of the Foreign Investment Promotion Board (FIPB) and the introduction of the National Intellectual Property Right Policy are other landmark policy changes. They are being seen positively by the international investing community and are expected to provide a fresh impetus to VC and PE investing.

·     GST is another example. It had some teething trouble, but the results have already begun to show. Many businesses were earlier constrained in terms of managing logistics. By removing geographical barriers, it has helped companies reconfigure their logistics networks to run them much more optimally. Besides positively boosting business, GST has also brought many of the smaller businesses into the tax net. The indirect taxpayer base went up by 50 percent with GST. As the screws get tightened further, this will go up. With the introduction of GST, the whole process of tracking has been automated and is now transparent.

·     100 percent FDI in online retail of goods and services under the marketplace model is now permitted through the automatic route. FDI in banking can potentially be another game changer. The norms for IPO have been made less stringent for startups and SMEs. The Union Ministry of Labour is working on the Small Factories Bill which will meet most of the expectations of startup participants. The list keeps growing.

·     In May 2018, the Centre abolished the much-hated ‘angel tax’ after months of protests by startups and issued a circular asking tax officials to refrain from coercive action to recover outstanding amounts. Income Tax Authorities (under Section 56 (2) (viib) of the Indian Income Tax Act, 1961, had demanded additional taxes from startups who had received funding from Indian resident ‘angel investors’ at a valuation higher than what can be perceived for an early-stage startup venture. This hit the volume of angel funding, a critical component of a startup ecosystem, for the better part of a year.

Startups and micro enterprises are the future of India

One of the biggest myths is that large investments create huge job opportunities. Nothing is further from the truth. As per a January 12, 2015, report in Business Standard, global and Indian companies committed to investing a total of about Rs 2 lakh crore to create more than 50,000 jobs. This works out to a cost Rs 4 crore per job! Even at Rs 1 crore per job, to create 12 million jobs per year, we would need more than $1 trillion! This is totally unviable. [Note: More than 12 million youth enter the job market every year in India.]

There is a lot of discussion about India’s youth bulge and the associated demographic dividend. Behind the positive overall narrative around the demographic dividend, several underlying pieces aren’t understood enough — pieces that are key to our promised glory. Some of these pieces are broken, while others are working reasonably well.

Entrepreneurship (including micro-entrepreneurship) has the potential to change the employment paradigm and landscape in the country if managed well. It is not that there is a dearth of entrepreneurship at the grassroots. It is just that over decades, this section of entrepreneurs has been systematically excluded from access to basic inputs like capital. The difficulty of starting and running a business has also been a deterrent. We hope that technology and micro-finance will change all this gradually.

Interestingly, even the paragons of AI and automation, the likes of Google and Amazon, which have managed to emerge as near-monopolies, have helped create a level playing field for smaller players in totally unintended and unforeseen ways. They are giving wings to aspiring craftsmen, chefs, and even small brands. Struggling artists and budding writers now have a chance to display and distribute their work at low costs. You could create your own album and put it out on YouTube and expect viewers and followers! You could write an e-book, price it at whatever you wish, and realistically hope to find a niche audience that absolutely loves what you write! You could whip up some delicious home-made food in your small kitchen and find a niche and loyal customer base without having to set up a restaurant and worry about salaries and scale.

The big callout is that startups have become mainstream in the last 10 years. While ‘unicorns’ and ‘near-unicorns’ hogged most of the limelight, a quiet revolution has been brewing behind the scenes. It is becoming increasingly clear that India’s startup ecosystem is becoming vibrant and mainstream in many ways – in terms of job creation, in terms of solving consumer problems, and in terms of creating products for the rest of the world.

For more than a decade, we’ve had a ringside view of the entrepreneurship ecosystem in India and have seen it develop and mature. While the populist media has glamourised entrepreneurship, being an entrepreneur myself, I can say with confidence – and many other entrepreneurs will share my view – that an entrepreneur’s journey is arduous and not for the fainthearted.

We grew up listening to people saying that innovation is impossible in India and everyone had their explanation – the usual suspects were the education system, insufficient investment in R&D, and so on. But things have changed. Innovation is a matter of culture and culture takes time to change. We can see this change all around us now. Determined new-age entrepreneurs are attempting to solve problems that the likes of Google or Amazon are hesitant to. Natural language programming (NLP), voice-to-text transcription in multiple Indian languages, image processing, and AI applications are just some examples.

What will drive success in the coming decade?

Here are what we believe will determine success in the startup ecosystem in the coming decade:

2. Diversity in funding: A diverse group of venture capitalists who are close to Indian problems. Those who can travel to smaller towns to spot opportunities and meet ordinary entrepreneurs in non-descript and dingy places

4. Corporate participation: Indian corporations finally acquiring an appetite to make bets on innovation and deeply engaging with startups by either creating their own incubators and accelerators, or making strategic investments in startups that can give them a continued edge.

5. Indian LPs: Beyond angel investing and Indians managing funds from limited partners abroad, a new breed of home-grown LPs will go a long way in successfully solving for India

We have no doubt that future business historians will refer to this decade as a watershed one for entrepreneurship in India!

Return to Part 1: How India’s startup landscape has evolved

Return to Part 2: The story of VC investing in India