The Tale of a Forced Entrepreneur 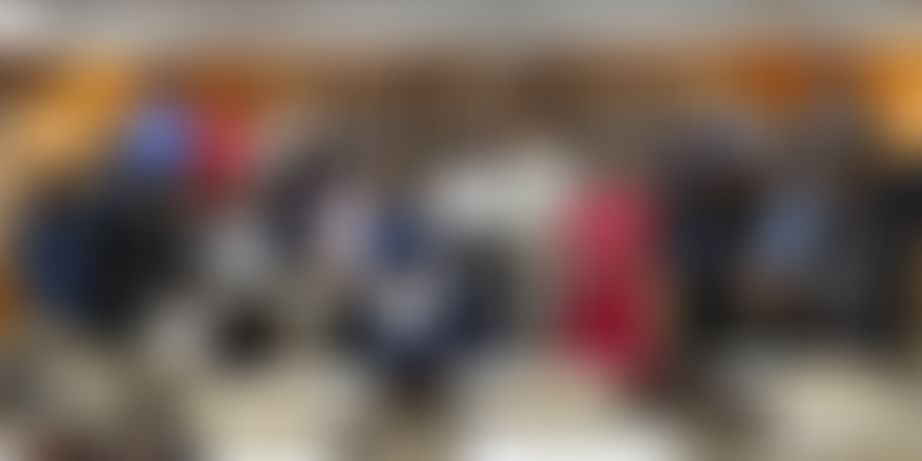 You know a very interesting thing about most of the business families(specially Marwari & Gujrathi) engaged in Traditional Trading. They are very very particular about the careers of their Children(read sons). It has to be the family business. Even if it is not that, it has to be something which allows the child to stay with the family.

Satyam Khandelwal found himself in a similar situation. After completing his MBA from IMT Ghaziabad in 2012, he joined Godfrey Phillips India in the Corporate Strategy Division. Being from a family which was engaged in traditional trading in Bhilai (Chhattisgarh), Satyam had his own impressions about the ways in which business was done. As soon as he started with his Corporate life, he immediately fell in love with every single aspect of it. The brand launches, Planning processes, efficiently directed KRAs, midnight meetings and what not. He found in himself the absolute corporate fit.

This was the time when the pressure from the family started making its way in his mind. The family was very particular of him leaving the corporate job and coming back to work and live with them. By then, he has had several heated discussions. Discussions which involved phrases like "apna kaam chhod ke, dusre ki naukri kr raha hai"   and "bahut dekhe naukri waale, apna kaam apna hota hai".

He somehow managed to continue his corporate stint till late 2014, when he finally bowed down to the family pressure and left his job to join his family business based in Bhilai. The initial few months of which, were really really tough. He could not seem to go around with the culture, which he left years back. Somehow, he continued.

It is often said that, sometimes, the things we do as a part of recreation bring the most important changes in us. During his PG at IMT G, as well as during his corporate stint, Satyam had explored a passion of mentoring in himself. He did visit a few institutes as a Guest Lecturer on Weekends, delivering short training sessions on areas like Business Communication, Soft Skills, Team Work, etc.

After completing the initial struggling phase of settling in his home town, he found himself inclining more towards his passion. While managing his family business, Satyam Khandelwal continued his passion of delivering training sessions to students & Corporates on various management modules. He started with a few educational institutes & SMEs, but owing to his relevant corporate exposure and ability to connect to the trainees , Satyam Khandelwal started receiving invitations for undertaking sessions in prestigious institutes across Chhattisgarh & Pune.

In the process of conducting these sessions, Satyam Khandelwal realized that here is a huge requirement/potential of corporate oriented trainings in educational institutes, specially at the undergraduate level.

"Most of the companies sight ‘low corporate orientation’ as the reason to avoid hiring the commerce & management Graduates. Right kind of corporate training/projects might be the key to make the graduates more employable", he points.

It would be wrong to say that there is a dearth of Training Agencies in India. There are many. Still the purpose is not solved. After an extensive research, several shortcomings were sighted.

Since these training companies incur heavy operational costs, the training modules are highly priced and thus affordability is an issue. For example, a training module on Soft Skills of a duration of 7 hours is priced as high as INR 3000 per student.

The trainers are mostly of an age group of 35-45 yrs which makes it difficult for students to connect. Also, the content of the sessions is highly theoretical which defeats the very purpose of corporate training. Moreover, there is a lack of quality trainers ,i.e., corporate executives with relevant industry exposure, at affordable cost.

Satyam realized that he had his Focus Market, the USP, and the Resources with him. He found himself reconnected to the corporate life he once had.

The idea was clear. To create a pool of corporate experts who can train/guide/mentor the students at UG institutes for better corporate orientation. And all these, at a very affordable cost.After brainstorming with his colleagues, Satyam Khandelwal boiled down on the following model.

To build a team of young corporate managers who are the alumni of premier B schools and are currently placed in companies at Managerial positions. These managers should possess a passion for mentoring the younger selves. They will be supplied to institutes for Guest lectures, Workshops, Panel discussions and other Corporate interactions. There shall be a core team which will be responsible to developing the content of the modules and floating it among the respective managers/mentors. The mentors shall have the liberty to modify the content & the mode of delivery, as per their expertise. With salaried managers working as mentors , the cost to students can be significantly reduced. These mentors shall be paid a fixed amount per session out of the revenue generated from students/institute.

With this model in mind, Satyam Khandelwal founded Quest Consulting Hub in April 2016. Pune & Raipur were selected as the pilot markets. Networking being one of his strength, Satyam had a smooth start. In the first month, there were 20 corporate managers who were working as Trainers/mentors for Quest Consulting Hub. Today , the company boasts of 80 very dynamic and qualified mentors who are undertaking sessions at institutes as well as mentoring students through projects independent of institutes. All this at a cost which is 60-70 % less than the fee of a conventional training session. The Client list of QCH has names like Symbiosis, BMCC, ISB&M in Pune and ICAI & IIM in Raipur. QCH also organized a few open sessions on a few Management Modules which received great response from students.

Satyam now wants to take QCH to new heights. He is willing & excited to accept challenges that come his way. He is also associated as a Mentor with Start-up Chhattisgarh - an initiative by CG Government to promote Entrepreneurship in the state. He is also an established Career Counselor and visits prestigious schools for workshops. His name features in the list of Star Budding Entrepreneur from IMT Ghaziabad. He has also received the title of "Emerging Education Icon of India" by New Press Media Mumbai.

He is thankful today to his family for forcing him to leave his job as because of that, he could taste the sweet fruit of entrepreneurship. QCH is nearing a revenue of INR 20 lacs for FY26-17 and eyeing a growth of 200% for FY17-18.

And yes,, the family.. they are very happy with the achievements sometimes.. but there are times when they say... "Hamare kaam me kya burayi thi".... :-D

PS: This is the story of me .. covered by me... I wanted to save my self from the embarrassment of asking someone else to cover my story.. :p :p 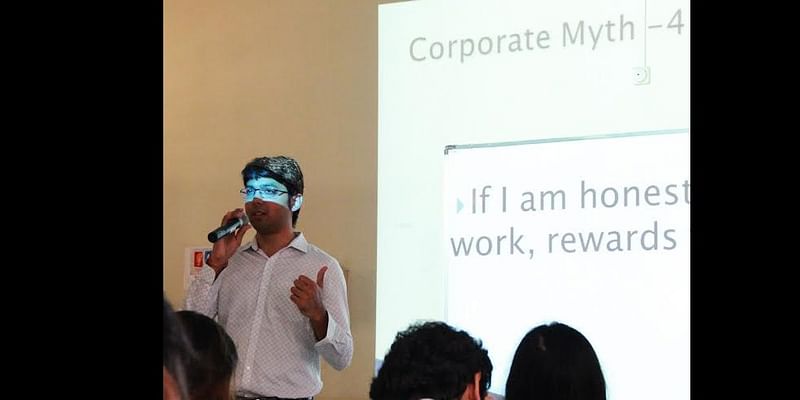 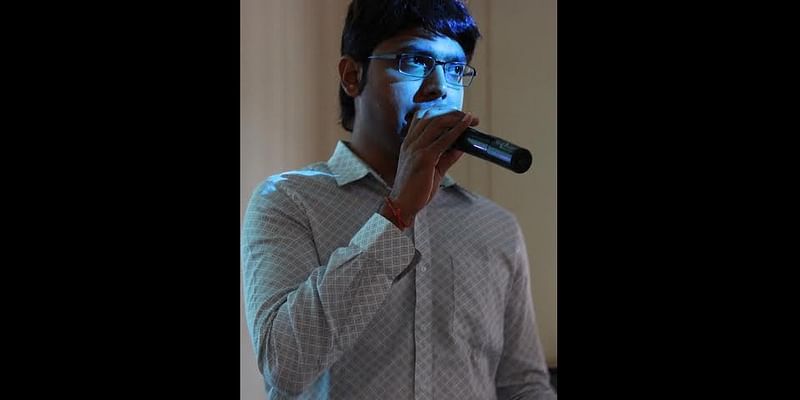 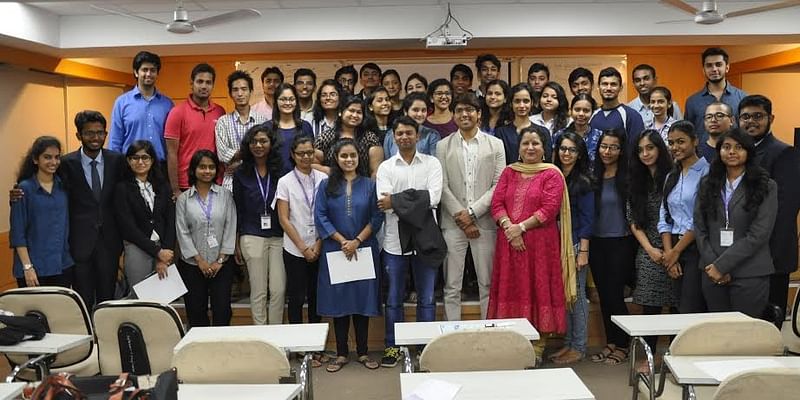