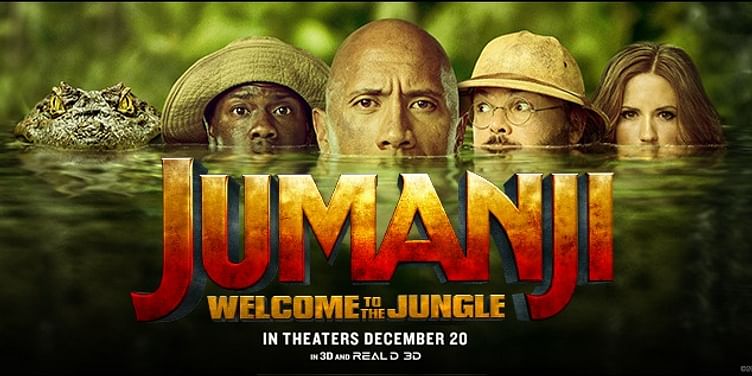 Hollywood does not cease to surprise us. Just as Life and its vagaries. And, if the approximate USD 500 million and above opening weekend box collections of Jumanji is anything to go by, the philosophy that ‘life is but a game’ appears to be the theme which people have begun to take interest in.

There are three simple reasons that back this life is a big game theory. Firstly, games challenge us. And, we love to feel a sense of challenge. Being challenged ushers the element of ‘purpose.’ Secondly, we live life by a set of rules. Don’t games have rules too? Thirdly and most importantly, the purpose of living, as profound as it sounds, is not about winning or losing – it is all about the journey. So are all the memorable games we have played. They become memorable because we were involved in them and we enjoyed the playing experience, the result did not matter.

“A game for those who seek to find a way to leave their world behind”. An interesting line from this latest Hollywood flick is a testament to our love for games. Or, is it another way of making our own Game of Life a winning one?

In the film one gets to watch daunting challenges. What makes for an interesting thought is the way each player is pushed to wear on a new attitude and demeanor, of course, notwithstanding the dramatic physical makeovers that we get to witness. More than the physical makeovers, the new attitude becomes the solution to the challenge. The realization that the challenges are the essence of the game, brings out the best in the characters of the game. For instance, the transformation of the nerdy hero to the muscular explorer Dr Bravestone (portrayed by none other than WWE famed ‘Rock’) catches one’s imagination not so much for the physical transition as much as it is the attitudinal one. As in the real world, while challenges bring out the best in each of us, it also comes with its share of those ‘avoidable moments of self-doubt’. Rightly, the film has its share too- unexpected moments from this hunk- of- a- hulk protagonist doubting himself. The doubts of whether the lead lady likes him because of his brawny looks (which is a stark contrast to his real nerdy self) and the immediate sense of relief apparent in his face as she admits that she is ‘into nerds.’ The moment of hesitation of giving-up the new found ‘hero’ and ringleader image and being pulled back into the real world, are glimpses of real life hesitations and doubts that real-life challenges throw at us. However, another reality of life’s challenges –the players make all the difference! The moments of acceptance, of friendships and of courage are those that make life likable and Jumanji likable too.

Play By the Rules

One undisputable fact remains that all games are based on rules. Life is also based on rules- a series of logical rules that bring ease to living. The most important rule is the rule of cause and effect. While many attribute: luck, circumstance and destiny as guiding life, it is the rule of cause and effect at play. In terms of living, once we can take a close look of what is causing our experience in life, we are able to change it for the better. Understanding the simple mechanics of the game, makes one master it.

The film corroborates this. A little into the game, the players realize that they need to play the game by its rules. The easy levels need to be solved to reach the final one. The three lives, the tougher levels all need to be played by the rules.

Finally, the wonderful journey called life. Life is all about the journey and not the destination. It’s the experience that enriches us. It is this experience of playing that makes the journey engaging, imaginative and enriching. To drive this point harder, the best games ever played are those that deeply absorbed you into it and winning or losing did not matter.

Every game has a goal. For a crossword puzzle it is to fill all the boxes, for scrabble to make as many high -scoring words and for chess its checkmate. This goal directs the actions, so games are not foolishly played (just for the gaming experience). The film, to some extent, appears to reflect this thought. All the players have a definite goal. The characters have their strengths and weaknesses which aid, direct and influence their actions. The unexpected turns and twists, the pain and fun of the game make the game worthwhile. Added to this, the support of friends makes the journey worthwhile.

Thank you, Jumanji for being another simile to a game called Life.