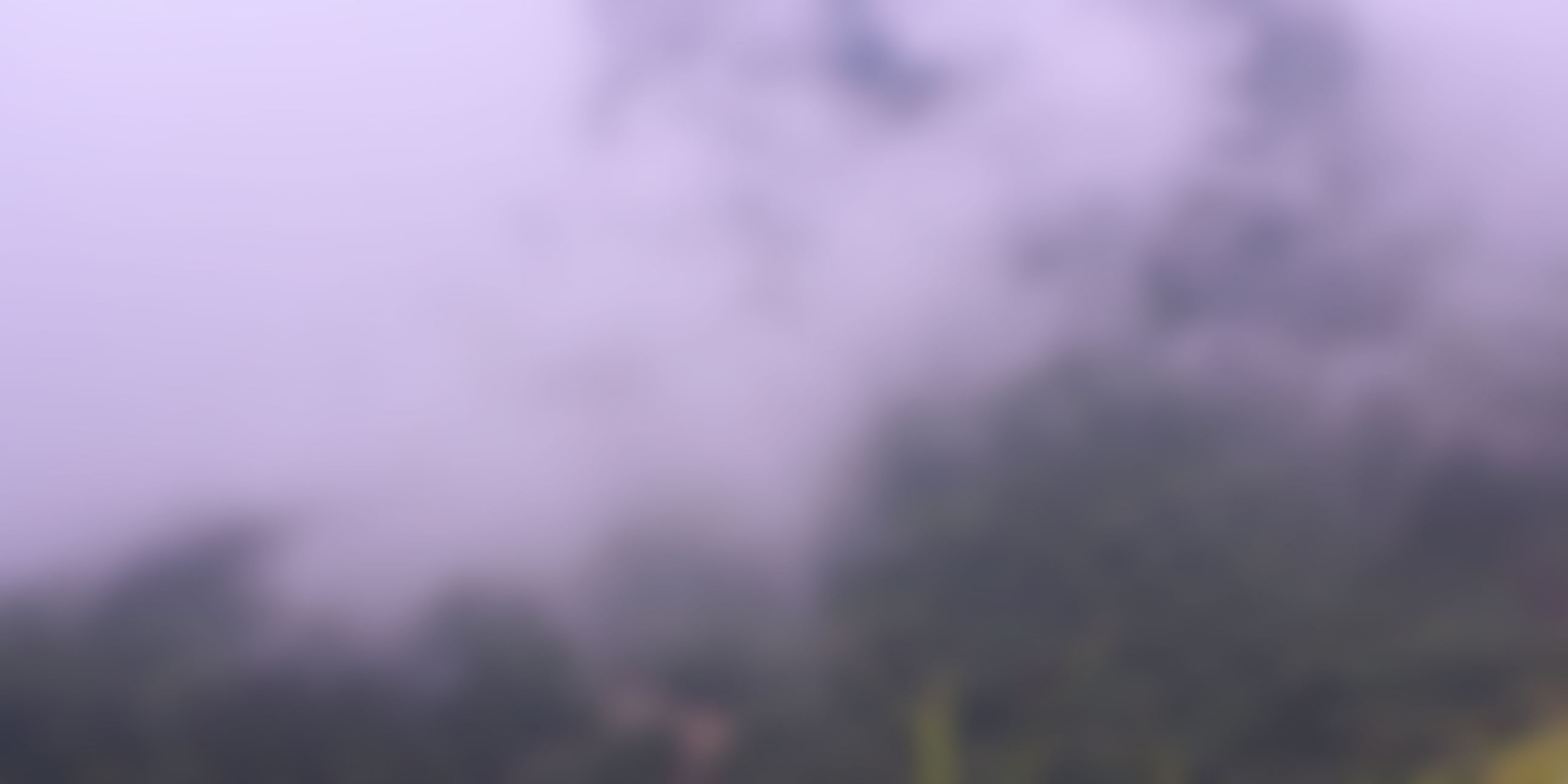 After a day spent at Guwahati, I rushed to Paltan Bazar from where I would get a shared taxi to Shillong or a bus. The bus have limited service in a day so i din’t have hope to get one, but to my luck Meghalaya government service bus waiting to get maximum passengers for the trip. I got a seat and other seats were taken by others by putting their hankies and bags on there. I needed to wait for a while for the bus to start. Once driver got into the seat, all those owners of bags and hankies got on board and took their saved seats.

Finally getting away from the hot weather of Assam, we slowly started climbing up the hills of Meghalaya. It was the beginning of Monsoon and it welcomed us with a drizzle. Till 3 km away from Shillong everything was fine but suddenly due to the rain we got stuck in traffic a bit away from Shillong. It was getting dark and I needed to book next day outing with the Meghalaya Tourism development centre. When we were stuck for more than 30 minutes, I Googled to find MTDC number and called them to hold a seat for tomorrow and will pay the moment I join. Although, thankfully, they are open till 8PM. The lady still promised that they would hold the seat. 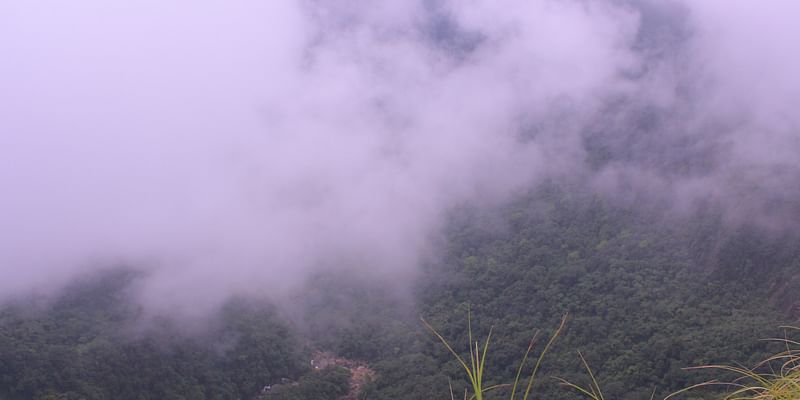 Soon I get down at Centre point at Shillong, the first thing was to check with MTDC for my seat and close the payment. with My stay at Shillong was not confirmed and Team AAO was trying to find a place for me. Along with their update and my Googling and checking directly at hotels I found a place close to central point, a common bath facility in very cheap but good place.

After dinner, there was nothing much to do but get good sleep before starting another eventful day.

8:30AM was the reporting time at MTDC and like me many other was waiting at their door and they were few minutes late to open the office. By 9:00AM the bus started with 20 travellers and my seat was quite back to the bus as I was little late in booking it. Our guide was a lady; she came in and announced where we were going first.

First destination was Duwan Sing Syiem Bridge from where we can see the sunset and sunrise but we were not that lucky to see the sun in the mist and off course sun was already up. But still the view around the valley was beautiful. 15 minutes was the time allowed there and when the bus was about to start. 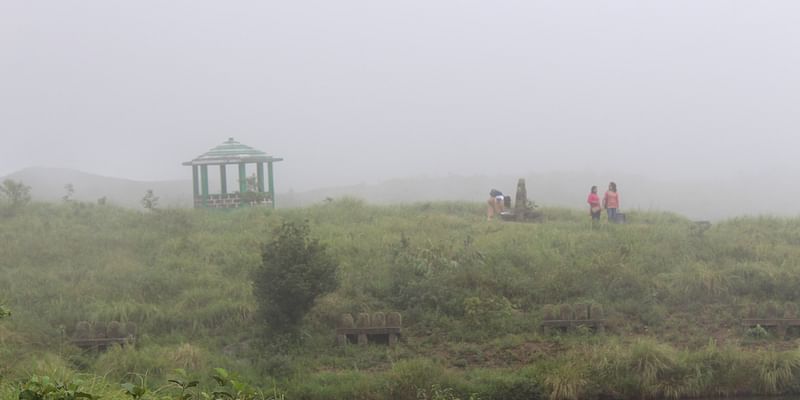 After an hour’s journey we ended up at Eco Park. From where the famous seven sister falls starts. There was a lot of mist when we get into the park. The entry fee was 20rs per head was the payment which we should pay ourselves. The attraction of the park was the missing falls. The water flowing through a small canal is disappearing to a well which was closed by the authority with iron mesh. We couldn’t see and outlet to the water and the well doesn’t overflowing, maybe that’s the reason it called “Missing” falls. When the mist cleared we got a view of falls and it was beautiful. 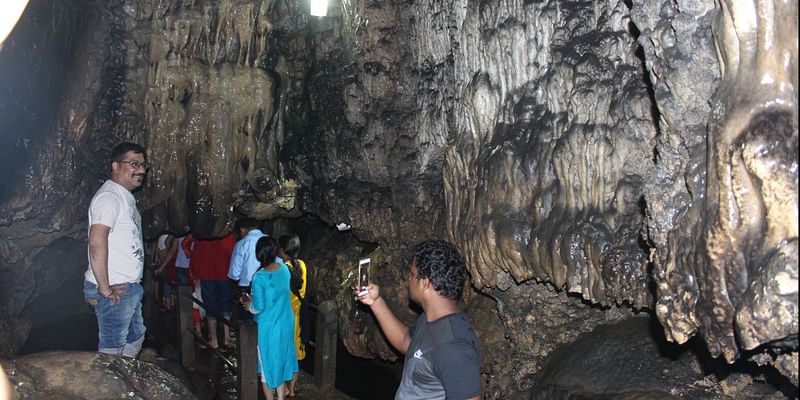 Here everyone kept the time of 30 minutes and were on time when the bus headed to Mawsmai caves. Our Guide told us we needed to remove our shoes to go through the caves as there may be water up to knee. So we were in a hurry take our shoes and socks off.

During that I met Sachin from Mumbai and Akshay from Delhi. Both were doing a Solo trip and Akshay was to return tomorrow. Meanwhile Sachin and I planned our next day together. They walked bit faster to the entrance of Cave but I was still in a confusion if I wanted to get in or not. As I am generally a bit scared when it is dark. But I still wanted to give it a try. The entrance was muddy and watery. There was a heavy smells of limestone. The crowd was moving in queue and it was not as scary as I expected it to be but was quiet interesting.

After the caves we headed to the lowest part of Chirapunji. We went to the famous Ka Khoh Ramhah rock there. It looked like a basket on the rock and alongside it there was a small waterfall. 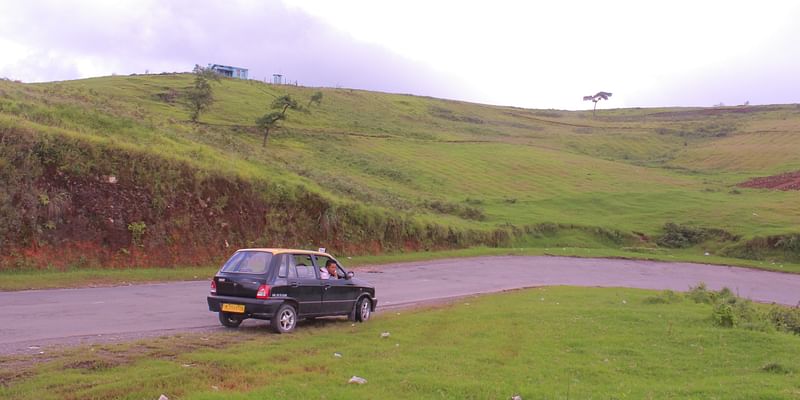 The most interesting thing about Ka Khoh Ramhah was, from there, we could see the water bodies that flowed in Bangladesh. Mist blocked our view but still everyone was excited to see the neighbouring country.

Next we stopped at Thangkharang Park. From the park we were said Kynrem falls can be seen but unfortunately due to the mist pour view of the falls was blocked. The park is blessed with greenery and serenity. We can spend long hours there watching the valley and it offers homemade food in stalls outside. 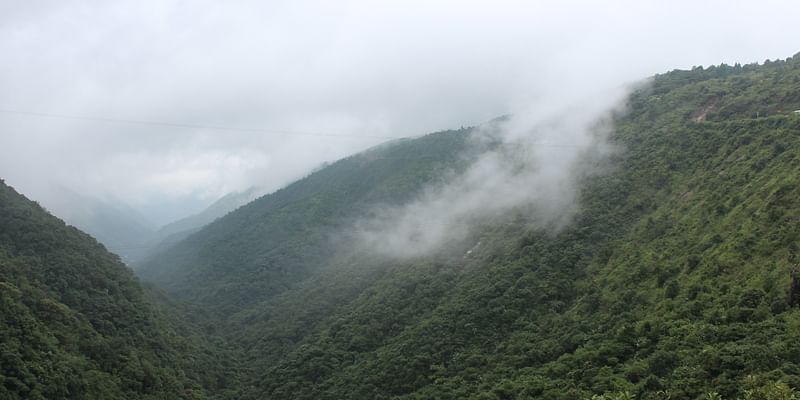 And it was true. There was a balcony outside the hotel and from there the view was breathtaking. Those who came first got the best view of falls, later as usual mist covered our view. We got more than an hour there and it was hard to take our eyes off the falls whenever the mist cleared.

It was late when we got back to Shillong. Akshay was in search of a Hotel and promised to meet next day at Centre point. We got a new place from the person we met at falls. Laitlum- it was where Rock on-2 movie was shot. I haven’t seen the movie but after a lot of Googling found the place with images. It seemed interesting.

Next day 9AM sharp met Akshay at Centre point. He went to bargain with taxi drivers and at the end we got one for Rs 800. It was drizzling when we reached Laitlum and the view was misty. As we started walking closer to the peak, the mist slightly gave way showing us the valley below. It was beautiful and the wet grass can be deceptive, if you slip down, there are no rails or stones to stop you. You will directly fall to the valley. But still people seem careless and unlike the other destinations we had been to, it was not crowded. People from the nearby homes were selling tea and boiled egg.

Taxi driver was allowed 1 hour for us and it was not enough to wait for a better view of valley and later it started raining and we returned back to taxi. 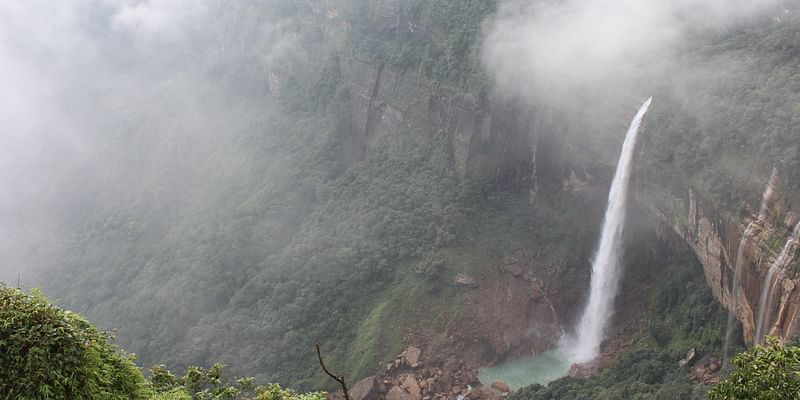 Akshay had some other plans for the day and as for me, it was the time to pack my bags to go back home. With a promise to keep in touch, we said bye. But those who are planning to visit Meghalaya please visit during Monsoon because as we learned Cherapunji is the wettest land and the beauty of it can be seen in this season.

An easy option to explore Meghalaya

Near the bus stand there is an MTDC counter. They have daily tours for Dawki, Cherapunji, Mawlynnong and local sightseeing. Ticket rates per head are 300-500. For my Cherapunji trip, I spent 350.

If you want to experience flying from Shilling to Guwathti, there is Helicopter service which can cost you around 1500 rs is available. The booking office is near the bus stand. In 30 minutes or so you can reach Guwahti from Shillong.