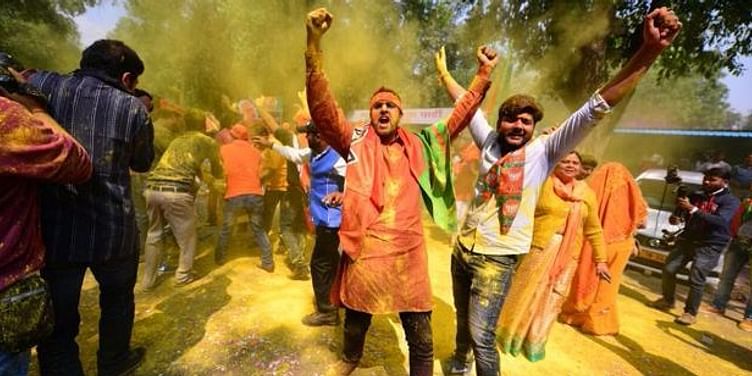 The results of Uttar Pradesh, Uttarakhand, Goa, Punjab and Manipur Assembly Elections are finally out! The Bharatiya Janata Party won in two major states - Uttar Pradesh and Uttarakhand. And after 10-long years, Congress won in Punjab. While no party has showcased majority in Manipur and Goa.

The saffron party is set to from the government in Uttar Pradesh and Uttarakhand. It has won 324 seats among the total of 403 in Uttar Pradesh. The Congress-Samajwadi alliance won 54 Assembly seats and Bahujan Samaj Party managed to win 19 seats and other parties won 6 seats in the state.

Meanwhile in Uttarakhand, in a total of 70 seats, BJP took 57 seats and won the elections. The Congress party won 7 seats and other parties claimed 2 seats in the state. As far as Punjab is concerned, Congress won 77 Assembly seats among 117 seats and the next comes the Aam Aadmi Party with 20 seats. BJP came in third place by winning just 18 seats and other parties won 2 seats in the state. It is notable that the Congress is going to set the government after a decade.

However, none of the parties showed majority in Manipur and Goa. Congress won 28 out of 60 Assembly seats and BJP won by 21 seats. While two of its regional parties - Naga People's Front and National People's Party - won 4 seats each. Rest of the 3 seats goes to other independent parties. According to the sources, Naga People's Front party would extend their support to any other parties except Congress.

As like Manipur, Goa have also got no clear verdict of the elections. While Congress got 17 seats, BJP got 13 seats. The Nationalist Congress Party ensured its seat with one win, the Goa Formation party and the Maharashtrawadi Gomantak Party won 3 seats each. And other independent parties won 3 seats in the coastal state.

The results came with the shocking surprise that despite people criticising many of Modi's policies including demonetisation, his party ensured with decent or even 'more-than' expected victory. The regional news portal, Vikatan, have been criticising his government with keen analysis and data journalism. I have also found one such piece about BJP's recent triumph in Assembly elections.

The BJP leaders are always known for their unique tactics during election seasons. It is the same strategy they used in winning the elections in Uttar Pradesh.

Uttar Pradesh can be called as Mini-India. It is said that if any party wins in this state, they are more eligible to form the Central government. In 1991, the saffron party won the elections by promising people that they would build Ram temple. At that time, Kalyan Singh became the Chief Minister of the state. However, after the demolition of Babri Masjid, they lost in the next elections. In 1997, BJP repeated the same campaign of building Ram Temple. However, it didn't show majority and made alliance with Mayawati's party. Due to the differences on sharing the seats raised between two parties, BJP failed to form the government at that time.

After Gothra train incident and various allegations of being 'Hindutva', BJP almost lost people's trust in UP and after 2002, only regional parties were winning elections in a switch mode. Mayawati's Bahujan Samaj Party and Mulayam Sing Yadav's Samajwadi Party become the very possible options in the state.

BJP could not make any big impact in Uttar Pradesh elections from 1997 to 2014. They were very firm in winning 2014 Lok Sabha Elections in the state. Kesav Prasad Mourya became BJP's state president in the year 2014 and he has played crucial role in winning the 2014 elections as well as the recent one. There are much possibility that he would become the Chief Minister now. Along with BJP's national president Amit Shah, he made different level of strategies to take the party towards victory. Their first plan is to spilt Samajwadi Party's Yadav votes. They succeeded in splitting Mulayam Singh Yadav's family . Mulayam Singh Yadav's brother Shivpal Yadav turned against Mulayam Singh's son Akhilesh Yadav. Even though they managed to show togetherness during election campaigns, Shivpal camp did all the ground works to dump AkhileshYadav's group. This become major advantage for the BJP party to enter into the state with fresh note.

Also, they highly depended on the votes they get from castes. They placed each candidates only after carefully analysing the major castes in each seats. This strategy worked out well for their party in recent elections. It seems like the BJP moved from its 'Hindutva' campaign to caste voting. Meanwhile, the news website largely covered the reactions of other states over the Five State election results which declares huge disappointment across the nation!

How to Set Up a Credit Rating Agency and How It Operates?