By Success Guru AK Mishra|11th May 2018
In, this article we will guide you through effective tips for Maps/Atlas preparation

Civil Services Prelims Exam 2018 is scheduled to be held on June 3rd, 2018, which is now less than a month away. Most of you must have completed all the static and the dynamic part of the syllabus and this should be the revision phase, for all that you have studied until now. The Static syllabus of Geography can be studied and remembered but the maps section needs pure practice to recall the geographical aspects perfectly. In, this article we will guide you through effective tips for Maps/Atlas preparation.

Must have: Oxford Student Atlas

Well, you read that right. Your maps practice is incomplete without the Oxford Atlas, as it is one of the most accurate & detailed Atlas with a decent colour contrast for easy reading of the various geographical aspects. Oxford Student Atlas is the best choice to prepare the maps from and stay in close accord with the UPSC pattern. 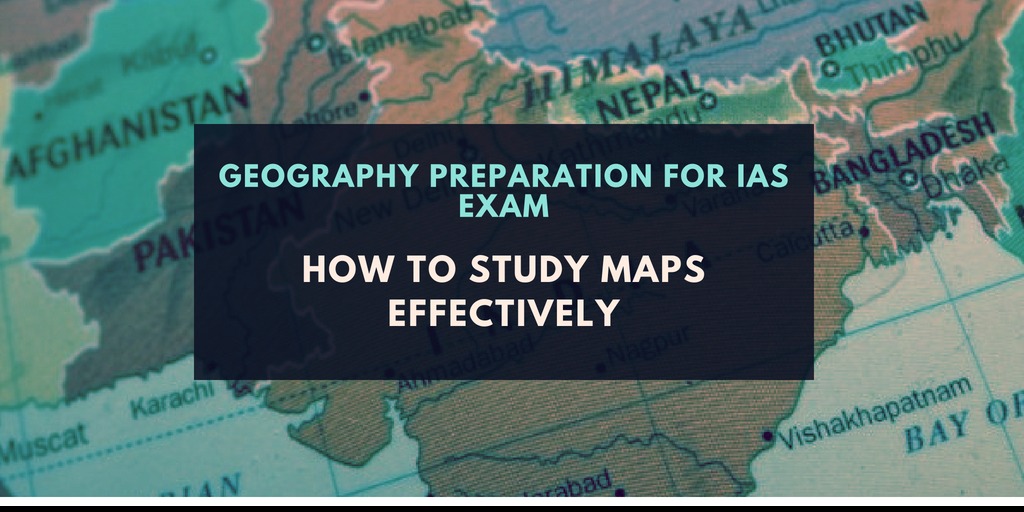 Also, do not forget to get the right and concise study material to cover the subject well.

Moving further, In the Political Map of India, focus on:

1. 29 States (along with their capital cities), 7 union territories and the major cities in India.

2. Neighbouring States and countries (especially International Borders), the coastal areas and the areas surrounding Tropic of Cancer (names of the 8 states through which the Tropic of Cancer passes, i.e. Rajasthan, Gujarat, Chhattisgarh, Madhya Pradesh, Tripura, Mizoram, West Bengal and Jharkhand).

3. Study about things like the state that borders the maximum number of states, like U.P., M.P., etc.

4. The Chronological order of states as per the directions like the north-south arrangement of north-eastern states of India, or the major cities from North to South or East to West.

5. Cities that lie on the major river banks along with the states these rivers pass through.

Please Note: To read these points effectively, you must first solve previous year papers for past 3-5 years, so that you have an idea of how questions are framed for the dynamic part of the subject. This way, while studying about the states, you will remember to study the bordering states and why they are important or how could that be asked in the exam. Questions could be framed like ‘Which among Assam, Sikkim, West Bengal, and Meghalaya does not border Bangladesh’? or ‘which Indian states share borders with Bangladesh’ or the question could be clubbed with current issues like ‘what is the Rohingyas issue and what states are involved along with their neighbouring nation, they share their borders with?’. You can frame more variations for the topic.

In the Physical Map of India, focus on:

1. Major Rivers, famous lakes, oceans bordering Indian coastline, and other water bodies that you must know, as per UPSC Syllabus.

3. Different soils found in the various geographical boundaries of India.

4. Plains & the desert areas and the islands under the Indian geography.

5. The green cover of India like the forests, National parks, etc.

6. Major roads & the highways and the cities/states they pass through.

Please Note: Physical maps are a little more complex to prepare as they involve the actual geography of our nation and it totals to a lot to remember, like rivers, mountains & plateaus, etc. See geographical location of the middle Indian plateaus and the mountain ranges falling in the area or in the southern peninsula. For typical names that are hard to memorise, we will suggest you to form your own acronyms/short forms to remember the names of the mountain ranges.

1. India is a land of mountains, and you will have to remember a lot of names. Hence it is advised to study the mountains and the ranges in reference to the geographical locations of the same, like the mountains in northern India or in the southern peninsula. You can also move ahead using directions starting off from north to the central and then the southern part concluding with the peninsular region.

4. Mountain passes and the states they are located are extremely crucial, like Nathu la pass, etc.

1. Important rivers like Ganga, Yamuna, Kaveri, Etc., along with their origins, states located, tributaries and where they meet other rivers & seas.

2. The chronological order of the rivers as per their location and origination.

4. Major Rivers of the States and their chronological order. Also, focus on the major Dams & lakes and the rivers they are located onto.

5. Different names of a river depending upon the location it flows through. For example, River Brahmaputra originates from the freshwater lake Mansarovar in the Himalayas and flows through Tibet where the locals call it Tsangpo, i.e. pronounced as Sangpo; before entering our beautiful Nation India in the state of Arunachal Pradesh, where locals call it by the name of Dihang, continuing to flow through Assam & Bangladesh, where it is known as Jamuna before finally meeting into the Bay of Bengal.

1. All the Indian cities located on the coastal lines along with the states they fall into.

2. Indian Islands like The Andaman & Nicobar Islands, their chronological positioning, and the important geographical aspects like the Volcanoes in the Barren islands, etc.

Questions are framed like (the following question was asked in the Prelims Question Paper of CSE 2014):

Q. Which one of the following pairs of islands are separated from each other by the ‘Ten Degree Channel’?

A. Andaman and Nicobar

B. Nicobar and Sumatra

Which of the above pairs are correctly matched?

1. India has a wide range of Natural Parks, Wildlife Sanctuaries and bio-reserves. You must know all the locations of all these parks in India. At least know the major ones.

2. Focus on the major states with the largest parks or famous ones along with their natural setting and inhabitants.

1. Read about all the major roads & highways in India. Especially about the top 10 NH’s along with some of the important ones like NH 31, 223, etc.

2. Learn about the longest highway i.e. NH 7, and the cities/states it passes through along with the start-end point of the same.

4. Read about cities where most NH’s meet like Nagpur where 3 National Highways meet.

5. You can learn about important cities and states along with their geographical positioning with the help of these NH’s.

There is a lot about the World Geography which can be learned only with a curious mind. So, prepare yourself for a virtual journey of the world and get onto studying your maps, right away!