Evolution of the Internet and throwback pictures from the ARPANET Era

When I came across throwback pictures of some great Internet-based companies we have today and that of now defunct Internet businesses, something fascinated me. The Internet has really evolved, some companies were able to swim, while some had to sink.

This best summarizes evolution of the Internet, which was originally called ARPANET.

As evolution of the Internet has taken the world by storm, we have witnessed the rise and fall of many Internet-related companies. Some leave us with us sweet memories, some leave us with nostalgia.

Evolution of the internet together with the platforms that are impacting us heavily today confirms that change is compulsory. Businesses are like humans in this regards, you evolve and grow or you rest in whatever!

whitehouse.gov was Launched in 1994.

David Plouffe, on September 1, 2011, announced in an email that the White House is releasing "We the People" to allow public petitions on whitehouse.gov. The launch of the petitioning platform was announced by Katelyn Sabochik September 22, 2011 in a White House blog post’, according to Wikipedia.

I love a particular story about the whitehouse.gov initiative. It was the letter written by Little Miss Flint to President Obama. Miss Flint was an 8yr old resident of Flint where they were having serious issues with public health.

Little Miss Flint wrote to the White House to voice the hardship her fellow Flint residents were going through. Ex-President Barrack Obama replied her message himself, not that he just acknowledge it. 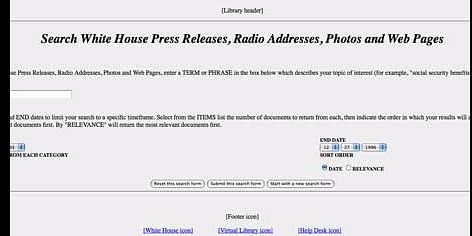 whitehouse.gov is redesigned to suit every new administration in the country. It has evolved from a portal to merely search for government Press Releases, Radio Addresses, and Photos.

whitehouse.gov is now a robust information resource where you could have access to general American history information, current news pertaining to the President, press briefings, proclamations, executive orders, and any speeches the president has made on the radio.

BBC Online Was Launched in 1997

The BBC has had an online presence supporting BBC TV, radio programs and web-only initiatives since 1994, but did not launch officially until December 1997.

Bbc.co.uk became the third medium after existing TV and radio networks as it was launched in December 1997.

It had this to say “there was clear public value in moving BBC Three online, as independent evidence shows younger audiences are watching more online and watching less linear TV".

BBC as a broadcasting warlord identified online content as a potent way to catch the attention of young fellas via BBC iPlayer and Youtube channel. This is yet another enterprise that did not sleep on evolution of the Internet.

Evan Williams, Noah Glass, Jack Dorsey, Biz Stone brought us that game-changer which taught us how to make personal and business confessions in just 140 characters.

Twitter was founded, on March 21, 2006 at San Francisco, California, United States, Twitter is the only bird I ever see that doesn’t fly. (winks)

One of Twitter's ground-breaking feat was beating traditional media to sharing the first photo from US Airways plane crash in NYC’s Hudson River in January 2009.

The hashtag (#), was first proposed by a Twitter user Chris Messina. It later debut on Twitter on August 2007.

Craigslist Was Launched in 1995

Craigslist became a web-based service in 1996 and expanded into other classified categories. It started expanding to other U.S. cities in 2000, and now covers 70 countries.

CL, as it is later known, is a classified ads website with sections devoted to jobs, housing, personals, for sale, items wanted, services, community, gigs, résumés, and discussion forums. It was incorporated in 1999.

Craigslist was no moderated when it started, so Newmark was surprised when people started using the mailing list for non-event postings.

The Ochs-Sulzberger family has controlled New York Times Company since 1896. For years, NYT was nicknamed the Gray Lady.

The launch of nytimes.com has contributed immensely to evolution traditional journalism worldwide. Nytimes.com came online in 1996 and has been ranked one of the top websites.

As an Internet giant that has followed through with evolution of the Internet, NYT, did not stop at the introduction of nytimes.com. The Times Reader came as a digital version of The New York Times.

The Times Reader was created via a collaboration between the newspaper and Microsoft. It was announced in Seattle in April 2006 by Arthur Ochs Sulzberger Jr., Bill Gates, and Tom Bodkin.

Flickr emerged from tools originally created for Ludicorp's Game Neverending, a web-based massively multiplayer online game. It was launched in February 2004 by Ludicorp which was owned by Stewart Butterfield and Caterina Fake.

In less than two years, the photo-sharing site -- now owned by Internet giant Yahoo! -- has turned into one of the Web's fastest-growing properties -slashdot.org

The platform that would later become Blogger was started by Evan Williams and Meg Hourihan in 1999 at Pyra Labs. Blogger arguably brought blogging to the mainstream globally.

But before Blogger, it was generally recognized that the first blog was Links.net. Links.net was created by Justin Hall, when he was a Swarthmore College student in 1994.

According to a list compiled by Jesse James Garrett, there were 23 blogs on the internet by 1999. But, by mid-2006, there were 50 million blogs according to Technorati‘s State of the Blogosphere report.

In 2003, Google, the world's most-used internet search engine, announced the acquisition of Blogger, a web service which had fueled the rapid rise of the web journals popularly known as weblogs.

The most important lesson I learnt from evolution of the Internet is; It is good to stay focused, it is great to plan ahead, it is awesome to keep the vision you started out with, but, nothing is as good as being flexible enough to evolve and get better quickly.

For more throwback pictures of the early ARPANET/Internet era, read up here: Evolution of the Internet Twitter, Flickr, BBC Online and Funny Throwback Stories of How They Started