One of my favourite and a fast developing beach town of India, Mahabalipuram is a land of conquerors, explorers and peace seekers. Being listed under a UNESCO World Heritage Site, Mahabalipuram or Mamallapuram (locally known as) receives visitors from all over the globe. It whispers stories of those who came here once but have missed it many times and displays the lifestyles of the ones that got here and decided to never leave.

Along with calm beach and monuments, Mahabalipuram offers many other attractions. Mahabalipuram is a great place to shop; it has beautiful handicrafts, handmade accessories, excellent clothes and astounding stone sculptures. Following the tradition of sculpting and stone carving, many sculptors prepare varieties of idols and other artistic pieces in abundance.

Mahabalipuram is a very hot and humid place. Hence, it is best to avoid it during summers. The region has winter from November to February. The climate is very pleasant at this time and is the best time to visit.

As most commercial beaches of the country, restaurants in the region serve a mix of continental and Asian cuisines with an Indian twist. A little away from the beach, local chaats can be found for a really low price. There are a number of restaurants that are popular for the food they make and some of them have a list of customers that visit on a regularly basis (in plenty on weekends).

The beautiful coastal city isn’t just known for its calm beach. It is also well known for the Group of Monuments as listed under UNESCO World Heritage Site. Mahabalipuram consists of some great structural monuments. It consists of Descent of the Ganges - the world’s largest open-air rock relief. It is not just a place to awe at the stone architecture but it is also a great spot to shop brilliant stone sculptures (both big and small).

Standing on the shore of Bay of Bengal is the Shore Temple, a popular UNESCO World Heritage Site. The structural temple was built at the time of Pallava dynasty, when Mahablipuram was a prominent port. It is a fruit of the Pallava rulers’ love for art and architecture. It is also one of the oldest rock-cut temples and shrines of the world. The temple complex consists of different three temples, one big and two small ones. The main deities worshipped here are Lord Shiva and Lord Vishnu. Even though it’s one of the most visited tourist destination, it is not a living temple now. The annual Mahabalipuram Dance Festival which is held in the months of January/February is organized in front of the temple.

It is a beach with many boats and a shore temple and also one of the most mesmerizing beaches of Tamil Nadu. Mahabalipuram beach is comparatively less crowded than other beaches in the region such as the ones in Pondicherry and Chennai. Along with a pinch of architecture and a plenty of relaxation, the beach also has a snake venom extracting centre and a crocodile bank. Mahabalipuram beach is a perfect place to enjoy swimming, wind surfing and sun bathing. Plenty of restaurants that line up the coast provide delicious sea food and many cottages provide decent accommodation. 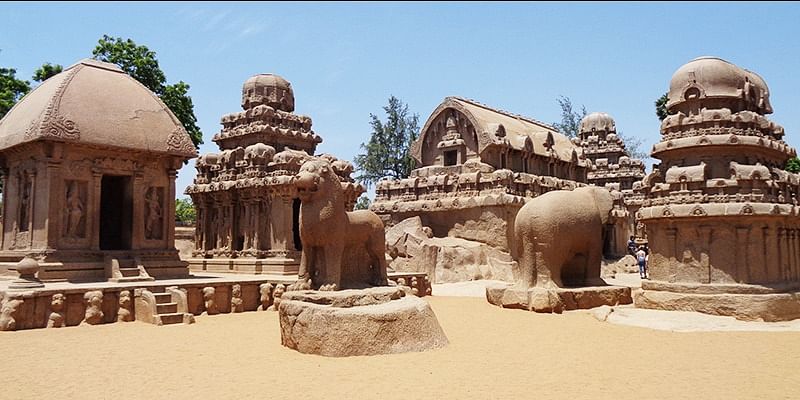 The 11 rock-cut 7th century caves that are found in Mahabalipuram are called Mandapas. The rock-cut temples are covered with some of the cleverly sculpted bas reliefs. Varaha Cave Temple, Panchapandava Cave Temple, Krishna Cave Temple and Mahishasuramardini Mandava are some of the most visited Mandapas in Mahabalipuram. Various tour guides are available in the region to explain the architectural and historical significance of the temples. The Mandapas are scattered around the region but they are not too far away from each other and can be covered by foot or in a bicycle.

Descent of the Ganges

Descent of the Ganges also called as Bhagiratha’s Penance and Arjuna’s Penance is the world’s largest open-air bas-relief. The bas- relief beautifully depicts a mythological episode on two huge monolithic boulders. Historically Arjuna’s Penance was built by the Pallava Rulers to celebrate the victory of Hinduism over Buddhism. The great work of art is one of the most visited tourist spots in Mahabalipuram. Many popular mandapas are also found around the sculpture.

Descent of the Ganges

It is very unfortunate that a place like Mahabalipuram does not have hostels yet. There are quite a few guest houses and cottages that provide decide accommodation at comfortable price. Vinodhara Guest house is a good option to stay in Mahabalipuram. It provides good accommodation for reasonable price. The owners are very friendly and they’ll let you borrow books too!

Hostels: There are no hostels in Mahabalipuram

Road: Mahabalipuram has good road connectivity. Many government buses go to and from Mahabalipuram to most nearby cities such as Chennai, Kanchipuram and Pondicherry.

Air: Nearest railway station is Chennai Airport. It is at about 55 Km from the city.

Local Transport: The best way to go around Mabalipuram is in a bike or a cycle. One can pick up a route map and stroll around the small city all day. Many autos are available in the city too. They offer a tour of the tourist attractions at various fares. 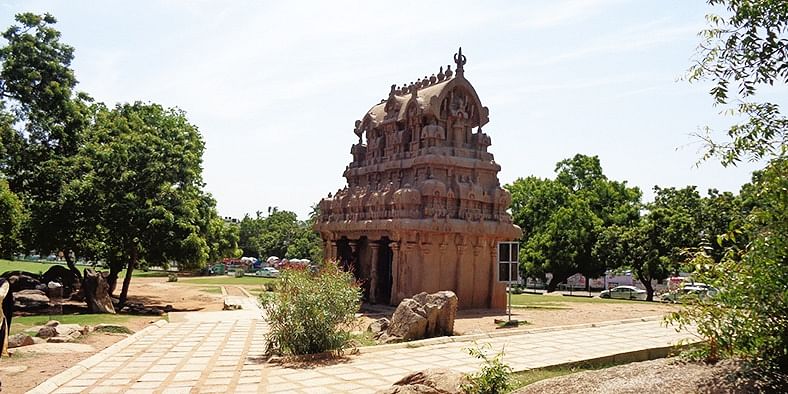 Don’t limit the time you spend here. Mahabalipuram is bliss. If you cherish art and enjoy spending evenings at a calm beach, shift Mahabalipuram to the top of your ‘must visit’ list. The small city may get crowded during the peak seasons but during off seasons, it is usually quite secluded. The beach receives traffic on weekends from most people from nearby cities who come to shake off their routines and relax. Whether or not you participate in cycle races, rent one! As the city is small, the ride isn’t very taxing either. Mahabalipuram is an apt destination to stop by for a few days or weeks and relax on the cool beach or may be to even learn surfing a little bit. 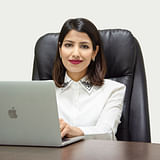