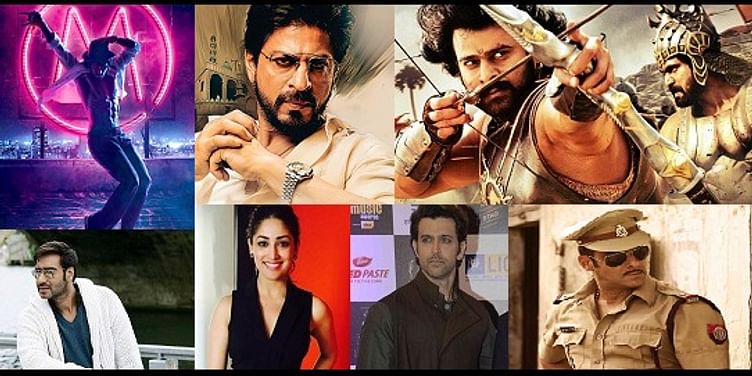 4th January 2017. The excitement still prevails, as the year has just started and raised the hopes of so many people. Students like me are either enjoying their holidays by relaxing in their homes or others who are doing an internship at reputed firms. But whoever they may be, they always have time to sneak from their busy schedules and catch a typical Bollywood movie!

‘Where are you going Shilpa?’ I asked my friend’s sister. She was too smart for a nine year old, and was the ‘biggest’ fan of the handsome hunk and king khan-Shahrukh khan. ‘I am going to watch a film!’ said Shilpa dancing her way down the stairs. There is some magical attractiveness about these kids, I thought and smiled. ‘Which movie are you going to watch?’ I asked her. ‘Dilwale’ she squealed in excitement and made her way down the stairs. ’Have an awesome time!’ I shouted. There is no difference between a nine year old and a seventy year old, when it comes to Bollywood. Bollywood had captured our hearts way long before during the 60’s and the 70’s. Whether it is beautiful Madhuri Dixit or handsome Salman Khan, every actor and actress have millions of fans from all over the world. Now that, there are only 13 days left for this year to end, people of every age group are excited to know what is new and what is going to happen in the upcoming year! Even if it is a remake of any earlier film, or of any South Indian movie, people enjoy watching Bollywood. Now-a-days, the songs are also given equal importance by the public audiences. They like listening to hip-hop and remixed versions of old songs, even if they have the same lyrics and no originality.

After the end of this year, with the Aamir Khan movie ‘Dangal’ which has already created a huge buzz among the audiences, 2017 will start with a bang by none other, Hrithik Roshan and ShahRukh Khan with their films Kaabil and Raees respectively. 25th January will see the handsome Roshan, portraying the role of a blind man, along with his lady love played by none other Yami Gautam, who is also blind. Everything will be going well, until the villain comes in. The concept of a blind man, along with his blind lady love is a new concept on-screen. How and to what extent will this be portrayed, is something which is to be seen. How Hrithik will save his lady love from the clutches of the villain, is something to watch out for. This venture directed by Sanjay Gupta is worth seeing.

But it is not over yet! 25th January, will also the see the Shahrukh Khan starrer Raaes, hit the theatres! Now that’s something which has really disheartened audiences like me. But for Box Office, it will be a clash! After Khan’s ‘Dear Zindagi’, everyone is awaiting his rowdy, yet handsome look from Raees. ShahRukh, as a gangster is something which has not been explored yet in the Indian Cinema. This movie is directed by Rohit Dholakia, who is known for his National award winning film called the Parazania, which received critical acclaim all over the world. Also Nawazuddin Siddiqui, known for his brilliant acting is worth watching for! Thus, it is final! Bollywood fans like me are eager to watch both Kaabil and Raees!

The first half of 2017 will also witness the sequel to the 2015 hit ‘Humpty Sharma ki Dulhania’. The name itself says it all! A masala entertainer, where the heroine is the cute Alia Bhatt, whose acting skills are increasing with every movie and the dashing Varun Dhawan, who has created a famous ‘Govinda’ impression after all his movies. His dancing skills and charm is something, which cannot be avoided. The chemistry between the lead actors is definitely something to watch out for! This film is titled ‘Badrinath ki Dulhania’ and it is releasing on 10th March, which is just four days before my birthday! Definitely a good treat!

‘Why did Kattappa kill Baahubali?’ This statement has become viral since the release of the movie – ‘Baahubali : The beginning’ with the Indian audiences. Every social networking site is flooded with this question! People are very excited, and the acting by Prabhas is mindblowing and something to watch out for. Directed by Rajamouli, and produced in the Tollywood industry, which is later dubbed for Bollwood, this film has every chance of breaking the box office records! ‘Baahubali : The Conclusion’ is finally releasing on 28th April,2017 and has every reason to be watched.

Amidst these actors, how can we forget the Paaji of Bollywood! The famous Akhshay Paaji! This person is responsible for half of the movies of our entertainment film industry. No other actor has the potential to act in the number of movies, equivalent to the number in which he has acted! His comedy timing, romance and seriousness is something which is spot on. His film ‘Toilet- Ek prem Katha’ releases on 2nd June, 2017. The funny name and the romance between Akshay and Bhumi, who is known for her comedy movie ‘Zor lagake Haisha’, has already created a buzz among the Indian public.

‘Thappad se darr nai lagta saab, pyaar se lagta hai’. There are so many of us who have heard and cheered for this line, whenever we heard it from our favourite movie – ‘Dabangg’. The sequel to this movie – ‘Dabangg 2’ was even better received by our Indian audiences. Hit songs and brilliant acting is one of the reasons, for the preference to this adventurous cop movie played by our own ‘Bhai’ of Bollywood- Salman Khan! Removing the evils from the society and still enjoying life, is something to be worth looking for! ‘Dabangg 3’, directed by Arbaaz Khan will release in mid 2017.

‘Michael Jackson’. A single name, which makes us revisit the old times and praise this guy’s dancing skills! Flexible body and rocking dances were the main reasons that people fell in love with this star. 7th July, 2017 will see the release of the movie – ‘Munna Michael’ which stars the cool and young dancer – Tiger Shroff and is directed by Sabbir Khan. It also stars Nawazuddin Siddiqui, who needs no introductions. Tiger’s acting skills in Heropanti and Baaghi has impressed audiences from all over the nation. This hero certainly knows how to dance. Trained in karate, this actor’s action steps are worth watching for.

September will see the famous Ajay Devgan starrer ‘Badshaho’ which will release on 1st September, 2017. This movie, directed by Milan Luthria and written by Rajat Arora, will also see famous stars like Emraan Hashmi, Ileana D Cruz and Esha Gupta in lead roles. After Ajay’s protective father role in ‘Shivaay’, audiences are excited to watch new themes set by this actor.

29th September will also see the release of ‘Judwaa 2’. After the first movie, with twins starring Salman Khan, and yet again Salman Khan, the hilarious comedy made us tickle the funny bones! The expectation from this movie is huge, especially after knowing that Varun Dhawan is signed up for the lead role. David Dhawan is known for his comedy movies with Govinda, and also the father of Varun Dhawan. The main reason to watch this movie will be the superb chemistry between father and son. This will be really enjoyable to watch. Also, the pretty Taapsee Panu is signed for the lead role. After the movie ‘Pink’, expectations from her has increased to sky level.

The end of 2017, will witness ‘Aankhen 2’, ‘Padmavati’ and ‘Golmaal Again’. Aankhen 2 is the sequel to the hit movie Aankhen which released in 2002, having three blind men and the chasing game of cat and mouse between them. It will be interesting to know, what Anees Baazmee plans for Aankhen 2. 19th October will witness the release of ‘Aankhen 2’ along with the clash of Golmaal Again on the same day. Ajay Devgan is not only famous for his angry man looks, but also for his wonderful comedy timings for the famous ‘Golmaal series’. People are excited to watch Rohit Shetty movies, who has a reputation for directing masala entertainers. Enjoyment and perfect comedy timing are the reasons to watch this movie. Finally the release of ‘Padmavati’ directed by Sanjay Leela Bhansali, who needs no introduction after his superhit movie ‘Bajirao Mastani’, is one of the most awaited. 17th November will witness the release of the beautiful and charismatic Deepika Padukone along with the handsome actor Ranveer Singh. They both have a sizzling chemistry which sets the screen on fire. Earlier ‘Ram Leela’ and ‘Bajirao Mastani’ are a witness to their success story, and hopefully ‘Padmavati’ will break even more records than the earlier ones.

Finally, before concluding this article, I would like to say that, whether a movie is a comedy or an action thriller, every movie has its own charm. Bollywood has been a witness to various surprise hits and flops over the past years. There is no shortage of talent in our Bollywood industry, and we have a very bright future to go. Watching and appreciating their acting, is one way to encourage the future generations to showcase their talent from over the world in our Bollywood, so that we can get more classy movies to watch from!