Step by step guide: voluntary winding up of affairs of LLP 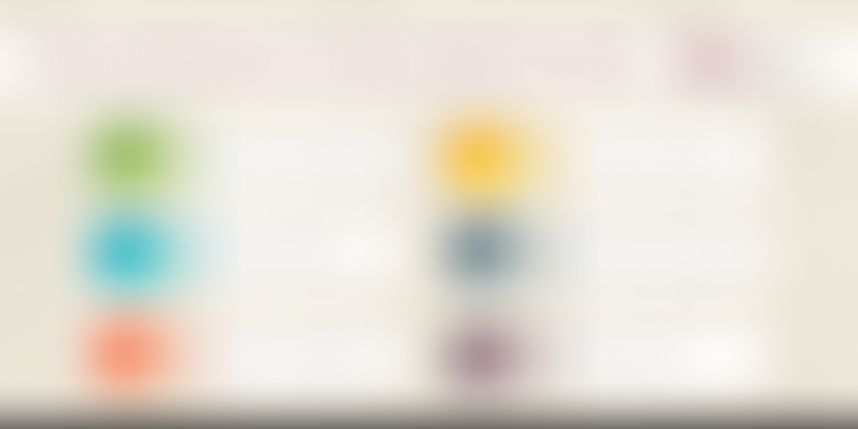 Closure of Business carried on under the Limited Liability Partnership can be effected either by declaring the LLP as defunct or it's winding up. Where we have already discussed our previous post, another route of the closure of business under LLP through winding up is discussed here.

“Winding up of the business is the procedure where the selling of business assets and paying off to creditors take place. In even of any surplus profit or assets, those are distributed to the partners of the LLP in accordance with the Limited Liability Partnership Agreement.”

Grounds of winding up:

The Limited Liability Partnership shall go through the process of winding up, after online LLP Registration and commencement of business under the said LLP, based on following grounds.

a) The Limited Liability Partnership decides to wind up the LLP by the Tribunal;

b) The number of Partners in the LLP is reduced below two for more than Six Months;

c) In case, Limited Liability Partnership is unable to pay its debts;

d) The Limited Liability Partnership has acted against the interest of sovereignty and integrity of India or security of the state or public order;

e) Any other ground, the Tribunal deems fit for winding up of the LLP.

Types of Winding up:

Above provided grounds fall either under Voluntary or Compulsory in nature. Based on grounds of the procedure of winding up differs, which is bifurcated in following heads:

After online LLP registration, where the partners of the LLP mutually decides to wind up the Limited Liability partnership (ground (a) referred above) falls under this head. The same can be further classified in following heads.

a. Voluntary winding up by members

b. Voluntary winding up by creditors

Grounds (b) to (e) fall under this head, where the Limited Liability Partnership shall be compulsorily wound up by a tribunal.

Winding up procedure requires the higher involvement of practicing professionals like Company Secretaries. Further, contrasting to procedure of declaration of LLP as defunct, the appointment of Liquidator is mandatory under this route.

1(a) Voluntary winding up by members:

The Limited Liability partnership, through its partners may decide to wind up the affairs of the LLP on any voluntary grounds on mutual agreement of the Partners or any other ground provided in the LLP Agreement of the concerned Limited Liability Partnership. The LLP shall appoint a liquidation or provisional liquidator to wind up the LLP and its affairs.

1(b) Voluntary winding up by creditors:

Where the Limited Liability Partnership and its creditors are of the opinion that the LLP may not be able to fulfil and pay its liabilities to continue its business. Here, the LLP should convene the meeting of its creditors to allow them to consider the proposal for the company to be wound up.

An LLP may be wound up by the order of NCLT (National Company Law Tribunal), under certain circumstances as provided under the head of “Grounds of winding up” of this article. The Tribunal may appoint an official liquidator responsible for winding up of the affairs of LLP in respect to which the order of winding up and dissolutions is passed. The liquidator shall be the person responsible to undertake required steps and actions as and when necessary or under order of Tribunal. 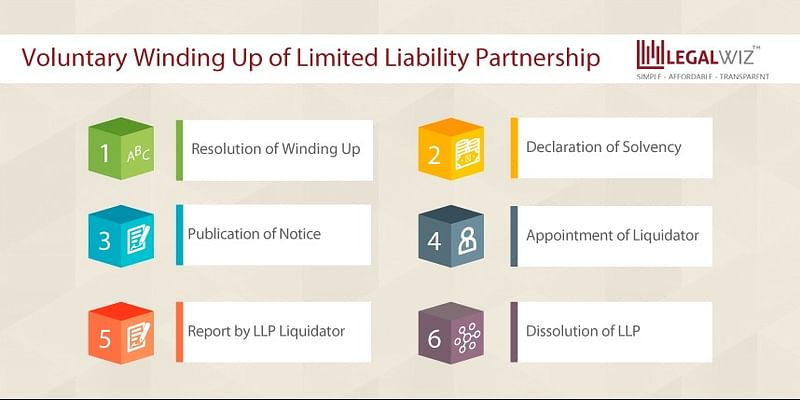 1. Resolution of Voluntary winding up:

Except the approval from the Partners of the LLP, the voluntary winding up cannot be affected. For commencement of the said procedure, first of all, a resolution seeking consent and approval of 3/4th of partners shall be passes in the meeting thereof. On passing of the said resolution, the process of winding up is deemed to be commenced. Further, where the LLP has the creditors, being secured or otherwise, approval of majority of the creditors shall also be accorded in the meeting of creditors.

• Majority of the Designated Partners (not being less than two) are required to file an affidavit making declaration that the Limited Liability Partnership does not have any debt or that the LLP will able to pay its debts in full within specified period that does not exceed exceeding period of one year from the commencement of the procedure of winding up of the LLP.

• The declaration mentioned above should accompany with a statement of assets and liabilities for a period ending with the latest practicable date.

• Valuation Report of the assets, if there are assets in books of LLP, shall also accompany the affidavit.

This declaration accompanied with abovementioned report should be submitted to ROC in e-Form 3 not before 15 days immediately preceding the date on which Resolution for winding up of the LLP is passed.

The LLP shall file an application for winding up to the Tribunal after according consent of creditors in 2/3rd majority as to following effect that the voluntary winding up is in interest of all the stakeholders and other matters as prescribed.

A notice of the resolution shall be given within 14 days of consent from creditorsthrough newspaper advertisement circulating in the district, in which the Registered Office of the LLP or any other office being Principal Business Office is situated.

The Liquidator, who shall be responsible to carry on the procedure of liquidation, shall be appointed within given period, who shall be referred as LLP Liquidator at remuneration fixed by and payable by LLP. The appointment shall be informed to the registrar within 7 days from appointment.

•The appointment of Liquidator can be made by members or creditors by mutual agreement, however, if the creditors appoint different liquidator, the liquidator nominated by creditors shall be LLP Liquidator.

A note shall be taken that powers of the designated partners or other partners shall cease after the appointment of Liquidator.

• The LLP Liquidator shall prepare a report for furnishing the mode in which the winding up of the LLP is directed and the properties have been disposed of along with final accounts of winding up.

• The Partners/Creditors shall pass a resolution, if 2/3rd of the partners/creditors are satisfied with the report furnished by liquidator.

• The liquidator shall, within period of 30 days of passing of resolution, furnish final winding up of accounts to the Registrar along withreport and explanation in addition to filing an application withthe Tribunal for passing an order for LLPdissolution.

In case, the Tribunal finds the application and report furnished satisfactory with regards to the process of winding up,the Tribunal concerned may pass an order to the effect that the Limited Liability Partnershipshall stand dissolved.

On receipt of the order, the LLP Liquidator shall file the stated order with the ROC, who shall furtherpublish a notice in the Official Gazette declaring that the LLP stands dissolved.

Get in touch with our experts at LegalWiz.in for free consultation on our toll free number 1800 313 4151. Feel free to drop an e-mail at support@legalwiz.in to avail services of winding up of Limited Liability Partnership at affordable cost in simple and hassle-free manner at affordable prices.