Life in Bangalore has changed over 30 years - beyond traffic & the weather!

The passing of Roger Moore, Bangalore’s favorite Bond, brought back memories of another closely associated icon of Bangalore that is no more - the old Lido Theater! Every alternate Deepavali, a new James Bond movie was released and the regular family outing involved going to Lido for the evening show at 6:30pm, watching the movie, then driving to Udyavan on MG Road for a drive-in dinner, heading to Lakeview/Chit-Chat for an ice-cream or to Sreeraj Lassi bar for a kulfi/lassi, and then returning home to Indiranagar. If you were better-off, you probably had membership at the “Bus” Club or Century Club, and if you were from the armed forces, you had privileged access to RSI. 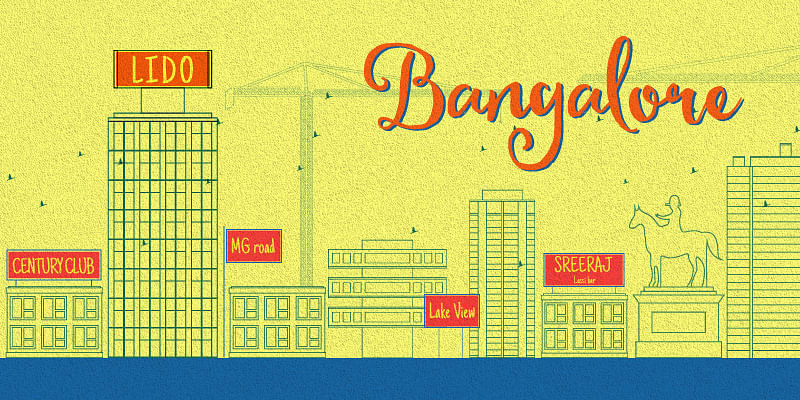 Did that stir your memories?

To most readers who didn’t live in Bangalore in the 70’s and 80’s, probably not - but those who did, would surely remember the wonderful icons of Bangalore that haven’t survived, or are a shadow of their old self. Add to the list Plaza, BluMoon/BluDiamond, Higgin Bothams, Gangarams, India Coffee House, Kwality, TopKapi, Copper Chimney, Berry’s, Prince’s (did you know there was a really expensive dish that costed a whopping 28 rupees!) - OMG the list goes on and on. Bangaloreans loved to walk in the park - we had several of them - or around Sankey Tank and even go boating in Ulsoor Lake. Depending on which side of town you lived in, you often went to MTR or Vidyarthi Bhavan, to CTR or Veena Stores, to Udyavan or Airlines Hotel - the last man standing)! And an even more exotic movie experience was going to Drive-In theater!

I grew up in Bangalore in the 70’s in Indiranagar - studied at St Joseph’s Boys’ High School, PUC college and then at UVCE for my engineering. My dear father, Wg. Cdr. K.N.R Swamy(AVSM) used to work at HAL and we were brought up as hard-working, self-made, middle-class Indians who loved the simple life. Living in Indiranagar in the 70’s was like living in Hoskote today - auto drivers refused to go past Ulsoor and you had to walk home along the empty 100 feet road if you missed the 131 from Majestic or 130 from Shivajinagar. I had the privilege of playing street cricket as a 15 year old in Indiranagar with a 6 year old Rahul, who even then demanded last-man batting and used to play each ball and say “I’m going to become Gavaskar” - some of my fond memories of that era. Little did I expect he'd turn into a real star - the Wall, Rahul Dravid!

As a student, my best friend and I would ride our bicycles home from Museum road to Indiranagar - over a 55 minute lunch break. Twelve minutes is all it took - on a cycle! And a “stop by Commercial Street and get some samosas and carrot halwa from Bhagatram” was always greeted with “of course mom”. Josephs vs. Cottons vs. Cathedrals in Hockey and Cricket, and Josephs vs. Baldwins in Football were the matches we talked about all year as a schoolboy - if you went to the ICSE system; else Indian High School vs. National High School etc. - I have no idea why these were segregated. Throughout college at UVCE, MG Road and Brigade Road were the home away from home - and at the drop of a hat, a gang of 12 would land up at Plaza for a movie and followed by ice-cream with our pocket money of 15 rupees! Cubbon Park was so unbelievably serene as was Lalbagh and its annual flower festival - still remember listening to Usha Uthup once.

Entertainment as a school-boy was as simple as trying to imitate the hawker at the less than ten traffic signals in the city shouting out “Chicklet-Chocolate-Chewing-Gum-Anyone” or “Pan-Beeda-Beedi-Cigarette” or “Race-Book” and a trip to the movies.

And then there was the rich heritage of sports - Karnataka vs. Mumbai was the annual Ranji Trophy final. I remember attending the first test match in 1974 when Greenidge made 93 and 107 on debut, Kallicharan and LLoyd scored centuries and BS Chandrashekar destroyed another debutant - Sir IVA Richards! Of course Viv was helped by the board who dropped Chandra for the Delhi test and he scored his famous 192* and the rest is history. But watching Vishwanath and Brijesh Patel in the covers or Roger Binny’s debut against Pakistan in 1979 - all still are vivid memories. As a teenager, I used to take the bus to Shivajinagar and walk to the stadium for an Under19 match and cheer Hari Gidwani’s century by running on the field to congratulate him. Imagine doing all that today! And then there were the Amritraj brothers and Ramesh Krishnan who were the gods of tennis - and I enjoyed reading R. Arvindam and R. Mohan’s sports journalism in the local papers.

Even in the 70’s we had the largest number of auto-rickshaws, almost a lakh of them. And since you had to wait 13 years to buy a Bajaj Chetak - unless you paid in foreign currency - teenagers had to make the big decision of Luna or TVS50 or the mosquito-killing Suvega. Decisions in India were simple - cars were Fiat or Ambassador, scooters were Vespa or Lambretta, mopeds were Luna or TVS, bicycles were Atlas or Hero, and toothpaste was Colgate or Forhans (the toothpaste created by a Dentist!). Life was simple, people were simpler - and happiness was a walk in the park and breathing in oodles of Oxigen into our lungs!

I left Bangalore in 1987 and spent 16 years in France/Toulouse, Seattle and Silicon Valley and returned in 2003 and have lived here since - and oh boy did the city change in those 16 years and in the 14 years since. The most obvious is the weather and the traffic - but the most important is that the city is a shadow of its former self. The concrete jungle that has replaced the old bangalore is visible in the transformation in the city seen in this 2006 Indian Institute of Science publication - and that was 11 years ago! 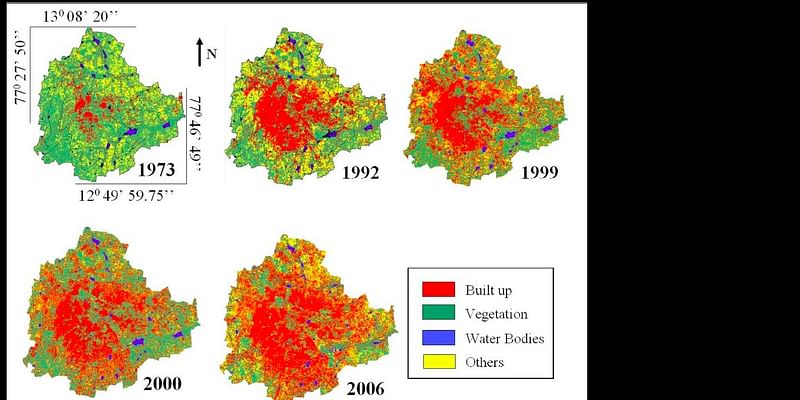 Bangalore’s dramatic changes are perhaps a victim of our weather and the niceness that goes with it - that has made the “Solpa Adjust Maadi” or “Don’t worry Madko Bedi” a reason for welcoming people from all over India and the world. Going to Suma Coffee or Cauvery Coffee or Madhu Sweets or PN Rao Tailors was always a pleasure because the people were always courteous, welcoming and friendly.

The old Bangalore will never return - but as I now start thinking about preparing to pass the baton to the next, I really feel it’s our responsibility to try and repair the damage we’ve done and leverage the last 30 years of “progress” and “wealth-creation” to do so.

Karnataka is one of the top tax paying states - and yet our infrastructure has only lagged. While one side of my brain feels I should assist in governance, the other side of me is leaning towards a few things in my control. Here are some activities I’m trying to do to try and bring back the Bangalore of old….

Turn off the lights and reduce electricity usage

Focusing on making the world better for others

Everytime I go out, mark 50 rupees in a kitty and contribute 750 bucks at a time to Akshay Patra - an amount that can feed a child for ONE year!

Follow traffic rules and be accommodating to others - OK I’ll try ;)

Bring back the friendly, good-natured Bangalorean .

There is no real-life James Bond to solve our problems - how will you help make Bangalore more livable - not just for yourself - but for the next generation?

Give it some thoughts and do share your views too!