Would you believe if I say that dance originated more than 9000 years ago? Unbelievable? Some will surely contradict. Well, archaeological evidence for early dance includes paintings in India at the Rock Shelters of Bhimbetka, and Egyptian tomb paintings depicting dance figures, dating way back to 3300 BC. Surely times have changed tremendously. And so has the dance forms all across the world. 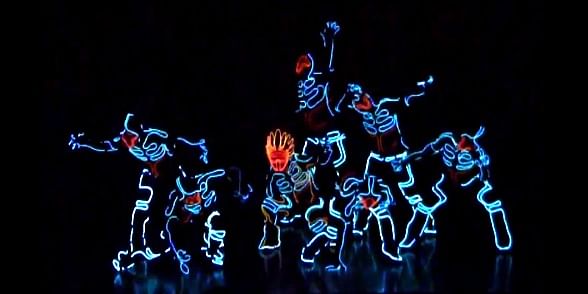 Clearly, every dance form, be it in the western or the eastern hemisphere, has evolved over time. But there’s one thing that ceases to change – the conspicuous use of the art to express emotions and feelings. Dance, ladies and gentlemen, has changed lives and continues to do so. And the speedy evolution in this form of expression is inundating.

One such dance form which has risen from a very distinctive inspiration is Tron Dance. Now how many remember the science fiction film ‘Tron’ released back in the ‘80s? A majority. A computer programmer trapped in a software world attempts to escape by interacting with programs and codes of the mainframe computer. “The movie is the sole inspiration of Tron Dance.”, says Nikhil Bharadwaj of the famous dance company in India, ‘Glowdiators’.

Tron Act has created such enhancements in the field of performance arts that both can be spoken of in the same sentence. This dance form is an alluring and exhilarating concoction of dance and technology which has created a huge wave in this ocean of performance arts. It has successfully increased its fan base in Asian countries as well. Various dance groups all over the world are falling in and taking up this dance form, performing and increasing fan base in every part of the globe.

To give an electronic feel to the performance, the costume requires being installed with Light Emitting Devices to provide a spectacular gleaming effect. The dance moves complement the irregular switching cycle of the LEDs. But the moves themselves are music dependent. Therefore the selection of music plays a vital role in the process of building a successful ‘Tron Act’ routine. The music, without doubt, is EDM (Electronic Dance Music). The integration of EDM music gives the whole act a new dimension and while doing so, provides the audience an exceptional performance.

Tron Act is a result of the quest to keep performance art alive for many years to come. More and more dance groups are coming up and performing the Tron Act publicly to pay its inspiration a deserving tribute. Tron act, a present-day dance shape has made its own space in the TV commercial enterprise as properly. Dance groups like Glowdiators have established themselves as the go-to Dance company in India, which professes the Tron Act and can provide customized dance performances. Many Dance Reality Shows are taking interest into making Tron Act mainstream. Dance groups are performing on the television shows and also participating as dance teams on numerous dance reality shows. This certainly shows that ‘Tron’ is the next big thing when it comes to performing arts.