[Travel Series] Allahabad but they call it Illahabad! 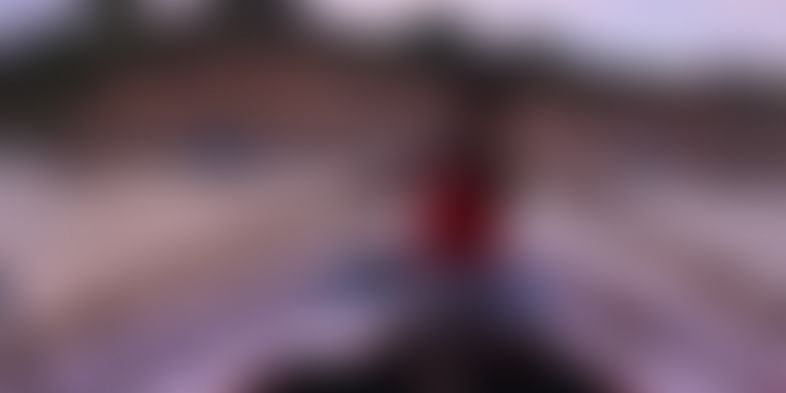 The train from Lucknow to Allahabad was on time and I had enough time for a sound sleep in upper berth of the train. Prayag was the last stop of Bareilly - Allahabad passenger so there was no worry that I will miss out the station. 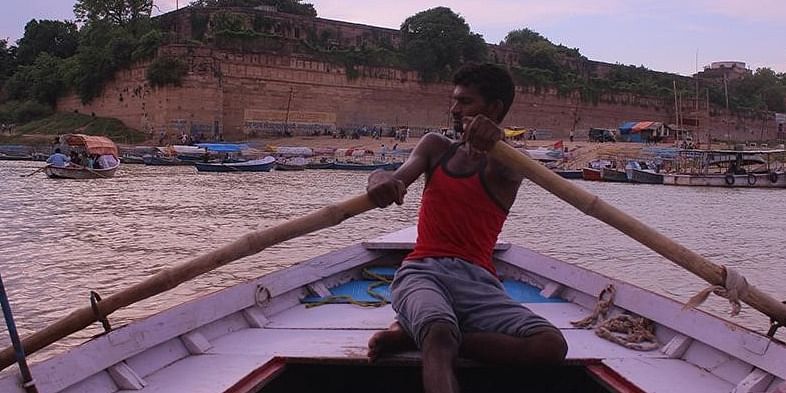 Sangam- Where Yamuna and Ganga meets

Prayag - It was the old name of Allahabad and later it turned to Illahabad then to Allahabad. But some people still call it Illahabad. This is the second oldest city in India and very important in the Hindu mythology. During Kumbamela, its one of the four Sangamam in India where Yamuna and Ganga meet (They believe Saraswathy bought to the earth which dried up).

Prayag station is 4 km away from the Allahabad central. Outside the station, there was a long queue of Tuk - Tuk. While coming to the Tuk Tuk line I was approached by an Auto driver who was offering 120rs for a ride. I suggested share but he was looking at my back pack and telling it's not possible to get into a share with my bag. As I dint want to spend so much on travel I got another sharing auto which was filled and had enough space for me and bag.

It was a 20 minutes ride and on the way we crossed Chandra Shekhar Azad Park and Allahabad Museum. The auto dropped me right in front me Allahabad central railway station.

Then it was up to Google Map’s to guide me to my Hotel Prayag. The climate was not better, it was 34 degrees. The map showed me the hotel was close and I could see the name board from where I stood. The city was slowly coming to life. The shops were opening and the road was damp with last night’s rain. I also saw some school kids who were heading towards the station.

The check in time at the hotel was at 12 PM, after a small conversation I made it to 24-hour check in - check out. Room was on the third floor with an old air cooler. It was my height and full of dust. The water leaked through the sides which made the floor wet. But the bathroom was neat. I had no energy to go three floors down to change the rooms. Instead, I freshen up and got ready for breakfast at the hotel’s restaurant.

Thankfully the restaurant was air conditioned. I had no clear plan for the day except a visit to Triveni Sangamam. But I had an un-ending list. When I Googled sightseeing places, I found Khusro bhag was the nearest one. So I decided to start from there. The hotel manager directed me to reach the garden by walking around the auto stand nearby. First I took a wrong turn but then in 10 minutes I get into the bhag. There were no entry fees. Jahangir's summer palace - That was what all I knew from the description in front of the garden. I was about to stop the walk and go back. Then saw a gate and beyond that a Mughal construction. Being a fond lover of tombs and monuments, it was hard to return from the sight. 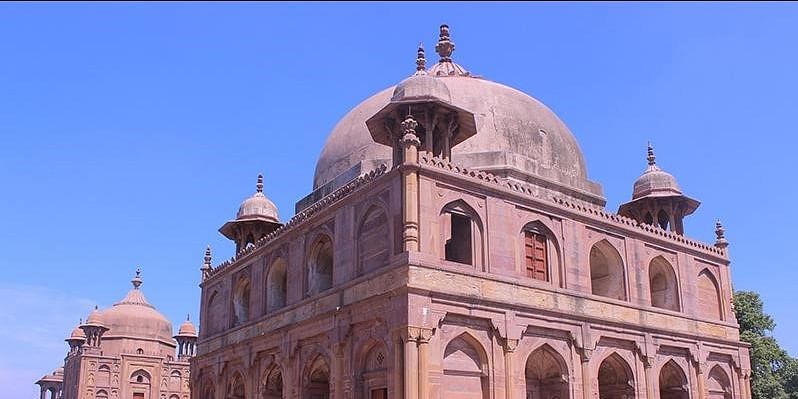 The choice I made for the day was a perfect one. It was Jahangir's eldest son and famous for his amicable character was buried inside here and in the same complex three more tombs. One was his own mother's who suicides seeing the bitterness between the father and son and next is his sister who built one tomb for herself but she was buried somewhere else. The next one is very interesting, it was his servant's who used to make the pan for the royal family. Few college students were around the main mausoleum for their combined study. They chose the shades to escape from the sun. 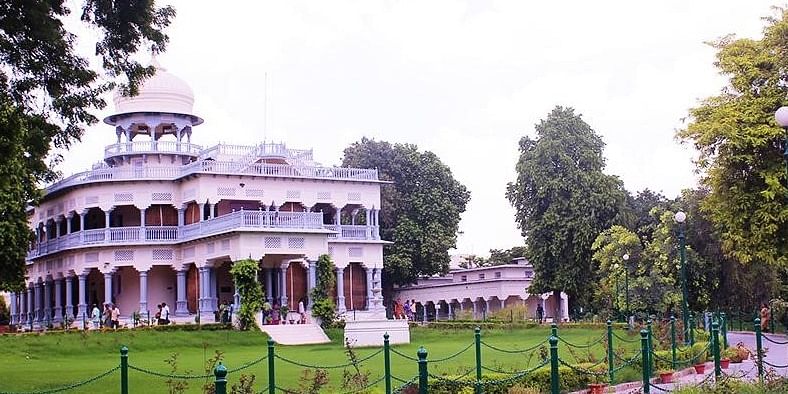 I had no rush and taking a break from the sun and getting into shades I took few snaps around and again started walking to another side of the park. But the door was opening to the other side of the street. I met few local guides there and then one offered his to show me around but I ignored it as I was already done with sightseeing. Before getting out I sat at the park bench close to the entrance and started browsing where to head next.

Anand Bhavan struck out of the list and I headed to the nearest auto stand to get a shared auto. But no auto was going directly there and one of them suggested that I to walk little more ahead from where I would get direct autos. He was right but I guess it was a less traveled route and the auto was waiting for long 20 minutes to get more passengers. I was sweating inside because of the heat and finally, one of the people who was waiting along with me started shouting at the driver to start.

I was looking at my Google map to map the location and it said that I was traveling through a longer route. May places I thought of asking him to stop so that I can get down but decided to sit back and see till where he will go. He stopped at a place and started talking to another auto guy. Then it was an exchange plan of theirs. The second person dropped me in front of Ananda Bhavan. He paid 20rs to the first auto and I paid 25rs to the second auto.

The auto stopped right under the board which was written “Anand Bhavan”. It was mentioning about the 1PM-2PM lunch break. My watch was showing me 12:30 PM. Nearby the gate was a shop which selling fresh sugarcane juice. I had two glass and get into the gate. Two police men were there and asked me “Came here to visiting?” I said “Yes”. On my left there was a well maintained green lawn and a house which is Swaraj Bhavan - Indira Gandhi’s birth place. I was little confused where to start from. There was another way going to the main building which was Nehru’s home, Security stopped me there asking entry ticket. But I told him I couldn't find any ticket counters at the entrance. Then he showed me the right way by pointing the real entry gate at the other side of the lawn. He told me to get out of the compound and enter another way. I was tired to walk around again and after bargaining, he let me in and made sure that I wave the ticket from the distance before I get into the house.

Next destination was decided early and it was Chandrasekar Azad Park and Allahabad Museum at the center of the city. This time luck was good to get a direct auto to the park but my entry was again through a wrong gate. This time too cajoling security I went through the park to the other side gate to get the 5rs ticket. The museum was restricted with photography and it was displayed all kind of arts and crafts. The most interesting thing was the students who were sketching their works looking at the sculptures in there. Chandra Shekar Azad’s gun was the prime thing which attracted me among other show pieces. That was he used to shoot himself. 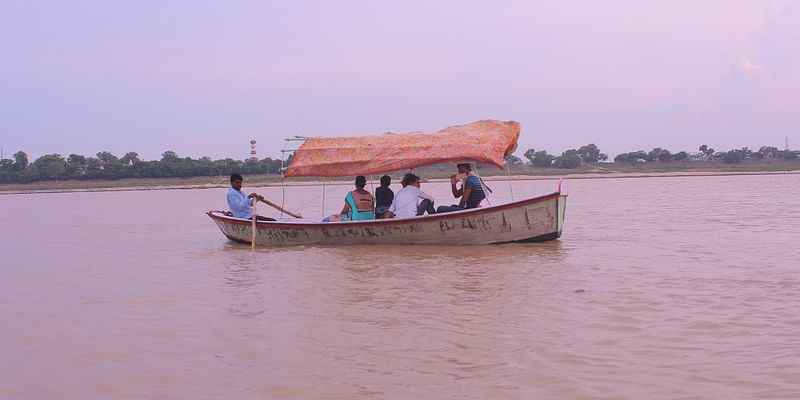 After roaming around I got a seat near to the main gate where I found some old fellows who were working in local news paper but traveled around India and the security guy. Killing 2 hours was in need to go to Sangamam for the sunset. So joined with them for some travel stories. Again they suggested how to go and where to go.

As per their instruction got an auto to Chunki and from there after bargaining got the same auto till the Sangamam. But still 1km walk to the shores of Ganges. Allahabad Fort on my right side. It was almost 4.30PM. Stood a while in a confusion should go for a boating or walk around the shores. But by then the boat people caught me. Rather than the budget, I preferred a boating.

Afterall it's not just a boating but boating to the Sangamam where three rivers meet. Ganga, Yamuna and they belive Saraswathy joining under the earth. The journey was a pleasure and boat guys was insisting me to offer some coconut to the river as it was my first journey to the Sangamam. I ignored it but lighted 3 small diya into the meeting point of the rivers. They were saying each river is different in colors but it seems all brown for me. After the boating, it was getting dark and in a few meter walk, i got an auto to Chunki.

There the driver called a small boy who looks 10 years in age, to get an auto for me to the railway station (where near I am staying!). “Chotu’ did a marvelous job and I got an auto from Chunki to station in less than 5 minutes. As it was the last day at Allahabad thought of roaming around for some street food. But almost everything was non-veg and I am a vegan! I got back to hotel soon and before going to bed everything was packed well as my next day train to Varanasi was at 5:50 AM.

Finally, a dream destination is a sleep away!