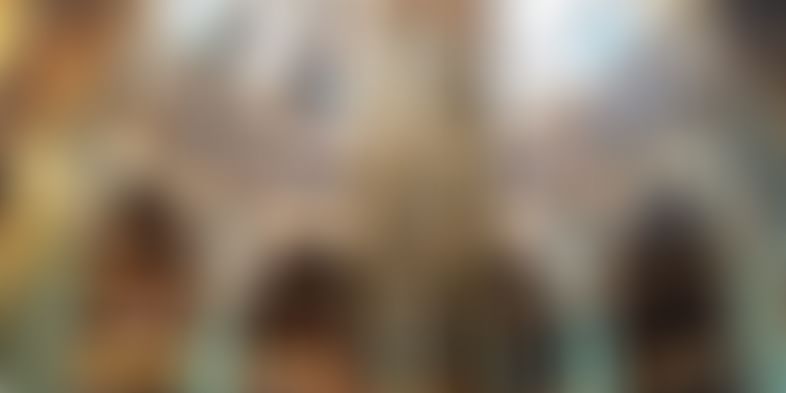 My expedition with AAO Hostels started with a masterpiece that I am pleased to share with all of you.

The titanic construction of the Royal Palace in the city of Mysore was located 164 km from Bangalore, a four-hour trip on a KRSTC bus that came out to about ₹125 rupees.

I shared the journey with fellow travelers who boarded and got off the bus at each station.

“It must be a very popular route,” I thought philosophically while observing the seats and corridors occupied by the kindly inhabitants of the state of Karnataka.

How could it not be a popular city? The road led you to one of those the multifaceted scenarios that make you appreciate every step that you took to get there.

The trip was entertaining; everything seemed new and far-removed from my reality. I felt like a scientist; I enjoyed observing my surroundings, experimenting, and deducing theories. 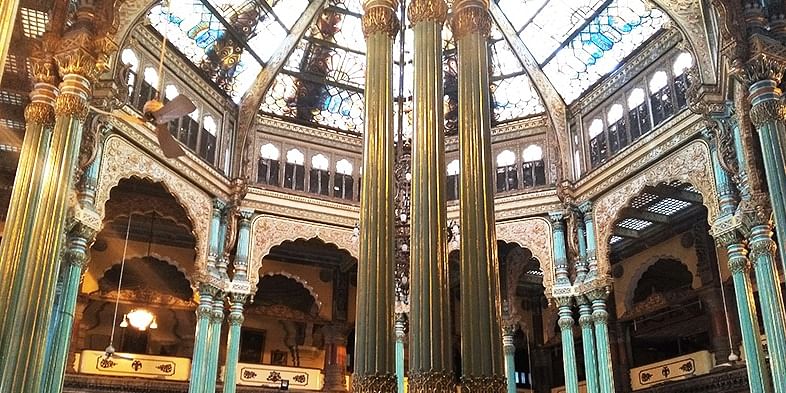 Mysore is a city away from the hustle and bustle; it is clear that order and cleanliness stand out in the city of the majestic Royal Palace, made of granite, with three floors of Indo-Islamic architecture.

The Royal Palace of Mysore was once the residence of the Maharaja (the monarch of an Indian state); but before that, the palace had originally been the home of the Wodeyars, the kings of Mysore. Today, it is considered the most outstanding emblem of the city.

The architectural jewel of colossal dimensions, luxurious rooms and large gardens dates from 1897, and is the work of the English architect Henry Irwin.

The exterior lighting of the palace at nightfall is the scene of a multifaceted spectacle that delights its guests with different scenographies during the day, at sunset and at night. 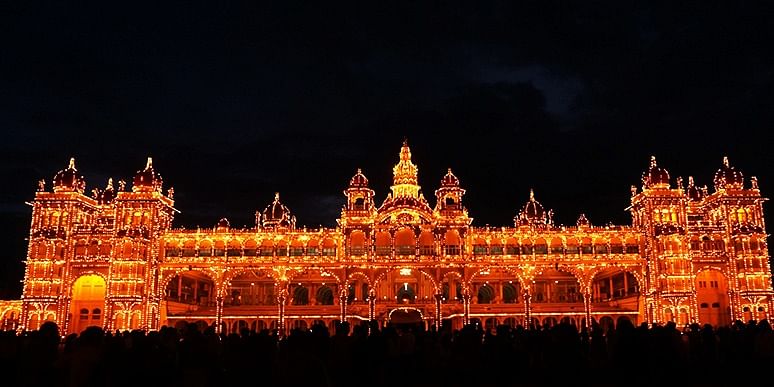 When I started the expedition organized by AAO Hostels, they notified me with a pleasant surprise:

- Marchessi, your trip will be sponsored by the Tourism Department of the government of Karnataka State.

I knew that having the support of the Tourism Department was a great honor and a great responsibility at the same time.

I was a blogger exploring Karnataka and my desire was to document every moment so we could learn together through Chessi Bofa.

I was ready for action! 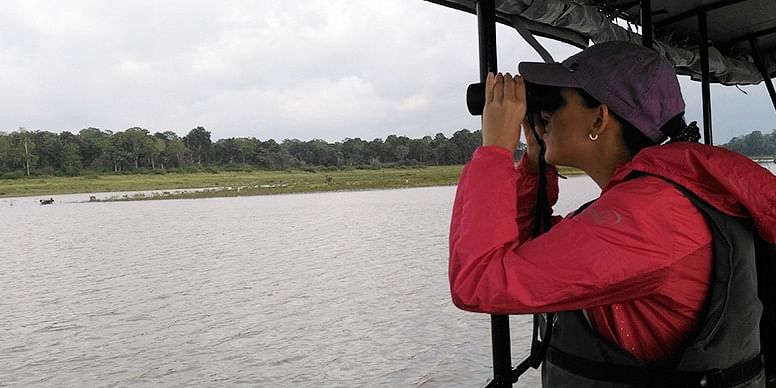 Photo #1: I was very focused on the landscape; I wanted to see many animals.

I started with an ecotourism adventure at the Kabini River Lodge facility, in the midst of a paradisiacal resort located south the Nagarahole National Park.

Its waters nourish the green vegetation of the Nagarahole National Park, which the UNESCO World Heritage Committee may soon declare as a World Heritage Site.

The Kabini River Lodge is situated at Karapur about 220 Kms from Bangalore and 80 Kms from Mysore.

The Nagarahole National Park is the cradle of a great diversity of flora and fauna native to the zone.

The wildlife has a strong presence in this vast territory; among the species that stand out are elephants, crocodiles, peacocks, deer, sloths, and a myriad of birds.

Kabini irrigates one of the largest natural wildlife gems in India. 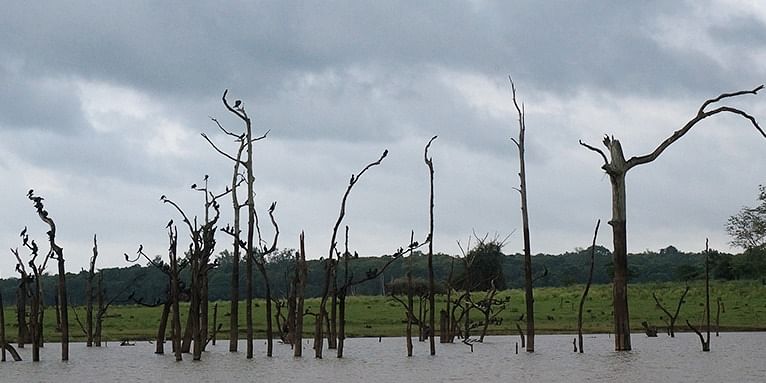 Photo #2: The birds rested on the logs that were inside the river.

The trip was long from Mysore. It is difficult to get there by public transport; if you travel at night, it’s better to hire a private driver.

At 8:00 p.m. I met my driver in Mysore and then set off on a long journey along the paradisiacal, yet solitary and dark, streets surrounding the Nagarahole National Park.

I arrived at the Kabini River Lodge at approximately 10:00 p.m., where a member of the staff was already waiting for me. He showed me to my room and explained to me everything I need to know about the lodge.

The architecture of the building was colonial; when he opened the door, my room was huge, refreshing, cozy and luxurious.

The explanation didn’t take long; after he left, I quickly fell asleep in my white bed. I was tired after what seemed like a whirlwind of traveling, but I had a positive attitude.

My stay at Kabini worked out perfectly for a nearby boat safari I went on, in which the guide knew every corner of the route. I know that I saw so many animals thanks to his wisdom and ability to identify the the animals camouflaged among the vegetation .

The wide dining room looked out over the river and didn’t have any walls or obstacles preventing you from connecting with the moment full of positive energy. It was also an ideal space to meet other guests and share experiences.

I was overcome by ecstasy when the staff of Kabini River Lodge told me:

- You have to get up early tomorrow. The safari starts at 6 in the morning.

I was excited. I had a date with the wild, virgin and innocent life that bathes the river Kabani.

The next morning, a hotel employee led us to the pier.

The safari was by boat! A boat piloted by a guru of the mystical waters that were wrapped in legends.

Nature danced before me in every cubic meter as we stealthily traveled up the Kabini River. Its flow is the habitat of aquatic species that are below the surface... The silhouettes of the crocodiles were part of the landscape.

A group of deer fed on the bank of the river. They looked so calm and the whole scene was majestic. I was scared that one of them was going to get trapped by a crocodile, though... However, within the jungle, the rules of nature govern, and animals are able to interpret wild communication.

Photo #3: The deer drank water very close to the river, the green of the forest made them stand out among the landscape.

The binoculars allowed me to see a peacock that the boat pilot identified a good many yards away among the trees.

He had eagle eyes! How could he see that peacock without binoculars? He seemed to be a complete savant in everything related to the National Park and know each one of its corners.

Tall stems protruded out of the river: leafless trunks that were the resting place of small birds that coexisted with the great variety of flora and fauna of the national park.

Suddenly, our travel guru turned off the engine of the boat, and without saying a word pointed to the elephant feeding in front of us.

A wild elephant away from human contact, in its natural state!

I had seen elephants before; I had hugged them, I had ridden them, I had been photographed next to them, but to see them there, in the jungle, moving freely in its natural surroundings made me happy. 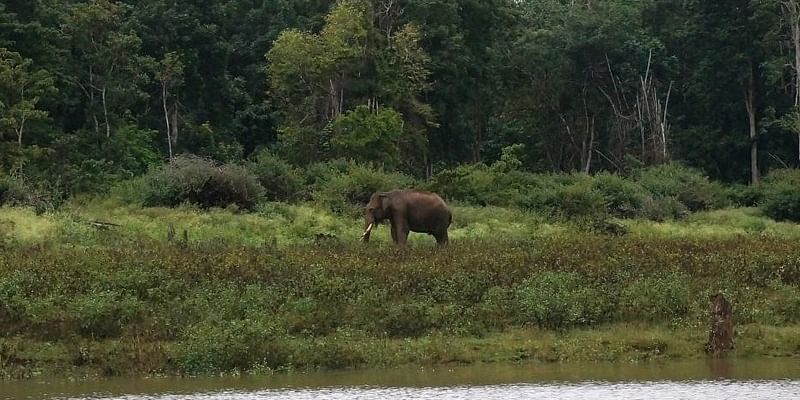 Photo #4: I could not believe I had seen a wild elephant so close to me during the safari. I was really excited.

How many more elephants could there be among the dense trees of the Nagarahole National Park?

But only he came out to greet us. I did not want to leave! I wanted to continue looking at the nice elephant from the privileged view that the boat provided.

I noticed his large size, his gray color and his movements... He was restless; he shifted his weight from one foot to another, and in a matter of minutes he went away among the trees. I lost sight of him.

"Back to earth." A buffet breakfast was the reward for an early morning which was very much worth it.

The Resort takes special care to cater to the varied tastes of an international clientele. The buffet meals include Indian and Continental menus.

Then I said goodbye to Kabini, happy to have contemplated the solemn scene that came from my restless traveling soul.