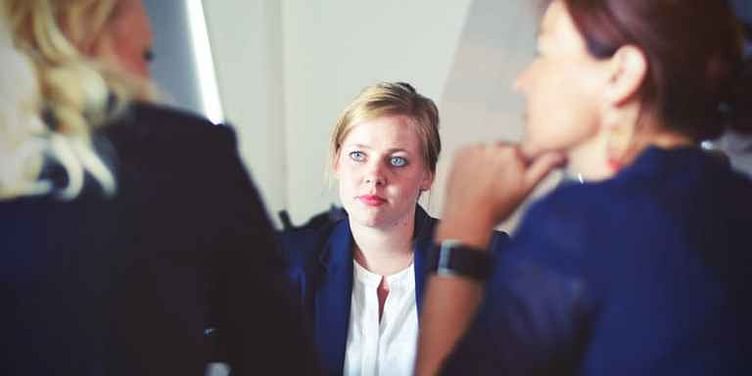 Millennials represent a demographic cohort that are generally agreed to be born between 1983 and 1999. The generation has certain traits that make them distinct from the previous Generation X and Baby Boomers.

As of 2018, millennials represent the largest generation in the Indian workforce. If you are a millennial and looking for a job, you need to prepare well for the interview.

An interview is typically the last hurdle in getting a job. Here we have listed eleven mistakes that millennials normally make and also how to avoid them.

1. Not Being Dressed Properly

While there is nothing wrong with wearing what feels right, giving an interview in casual attire projects an unprofessional image. You should dress properly for the occasion. Avoid wearing flashy jewellery or clothing that is too casual such as a t-shirt, golf shirt, jeans, or clothes with too-short hemlines or plunging necklines.

To make a good impression on the interviewer, you should come to the interview in professional attire. For men, this means wearing a suit, tie, dress pants, and shoe. For women, the professional attire includes plain blouse with formal skirt/trouser of conservative length or cotton salwar kameez with a plain dupatta. Also, wear a shoe with low heels to feel comfortable during the interview.

So, what questions should you ask during the interview?

Here are some great questions that you can ask at the end of an interview to project a positive image.

Be mindful of the interviewer’s time and keep the questions to five or less. Also, this is not the right time to ask about salary and benefits. In case the interviewer asks for an expected salary or benefits, you should say that you are open for negotiation with the HR representative or the hiring manager. These things should be discussed once the initial offer is made.

3. Lying about Credentials and Skills

Most people think that they can get away with a fib during the interview process. But this thinking land them into trouble later down the road.

You should always be honest and explain your position truthfully instead of being caught lying later on. An MIT dean had to face public shame as it was found out later that she did not have any college degrees.

Moreover, lying during the interview could land you into jail as well, which was the case with a Norwegian Bureaucrat who was ordered to serve 14 months in prison for not telling the truth about her degrees.

Remember that once a candidate qualifies the interview, an employer generally carries out a thorough background check. This includes verification of degrees, certificates, and work history. So, if you tell a lie that is caught later, you can be blacklisted and never allowed to give an interview for the company again.

To avoid any trouble, make sure that you remain totally honest during the interview and avoid lying about your credentials and skills.

4. Not Doing Prior Research About the Company

The interviewer will expect you to have done your research about the company before coming for an interview. Candidates who have not done proper research will come across as disorganised not being detailed enough.

To make a positive impression, you should find out as much as possible about the company. Here are some tips for researching the company before the interview.

Research about the company’s competitors by visiting the LinkedIn profile page and selecting “Other Companies People Viewed”.

You should find out only general information about the competitors and avoid wasting time looking at minor details. Find out recent news about competitors such as acquisition or diversification moves. The information will help you to tell the interviewer what makes the company special, what it can do to remain competitive, and why you have selected the company over others.

5. Being Overconfident About Abilities

Most millenarians make the mistake of overselling themselves during the interview only to find difficulty later on when selected. Being confident is a positive trait. You need to have a good sense of self-esteem. However, it’s also important that you don’t be overconfident about your skills and abilities, especially during an interview.

Being overconfident will be off-putting to interviews as well. You will appear brash and arrogant. For a good interview, you need to strike a balance between being confident and overconfident. To avoid any embarrassment later, you should always remain specific about your skills and accomplishments. You should tell exactly what you have learned over the years and how the learning can be transferred to the new position.

A lot of millennials are hesitant to sell themselves during the interview. Overselling yourself is recommended if you want to secure a job. You should tell the interviewer all about the courses taken and the experiences gained that are relevant to the position.

Never talk about politics during the interview. Don’t share your opinion about any sensitive issue. You should not assume that the interviewer will be on the same page as you politically. You may inadvertently say something that could land you at odds with the interviewer.

Always remain neutral when talking about any topic. For instance, if the topic is regarding the state of the economy, you should tell the facts without explaining why you think that the economy is in a particular state. You have the right to freely share your opinion; but not at the interview table.

Millennials often make the mistake of speaking to the interviewer as if to a close friend. Using words like cool, dude, dear, pal, high five may be appropriate in a social setting, but it won’t project a good impression during an interview.

Your speech during the interview should be professional. Avoid sloppy speech habits like using filler words such as um, like, you know, and others. Don’t use colloquialisms or slang words that you use to address your family members and friends. Your answers should be serious, courteous, concise, and to the point.

A majority of millennials don’t focus on their body language during the interview. The fact is a lot of information is conveyed through body language. Your gestures and body posture will reflect your attitude, intention, and emotions.

Here are some of the bad body language that you should avoid during an interview.

Interviewers don’t want to know why you left the place. They want to hear how you can contribute to the company. Instead of whining about the negative points of the previous company, you should inform about what abilities had helped you power through the challenging times.

Being honest is a good quality. However, this does not mean that you should reveal your negative qualities. During the interview, you need to advertise your strengths and remain silent about your weaknesses. After all, your goal is to prove that you are the best person for the role. Highlighting your negative points won’t do you any good.

For instance, suppose you had left a company due to being bored with the work, or you were fired from on disciplinary grounds. When the interviewer asks you why you had left the company, you should not state the real cause. Simply tell that you wanted to gain new experience, or you felt that there was no career growth in the company. You need to downplay your weaknesses as much as possible during the interview.

The tips mentioned here in this article will prove invaluable for job hunting millennials. With a little effort, you can avoid the common mistakes that millennials during job interviews. If an interview does not go well, you shouldn’t worry. You can find many more jobs advertised on job posting sites.